After their "virtual tie" in Iowa, Bernie Sanders and Hillary Clinton go one-on-one in fiercest debate yet 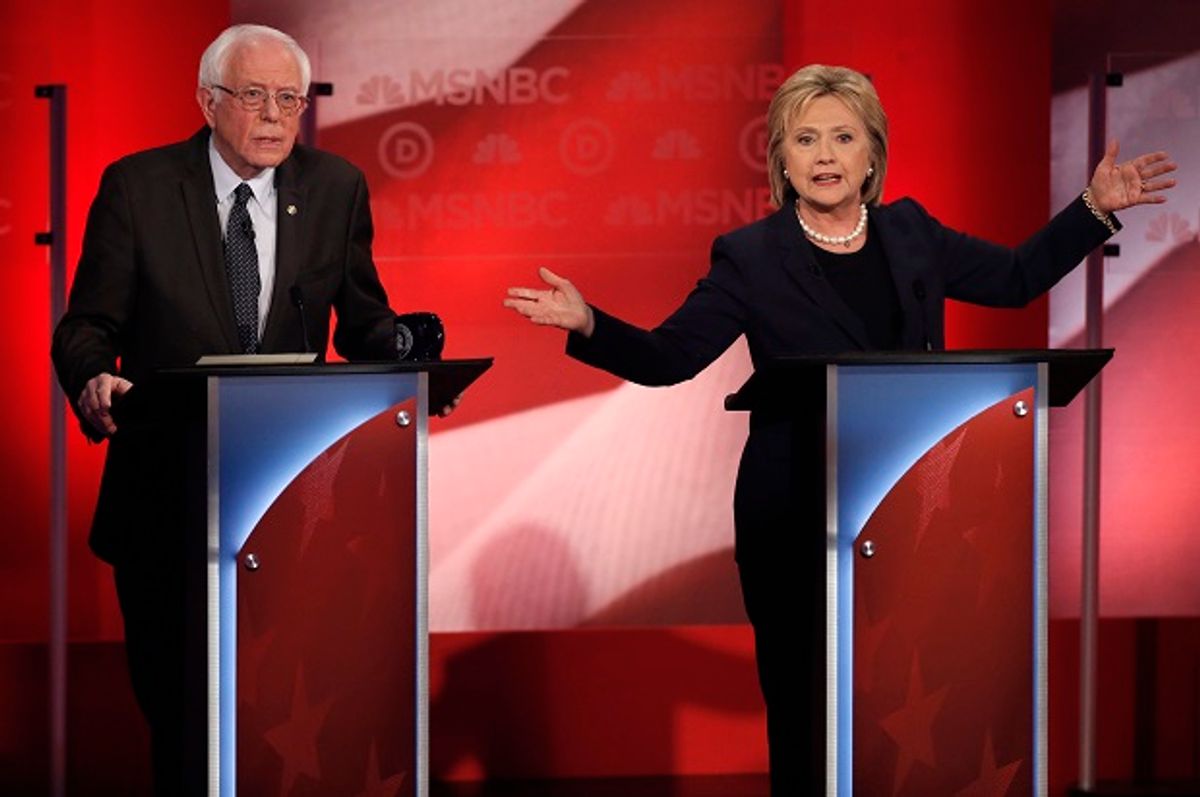 Sparks were flying Thursday night, as Hillary Clinton and Bernie Sanders went head-to-head for the first time in the Democratic presidential debate in New Hampshire.Sanders kicked off the debate lamenting that millions of Americans have given "up on the political process... because they understand the economy is rigged."

He noted most Americans are working longer hours for low wages, while almost all new income and wealth is going to the top 1 percent.He blasted the "rigged economy" and the "corrupt campaign finance system undermining American democracy, where billionaire, Wall Street, corporate America can contribute unlimited sums of money into super PACs and into candidates," calling for a reinvigoration of American democracy.

Clinton accused the Vermont senator of having "unrealistic" views. She portrayed herself as a moderate, pragmatic politician, repeating her insistence that she "likes to get things done."

The two clashed over what exactly it means to be a progressive. Sanders pointed out that Clinton has received millions in dollars from Wall Street, and argued this compromises her politics. Clinton claimed that being funded by large corporations does not mean she necessarily serves them. Sanders disagreed.

Sanders attributed Wall Street's deregulation, the U.S. paying the most in the world for prescription drugs and Republican presidential candidates not acting on climate change to one thing: Large corporations and billionaires like the Koch brothers "pouring huge amounts of money into the political system."

The self-declared Democratic Socialist boasted that he is the only presidential candidate without a Super PAC and has taken no corporate money, instead raising millions from donations from average Americans.

Former Secretary of State Clinton criticized Sanders' plans for universal health care, and took credit for Obamacare and said it is a step forward. She also spoke out against Sanders' call for free public higher education, saying "What I want to do is make sure middle-class kids, not Donald Trump's kids, get to be able to afford college."

The two candidates differed on the issue of capital punishment. Clinton made it clear that she does support the death penalty, in some cases.

Sanders said he opposes the death penalty. He emphasized that many innocent black Americans have been executed, and also argued the government should not be carrying out such acts of violence regardless.

Both candidates also expressed disgust at the poisoning of water in Flint, Michigan, with toxic levels of lead.

Clinton called the situation an "emergency," particularly for the children of the city, whose brain development and behavior can be affected by the lead. She said "what is being done is not sufficient" and called for fixing people's pipes, guaranteeing health care and providing federal assistance.

Senator Sanders' response was more aggressive. He called the situation "outrageous" and reiterated his calls for the resignation of Michigan Gov. Rick Snyder for "poisoning little kids and impacting their entire lives."

"One wonders if this were a white suburban community what kind of response there would have been," Sanders said, pointing out the double standards with which the government treated the disproportionately poor and black population of Flint.

In regards to issues concerning racism, Clinton also called for immigration reform as one of her big three issues.

The Vermont senator noted he is "absolutely supportive of comprehensive immigration reform and a path towards citizenship for 11 million people today who are living in the shadows." He also blasted the "broken criminal justice system," noting how it imprisons enormous numbers of black and Latino Americans, sending young adults to prison for drugs while a "Wall Street executive destroys the economy" and yet has no criminal record.

On foreign policy, both candidates agreed that the U.S. must support Arab and Kurdish forces in order to fight ISIS. Clinton said she opposes U.S. combat forces on the ground, but supports American special forces and trainers, along with the air campaign.

Sanders condemned Clinton for voting for the illegal U.S. invasion of Iraq, and noted that it was "the war in Iraq which created barbaric organizations like ISIS."

Clinton, who has very hawkish foreign policy positions, accused Sanders of not being aggressively anti-Iranian enough. She characterized the country as a threat to Israel and preferred siding with Saudi Arabia, which is itself an extremist theocratic absolute monarchy and yet a close ally of the U.S.

The former secretary of state, who helped lead the disastrous NATO war in Libya, accused Sanders of being too soft on foreign policy.

Sanders defended his views. "I think our great task is to make certain that our young men and women in the military do not get sucked into never-ending, perpetual warfare within the quagmire of Syria and Iraq," he said. "I will do my very best to make sure that that doesn't happen."