Bernie Sanders and Hillary Clinton clash on what it means to be a progressive: Democratic debate quickly gets heated

In their first one-on-one debate, the Democratic rivals each touted their record on progressive issues 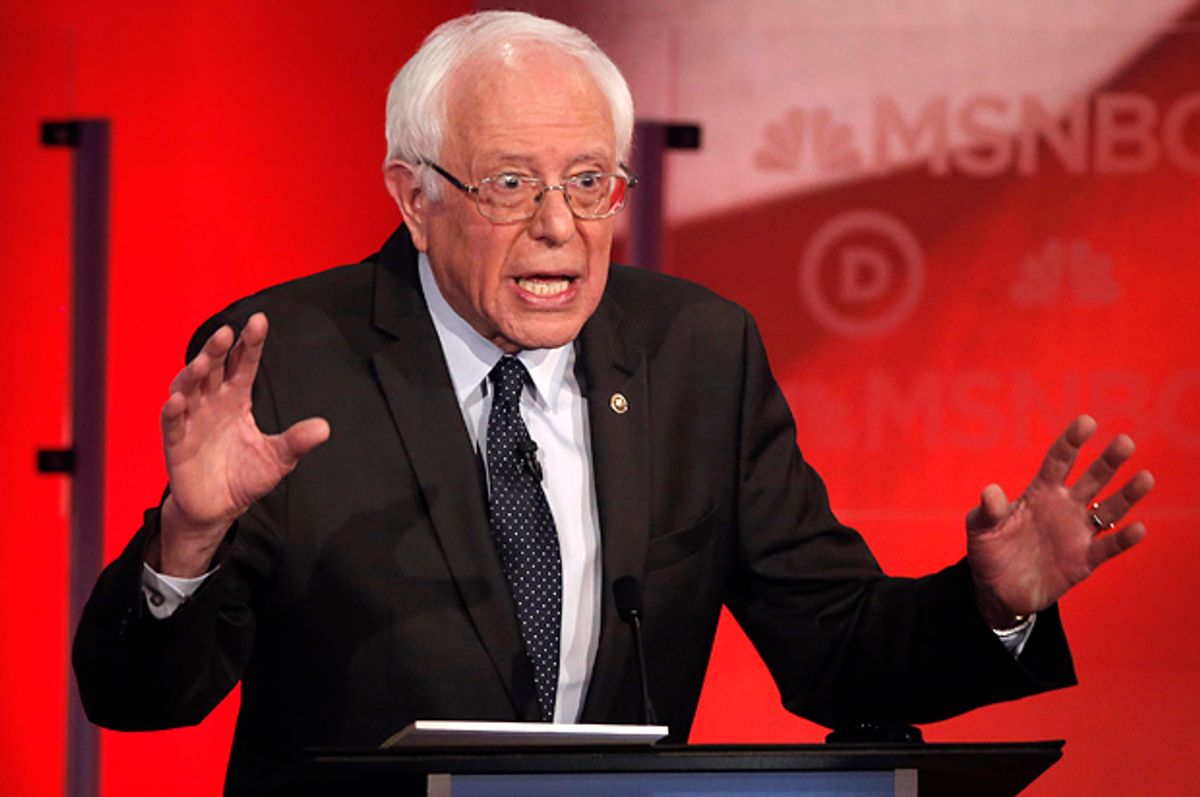 Bernie Sanders and Hillary Clinton clashed Thursday night on what exactly it means to be a progressive politician.

Clinton opened the fifth Democratic presidential debate insisting that Sanders is "making promises [he] cannot keep" in promising to implement a system of single-payer health care, and that her more conservative policies are pragmatic. Last week, she proclaimed that universal health care will "never, ever" happen in the U.S.

Sanders forcefully pushed back. "Every major country on Earth — whether it's the U.K., whether it's France, whether it's Canada — has managed to provide health care to all people as a right and they are spending significantly less per capita on health care than we are. So I do not accept the belief that the United States of America can't do that."

"I do not accept the belief that the United States of America and our government can't stand up to the ripoffs of the pharmaceutical industry which charge us by far the highest prices in the world for prescription drugs," Sanders added.

On Wednesday, Sanders argued Clinton — who has previously identified as a moderate, but now insists she is "a progressive who likes to get things done" — cannot simultaneously be both a moderate and a progressive. Sanders' campaign blasted Clinton's record, creating a long list of right-wing policies she has supported.

In the debate, Clinton responded to Sanders' critiques.

"A progressive is someone who makes progress. That's what I intend to do," she said.

What she did not mention is that, as Salon has previously reported, while Clinton often boasts about having helped children when working with Children's Defense Fund, the group later rebuked her for helping gut welfare in the 1990s.

"Hillary Clinton is an old friend, but they are not friends in politics," the president of Children's Defense Fund said in a 2007 interview. At the time, the president noted the children's rights organization "profoundly disagreed with the forms of the welfare reform bill, and we said so."

In the debate Wednesday night, the former secretary of state also took credit for inspiring the Affordable Care Act, saying "before it was called Obamacare it was called Hillarycare."

When asked if he thinks his policies are "unrealistic," as Clinton alleged, Sanders replied: "No, not at all."

"Here's the reality of American economic life today," Sanders explained. "The reality is that we have one of lowest voter turnouts of any major country on earth because so many people have given up on the political process. The reality is that there has been trillions of dollars of wealth going from the middle class in the last 30 years to the top 1/10th of 1 percent.  The reality is we that have a corrupt campaign finance system which separates the American people's needs and desires from what Congress is doing."

In response to these problems, Sanders called for building a large grassroots movement.

"Now all of the ideas that I'm talking about, they are not radical ideas," the Vermont senator continued. "Making public colleges and universities tuition free, that exists in countries all over the world, used to exist in the United States. Rebuilding our crumbling infrastructure, and creating 13 million jobs by doing away with tax loopholes that large corporations now enjoy by putting their money into the Cayman Islands and other tax havens. That is not a radical idea."

"What we need to do is to stand up to the big-money interests, and the campaign contributors," Sanders said. "When we do that, we can, in fact, transform America."

Clinton accused Sanders of oversimplifying economic problems and reducing them to Wall Street.

"Wall Street is not just one street. It is an entity of unbelievable economic and political power," Sanders replied.

He added, "The business model of Wall Street is fraud."