Bernie Sanders says he wants a revolution: Demanding reparations for racial injustice should be his next move 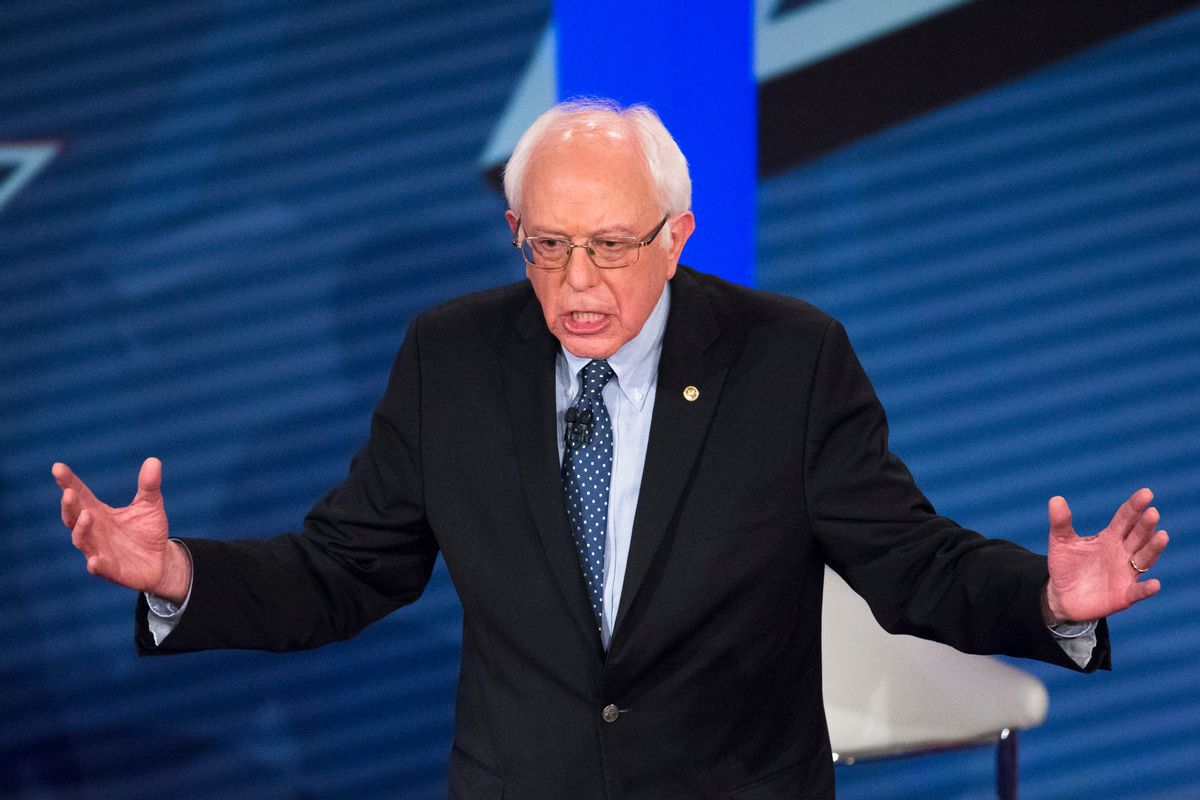 For many viewers, Hillary Clinton's closing statement during last night's debate may have come as a surprise. “We didn't even get to talk about the continuing struggles that Americans face with racism,” Clinton said. As she had noted in her opening statement two hours earlier, seemingly in response to Bernie Sanders' condemnation of a “rigged economy,” “Yes, of course, the economy has not been working for most Americans...But there's also the continuing challenges of racism, of sexism, of discrimination against the LGBT community.”

By Sanders' responses, audience members would have thought that race was at the forefront of the debate. “Too many innocent people, including minorities, African-Americans, have been executed when they were not guilty,” he noted. “One wonders if this were a white suburban community what kind of response their would have been,” he posited on the crisis in Flint. He bemoaned the state of “a broken criminal justice system, which today allows us to have more people in jail than in any other country – largely African-American and Latino.”

None of the candidates' comments were glaringly noteworthy, but they did reflect an ongoing tension simmering beneath the surface of the Democratic primary — and in particular, the question of whether Sanders' platform of economic justice is missing a crucial component.

During the ABC News Debate in late December, David Muir highlighted Hillary Clinton's friendly relationship with business executives. “The last time you ran for president, Fortune Magazine put you on its cover with the headline Business Loves Hillary, pointing out your support for many CEOs in corporate America,” Muir said. “Eight years later, should corporate America love Hillary Clinton?”

“Everybody should,” Clinton responded to laughter and applause. “I want to be the president for the struggling, the striving and the successful.”

Sanders, asked the same question, took a different tact. “No, I think they won't,” he answered bluntly, inspiring laughter and applause as well. “The CEOs of large multinationals may like Hillary. They ain't going to like me and Wall Street is going to like me even less.”

Sanders could certainly have taken a different approach, and, like Clinton, invoked the tone of a grand unifier. He could have appealed to more high-minded tenets of a healthy society, claiming that, on a fundamental level, we all benefit from living in a community wherein the sick are treated and the hungry are fed and the curious are educated. Instead, he recognized that his policies were likely to leave wealthy executives immediately, materially worse off. He further recognized that voters are primarily concerned with self-interest — that is, in fact, how democracies function. And so he, both in that moment and throughout the course of his campaign, made clear that he neither needed nor wanted the support of the 1 percent.

Sanders' tone when addressing the racist and xenophobic appeals of Republican frontrunners was strikingly different. Rather than speaking to the concerns of minority communities, he addressed the anxiety of the racists and xenophobes, claiming that economic insecurity left them ripe for exploitation. “Somebody like a Trump comes along and says, 'I know the answers. The answer is that...we've got to hate the Mexicans...We've got to hate the Muslims.' Meanwhile, the rich get richer.” Sanders made an appeal to Trump supporters to deeply consider Trump's policy proposals, proposals which he argued would only intensify their economic woes. A grand unifier in some regards, he made clear who the real enemy was. “Let's create an America that works for all of us, not the handful on top,” he closed.

This approach, and the question of whether class inequity leads to race inequity or vice versa, lies at the heart of an ongoing debate about Sanders' refusal to support reparations for racist government policies. Asked whether he supported reparations for slavery, Sanders responded “No, I don’t think so. First of all, its likelihood of getting through Congress is nil. Second of all, I think it would be very divisive.” Ta-Nehisi Coates writes, “The spectacle of a socialist candidate opposing reparations as 'divisive' (there are few political labels more divisive in the minds of Americans than socialist) is only rivaled by the implausibility of Sanders posing as a pragmatist.”

Whether Sanders is truly a pragmatist is up for debate. Sanders' policies, with the notable exception of single-payer healthcare, tend to have high levels of public support. Some argue that these policies only seem radical because of the corrupting influence of moneyed interest, but aren't truly out of step with the American electorate.

But on the question of divisiveness, Sanders has indisputably attempted to sharpen and benefit from class tension. Reparations aren't unacceptable to Sanders because they are a divisive issue amongst the American people, but because they're a divisive issue amongst the coalition he's trying to build. Sanders isn't wrong, by the way, to note that economic hardship makes people uniquely susceptible to demagoguery. However, his debate night plea was implicitly an ask that minorities, whose support Democrats have traditionally relied upon, make bedfellows out of those who, by Sanders' own admission, don't much care for them.

For such voters, the question of reparations is a pressing one. One can point to Sanders' policies and argue what the senator hinted at last night– that they are hugely beneficial to black Americans, who disproportionately languish in poverty and in prisons. But such voters are pragmatic as well. Presidents are not dictators; policy proposals during a campaign are all rhetorical. They aren't concretely representative of the laws that will be passed, but symbolic statements of broader governing philosophies. Black voters, who Sanders hopes will align with those who have historically despised them, are as interested as Wall Street bankers in tangible outcomes. They want to know that their best interests will not be sacrificed in the messy process of turning campaign promises into political realities. That Sanders only supports moral policy when it has majority support isn't especially comforting to the minority.

Particularly because, much as Sanders' policies are unlikely to make him friends in the board room, redressing racial injustice in America must, inherently, materially benefit racial minorities at the majority's expense. Since Coates's seminal Case for Reparations was published in 2014, a common refrain has been to deny this reality, suggesting that reparations can be paid via policies like criminal justice reform and poverty alleviation. At the very least, we ought to recognize that these are not reparations at all.

Providing citizens with clean water and preventing their slaughter by armed agents of the state are baseline requirements of a competent government. Establishing a healthy, functioning economy, rather than one distorted by high levels of income inequality, providing public goods where private markets fall short, ensuring baseline standards of living — this is all the work of governing. These are entirely separate issues from compensating citizens for their government's explicit sins against them and attempting, belatedly, to make them whole. Good governance and reparations are not mutually exclusive; both are obligatory. But unlike good governance, racial justice is not a means. It is an end.

Sanders' supporters like to respond to critiques of his policy by arguing that he's better than the alternatives. Why pick on him, they say, when, if we take all the candidates' proposals at face value, black voters stand to gain the most from a Sanders presidency? But the primary is precisely the time to play out these disputes publicly. The candidates who are asking for, who will indeed rely upon, minority support are the ones who are most likely to formulate policies that, in turn, support those minorities. Those policies are not set in stone — they are the result of messy and heated negotiations between a candidate and the electorate. Those negotiations are toothless if they come with a default presumption of support.

Sanders supporters are flouting the conventional wisdom that change must come in painstakingly slow increments, and are unapologetically advancing their own interests. And just as lower class voters have the right to advance those interests by emphasizing government benefits, black voters have the right– arguably, the civic responsibility – to emphasize racial economic justice. And there's nothing petty about doing so. If citizens can't demand that candidates do more, and do better, during an election year, why bother having elections at all?