Hillary Clinton still hasn’t figured out her Wall Street problems, and they keep on causing trouble 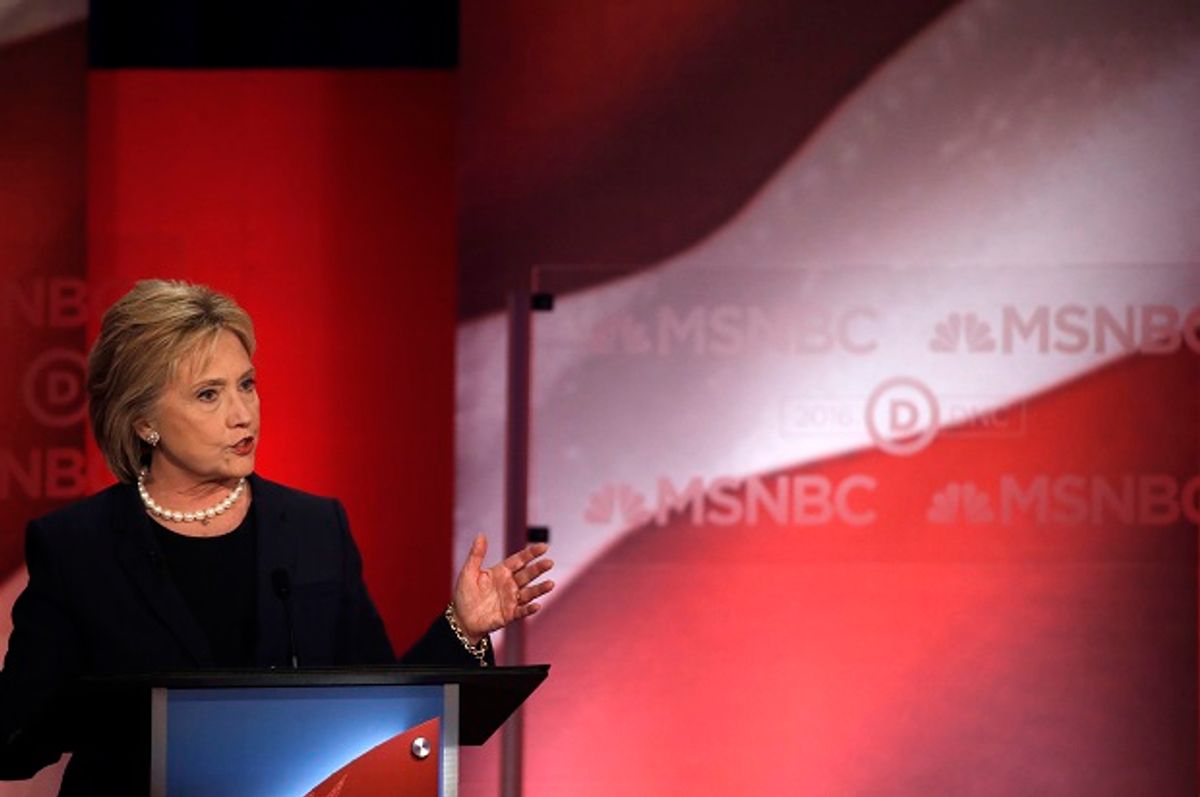 Thursday night’s Democratic presidential debate gave you pretty much everything you would need to make your choice between Hillary Clinton and Bernie Sanders. Perhaps it was because this was the first debate in which the two were pitted against each other without any also-rans to steal some attention, but their differences were laid out as starkly as ever, and voters got to see both candidates at their strongest and at their weakest.

Hillary made her case that she’s a “progressive who gets things done,” offering herself as a realist contrast to the idealistic fervor of Sanders and his “political revolution” – at one point she even said outright that “I’m not going to make promises I can’t keep.” Clinton had an effective retort to the Sanders campaign’s effort to impose an ideological purity standard on the race, ticking off a number of popular Democratic politicians and liberal icons who would fall short of Bernie’s definition of “progressive.” And, as has become commonplace, she demonstrated a far greater depth of knowledge and fluency surrounding foreign affairs than Bernie brings to the table. It was the Hillary pitch we’ve been hearing for well over a decade now: pragmatic, tough, and focused heavily on her own record of accomplishment.

The problem for Hillary is that she still doesn’t have an effective response to concerns over her ties to Wall Street. A good chunk of the early debate was focused on the financial sector and whether Hillary can really cast herself as an adversary of Wall Street when her campaign rakes in donations from big banks and Goldman Sachs paid her $675,000 for three speeches. When asked by MSNBC moderator Rachel Maddow about those speaking fees, Hillary had a bad answer:

CLINTON: Well you know, Rachel, I think I may not have done the job I should in explaining my record. You know, I did -- when I left the secretary of State's office, like so many former officials, military leaders, journalists, others, I did go on the speaking circuit. I spoke to heart doctors, I spoke to the American Camping Association, I spoke to auto dealers, and yes, I spoke to firms on Wall Street. They wanted me to talk about the world, what my experience had been as secretary of State.

From there she pivoted to her standard spiel about how Wall Street guys are funding groups that attack her and she’s the only person who can fight them because she’s fought them before. She has a point about how the receipt of political donations from a given industry does not automatically mean you’ve been bought, but the issue goes beyond that. For me, the problem with this answer and with Clinton’s speaking fees isn’t that they show that she’s in the thrall of banks or corrupted by the financial system – it’s more a question of being part of the problem.

She gave those speeches because it was easy money. She hinted as much in her answer: going “on the speaking circuit” is a nice little euphemism for cashing in on your name and reputation. It’s objectively weird that someone is willing to pay anybody $675,000 to “talk about the world,” and anyone who collects those fees and also wants to secure the presidential nomination of a party that rails against income inequality is going to run into some political problems. Imagine a voter – a young voter, in particular – who is getting screwed by slow job growth and wage stagnation watching Hillary try and explain away as meaningless the fact that a bank paid more than ten times the median annual income for three speeches.

This might not be such a problem for her if she weren’t running against a candidate who expertly captures the frustrations Democratic voters have with the economy. Hillary essentially argues for the acceptance of Wall Street practices as an economic reality while pushing for tighter regulation and oversight. She wants to “rein in the excesses of Wall Street.” Sanders, on the other hand, wants to break things and collect scalps. “In a sense, in my view, the business model of Wall Street is fraud,” Bernie said at last night’s debate. “It's fraud.”

Sanders’ big weakness, on the other hand, continues to be foreign policy. It’s still thoroughly obvious that he has difficulty moving beyond vague talking points, and he still hasn’t figured out how to needle Clinton on her own foreign policy weaknesses. When asked how he’d handle the withdrawal of troops from Afghanistan, Sanders said he doesn’t want to get U.S. troops stuck “within the quagmire of Syria and Iraq.” When asked again what he’d do about Afghanistan, he said we “can’t simply withdraw tomorrow,” and then immediately shifted to Iraq again. Clinton seized the opportunity to pile on Sanders and make the case, both explicitly and by virtue of comparison, that he’s ill-prepared for the job of commander-in-chief.

The problem for Clinton is that not all weaknesses are created equal. Economic anxiety is clearly a more powerful issue for Democratic voters than national security. Bernie’s been comparatively weak on foreign policy since the beginning, and it hasn’t stopped him from mounting a credible challenge to the former Secretary of State. Clinton’s been stumbling on Wall Street for a long time too, and it just keeps on causing her trouble.