In debate, Hillary Clinton boasted that she is supported by Henry Kissinger, accused war criminal who oversaw policies that led to millions of deaths 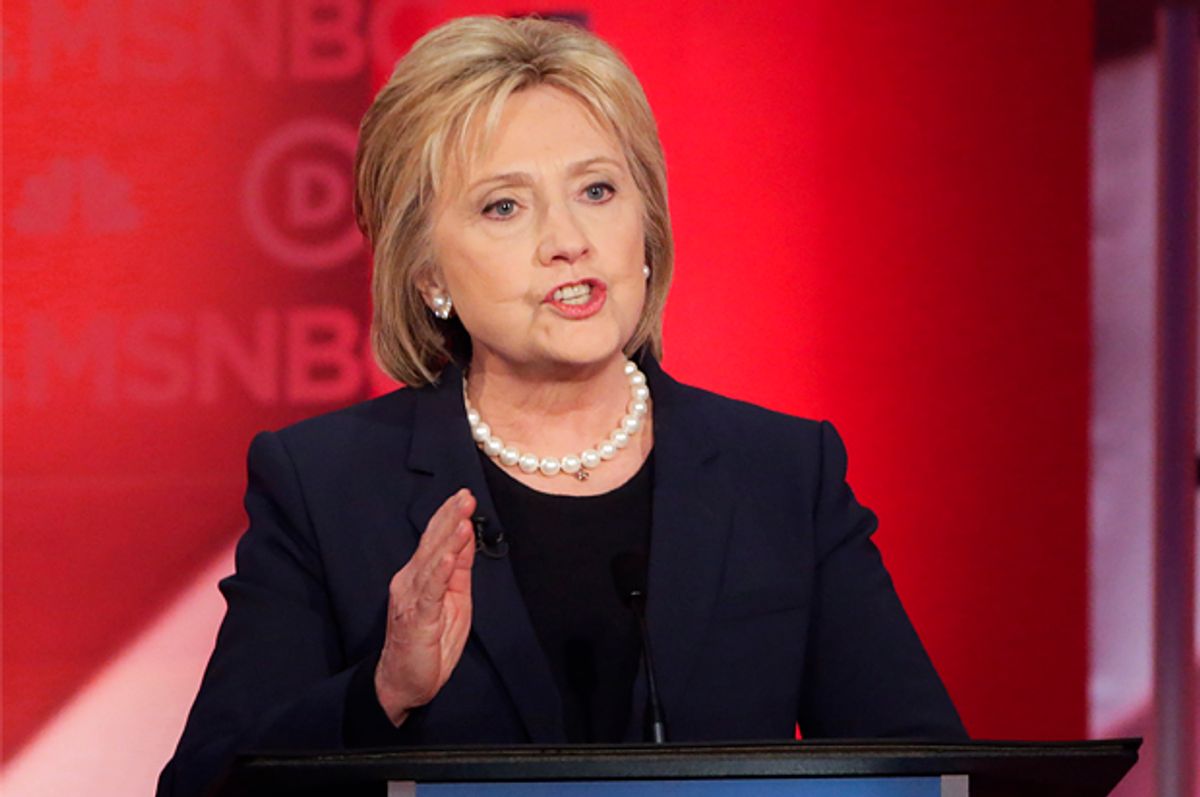 Hillary Clinton boasted in the fifth Democratic presidential debate Thursday night that she is supported by former Secretary of State Henry Kissinger, an accused war criminal who oversaw policies that led to the deaths of millions of people.

"I was very flattered when Henry Kissinger said I ran the State Department better than anybody had run it in a long time," she said.

Salon has previously exposed how emails released from Clinton's time as secretary of state for the Obama administration reveal her close ties to Kissinger. One of the emails suggests that Clinton saw Kissinger as her role model.

Kissinger infamously insisted "The illegal we do immediately; the unconstitutional takes a little longer."

In his book "The Trial of Henry Kissinger," the late journalist Christopher Hitchens detailed the war crimes Kissinger partook in. Hitchens described Kissinger as a master of "depraved realpolitik" with "a callous indifference to human life and human rights" who is complicit in U.S.-backed atrocities in Vietnam, Cambodia, Laos, East Timor, Chile, Bangladesh, Cyprus, Kurdish Iraq, Iran, South Africa, Angola and more.

Hitchens argued the former secretary of state should be tried in court "for war crimes, for crimes against humanity, and for offenses against common or customary or international law, including conspiracy to commit murder, kidnap and torture."

Kissinger's list of misdeeds is incredibly long, but the following are just a few that Salon has previously reported.

In the 1970s, Kissinger met with Nazis to offer help on overthrowing West Germany's left-leaning government.

When the Khmer Rouge was carrying out genocide in Cambodia in 1975, killing millions of people, Kissinger declared "You should tell the Cambodians that we will be friends with them."

"We are prepared to improve relations with them," he said, adding "They are murderous thugs, but we won’t let that stand in the way."

Kissinger also met with representatives from far-right Latin American dictatorships and told them the U.S. would help them "to succeed" in their campaign of systematic state terrorism against left-wing movements, known as Operation Condor.

When popular Marxist leader Salvador Allende was democratically elected president of Chile in 1970, Kissinger and Nixon ordered the U.S. government to "make the economy scream."

"The issues are much too important for the Chilean voters to be left to decide for themselves," Kissinger boldly proclaimed. The CIA then violently overthrew Chile's democratically elected socialist government on Sept. 11, 1973 — the first 9/11 attack, if you will.

On the 40th anniversary of the violent coup that installed far-right dictator Augusto Pinochet, Kissinger met with Secretary of State John Kerry, giving him advice on U.S. policy.

Kissinger also promoted a "madman" strategy in the U.S. war in Vietnam, in which approximately 3 million Vietnamese were killed. Kissinger's strategy was to make the U.S.'s enemies believe it "might be crazy" enough to drop a nuclear bomb on them.

In "The Trial of Henry Kissinger," Christopher Hitchens accused Kissinger of the following crimes, recommending that they be tried in international court:

1. The deliberate mass killing of civilian populations in Indochina.
2. Deliberate collusion in mass murder, and later in assassination, in Bangladesh.
3. The personal suborning and planning of murder, of a senior constitutional officer in a democratic nation — Chile — with which the United States was not at war.
4. Personal involvement in a plan to murder the head of state in the democratic nation of Cyprus.
5. The incitement and enabling of genocide in East Timor
6. Personal involvement in a plan to kidnap and murder a journalist living in Washington, D.C.

Kissinger has returned the admiration to former Secretary Clinton. In 2012, he sent Clinton an intimate handwritten message, stating "I greatly admire the skill and aplomb with which you conduct our foreign policy."