Meet the comedians behind the "Trump vs. Bernie" debate tour

They're putting the "mock" in "mock debate" 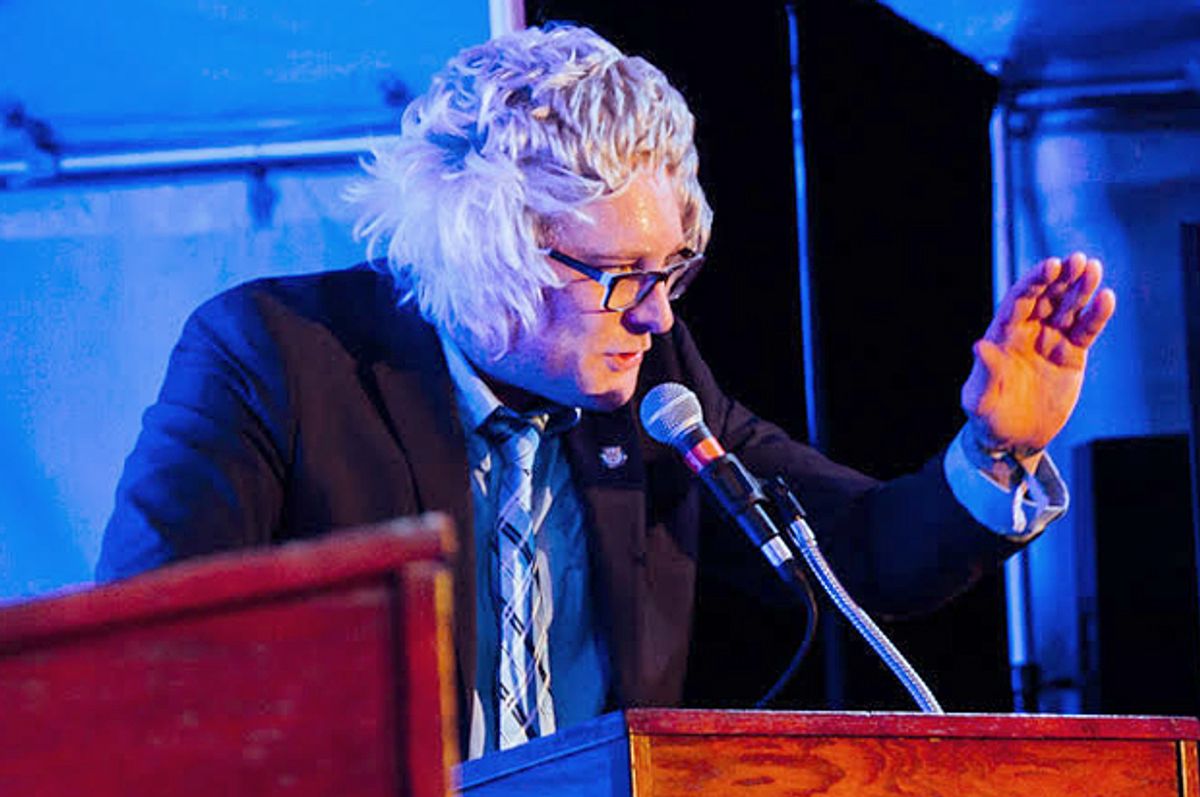 While Bernie Sanders was singing “This Land Is Your Land” with Vampire Weekend last Saturday in Iowa, on the way to a strong second-place finish in that state's caucuses two days later, comedians James Adomian and Anthony Atamanuik were blurring the lines between reality and satire during a rowdy debate as Sanders and Donald Trump, respectively, in front of a packed comedy festival audience in Los Angeles.

The debate, held at the Riot LA alternative comedy festival, was the starting point of a 12-city tour that will take them all over the country over the month of February, continuing with Madison, WI on Feb. 2, to cities like Minneapolis, Chicago, Burlington, VT, Philadelphia, Washington D.C. and Austin, TX on the 29th.

As far as election years go, it’s hard to remember one with more fodder for comedy on both sides of the aisle. Atamanuik recalled the 1976 election, when Ronald Reagan made a run at Gerald Ford, and 1980’s Jimmy Carter vs. Ted Kennedy contest as the only ones that come close.

“I think those two had some of the wildness, but this has the most unpredictability in terms of a completely incompetent person becoming president,” Atamanuik said in an interview with Atamanuik before Saturday's mock debate.

“We’re trying to be in the middle of it,” Adomian explained. “We’re on the road like we’re running for office.”

“I think once we start going day-to-day events it’s going to feel like that,” Atamanuik added.

While "Saturday Night Live" recruited comedy heavy hitters Darrell Hammond and Larry David to portray the primary candidates, Atamanuik and Adomian had been separately performing their respective impressions across the country from each other, one in NY and one in LA. It was Adomian’s idea to bring the two together for an “unsanctioned bipartisan exhibition debate”

“I was doing Bernie Sanders out here in LA, and I heard about Tony doing Trump in New York,” Adomian said, which lead to him coming out to NYC to join Atamanuik at the Upright Citizens Brigade Theater for their first debate back in October. The UCB show was only 20-minutes, but a six-minute clip online brought enough attention to sell out a second, hour-long debate at the Bell House in November. That one was also recorded, but instead of releasing it online, they decided to take the show on the road.

What audiences can expect from the debates is a passionate, semi-scripted exchange between the candidates that often overpowers the moderator—in this case, comedian Neil Casey—and on a more surreal level, a look ahead into an electoral future that could possibly exclude the woman dominating so much of the Democratic party narrative, Hillary Clinton.

Whether or not the real-life Sanders secures the nomination, he has already won much of the comedian vote, as comics from the super-famous to the up-and-coming host benefit shows and attend rallies in support of the Democratic socialist. And with comedians go comedy fans.

The audience at the Riot LA debate knew they were at a comedy show, of course, but were quick to react to Adomian-as-Sanders’s good points (however outrageously stated) with earnest applause, almost as if the real man was talking. On the other hand, Atamanuik-as-Trump was only booed once, upon first taking the stage, and was welcomed as a joke for the remainder of the show.

That, plus the comedians’ vocal support for Sanders combined with the “campaign trail” nature of going on the road, makes it even more like they are really stumping for Bernie rather than lampooning him. More importantly -- and perhaps the more serious point of their comedy -- they want to make sure that people don’t underestimate Trump.

“Liberal audiences need to understand that they’re as culpable for Trump as the right wing,” Atamanuik said. “They’re as responsible for making sure that we don’t only perceive him as a sideshow without understanding his danger. We got [George W.] Bush because we deserved Bush, and no one wants to say that. He stole the election, but we got him because it was close enough that he could steal it.”

While both comedians have the voice of their respective candidates down pat, Atamanuik’s physical impersonation of Trump is particularly impressive—his “Make America Great Again” hat paired with bronzed, emoji-esque facial expressions are eerily similar to the real thing. But Atamanuik thinks Adomian, who simply dons a wild, grey wig and focuses most of his physical energy on Sanders’ flailing arms, has the harder job.

“I hated doing it, the minute I started doing [Trump],” Atamanuik said. “I feel like, even when I mock Trump, I’m giving him good points, which is frightening.”

“It feels bad to play a bad guy,” Adomian empathized. “I did George W. Bush for years, and I hated him. But you have to give full voice to the villains. You have to have really convincing villains or it’s not worth anything as drama or comedy.”

On the other hand, Adomian’s appreciation of Sanders comes through in his impression: “I’m making fun of how he looks and sounds, and some of his tics and mannerisms, but most of the time I’m amplifying his message in a kind of clownish way.”

“I would say that [Adomian] has it more difficult—to play someone you like and support and make them funny, but also not undermine them, is such a complex feat,” Atamanuik said. “I’m always impressed by that.”

Adomian repaid the compliment: “Well, I love the places that Tony takes Donald Trump to, because I think that’s what Trump’s really saying,” he said.

While both comedians are hoping that Sanders gets the Democratic nomination for political reasons, it also has a benefit for their comedy’s sake. And If Trump becomes the GOP candidate, they could keep the bit going until November. However, neither see the latter scenario as a funny option.

“I would be very nervous that this guy could actually become the President,” Atamanuik said. “I could see the press sitting there at 10 at night on election [day], saying, ‘Donald Trump has been elected President Of The United States,’ in that sad, somber, horrified tone.”

“And that’s unique, because that would be the tone not only on MSNBC but on Fox News, because they hate the guy too,” Adomian added.

But the important question is, as similarly boisterous New York natives, could the real-life Bernie and Trump ever get along, even for a day?

“They’d ride the G train together, you know, 'cause Trump’s from Queens and Bernie’s from Brooklyn,” Adomian imagined, to which Atamanuik followed up: “They’d go to Coney Island, grab some Nathan’s hot dogs, and have an argument beach-side.”

Slipping into Sanders, Adomian extended the bit: “I think the Coney Island Cyclone is too representative of Capitalism—going up and going down!”

Trump was quick to reply: “Then why don’t you go ride the Wonder Wheel, because you’re just going in circles, Bernie!”