A fight for the party's soul: What's really at stake in Bernie vs. Hillary

Revolution versus evolution. Passion versus pragmatism. This primary has laid bare a bitter divide among Democrats 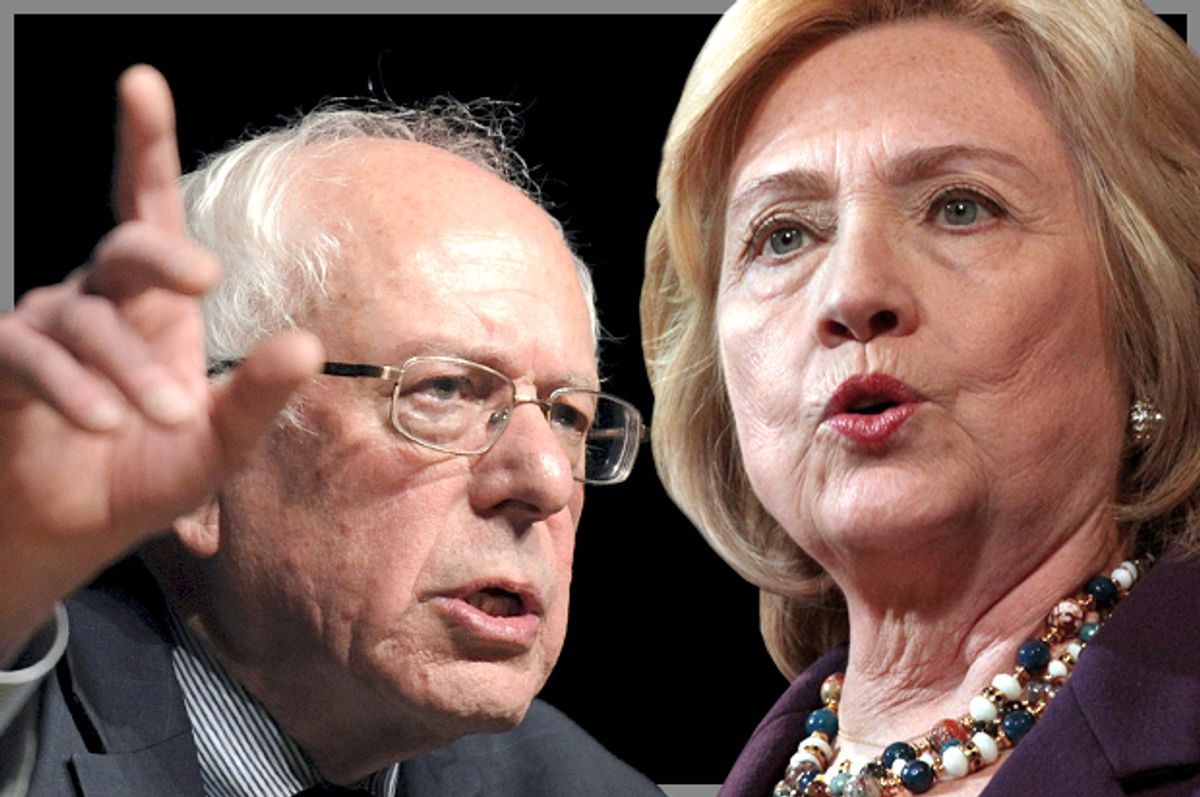 Revolution versus evolution. Passion versus pragmatism. Outsiders versus insiders. These are just some of the big schisms facing Democratic voters in the party's growing conundrum of having to choose between Bernie Sanders and Hillary Clinton.

On Monday night, both candidates pledged to keep fighting for the soul of the party, to win voters’ trust in upcoming primaries and caucuses, and to lead the country toward a future guided by its better angels come November’s presidential election. But make no mistake; the future is far from clear.

No matter what happens in coming weeks until a nominee is chosen, a party split into two fervent factions means there will be a tough, perhaps bitter competition. How will that play out? And how will it affect Democrats’ chances this fall?

The way Clinton handled it Monday night may not bode well. Assuming she is the nominee, it will help her to connect with the people her campaign will need to win — especially Sanders’ younger, fresher and more passionate grassroots base. He won an astounding 70 percent of Iowa Democrats under age 30.

When Clinton spoke Monday night after the caucuses, she said, “It is rare that we have the opportunity we do now to have a real contest of ideas; to really think hard about what the Democratic Party stands for and what we want the future of our country to look like.” And she added a perhaps misguided pitch to Sanders’ crowd. “I am a progressive that gets things done for people.”

It is revealing that last line brought boos from Sanders’ supporters. But there’s more to this than simply saying the party will be debating what Democrats truly stand for and who’s best suited to carry that message. The fact that Clinton didn’t lose—but didn’t clearly win—Iowa’s caucuses—quite possibly becauseIowa’s Democratic Party deliberately slowed down announcing the night’s results—underscores both Clinton’s weaknesses and what her campaign lacks.

For months, polls have found enthusiasm levels for Clinton backers to be low, while questions about her trustworthiness especially high among young voters. Clinton’s advisors said Tuesday they knew Iowa was not going to be a strong showing, just as they predicted that its similarity to Sanders’ nearly all-white home state of Vermont would play to his advantage.

Clinton’s supporters also were saying she was best under pressure and we will soon see that side of Hillary as she goes to New Hampshire as an underdog, given Sanders’ double-digit lead in polls there. But Americans and the Sanders team saw the real Clinton on Monday night, when she announced that she won before the results were tallied, pushing the headlines into saying victory or tie — but not a loss.

On Tuesday, Sanders’ campaign manager Jeff Weaver said there were many unanswered questions about how the Iowa party tallied and awarded delegates. “As an empirical matter, we’re not likely to ever know what the actual result was,” he said, citing the razor-thin finish, “arcane” caucus rules, delayed reporting of precincts and counting technology used.

Sanders won’t contest the result, his campaign said. Both candidates will end up essentially splitting Iowa’s delegates. But Clinton’s headline-grabbing move does not endear her to Sanders supporters, who are ready to follow him all the way to the Democratic National Convention next summer.

In the shortest of short runs, the odds are in Sanders’ favor. In New Hampshire, he’s ahead by double-digits. But then the contest literally goes south to primaries and caucuses in Nevada, South Carolina and a dozen states on March 1. Clinton is favored in many of the big post-New Hampshire states, because of decades of relationships with politicians, leaders in communities of color and party activists.

Clinton is still the party’s presumed nominee in 2016. Several hundred so-called super delegates, who are the top elected Democratic officials in Congress and the states, support her. That calculus still holds despite Sanders’ photo finish in Iowa and his lead going into New Hampshire.

It’s one thing for Clinton and Sanders to debate whether Democrats need an idealist or realist — and which one of them fits that bill. But if she relies on tactics to win in the short run — like grabbing the progressive mantle in Monday night’s speech prematurely claiming victory — it could haunt her come the fall if she’s the nominee, because it may alienate the young Democrats her campaign will need.

In politics, winning is almost everything. But how one wins matters, especially when one of the top themes raised by your opponent—in this case, Sanders—is restoring fairness across America and challenging a rigged system.