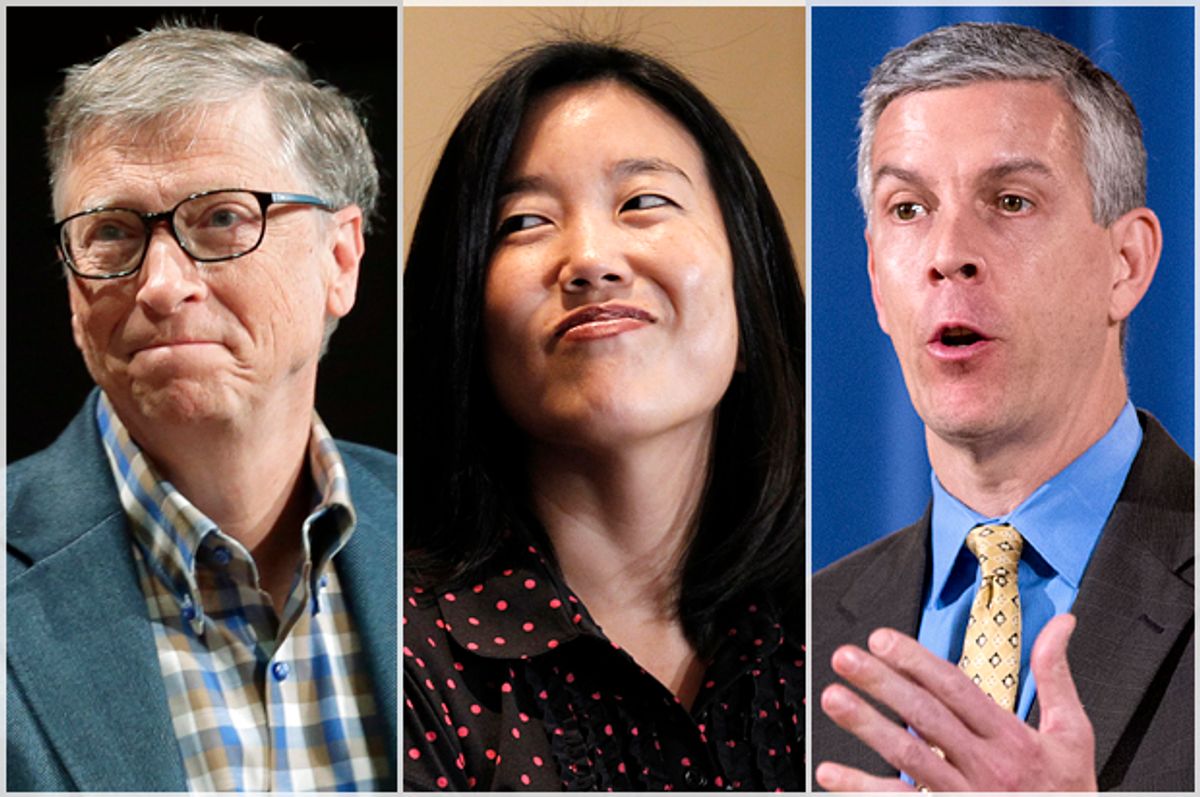 When it comes to the world of elite education reform — the land dominated by the Bill and Melinda Gates Foundation, the Broad Foundation; your Arne Duncans and Michelle Rhees — there is no shortage of young and optimistic millennials, eager to explain why the brave new future of standardized testing, pay-for-performance, "grit" and Common Core will help public (and pseudo-public) education fix many of our society and economy's ills. They're often called thinkfluencers, or something equivalently silly; and the scene is lousy with 'em.

Nikhil Goyal, a young education activist and author, comes from an entirely different angle — which is why his upcoming book, "Schools on Trial: How Freedom and Creativity Can Fix Our Educational Malpractice," which will be released on Feb. 16, makes for bracing reading. In the book, Goyal rejects some of the most foundational aspects of not only the reform movement, but the public education system that preceded it. And he argues that "progressive education" is not only a better alternative in the abstract, but a better match for the 21st century economy.

Recently, Salon spoke over the phone with Goyal about his book, as well as his views on how education policy factors into the 2016 presidential campaign. Our conversation can be found below and has been edited for clarity and length.

There's been a lot of discussion in the past 10 years or so of the way the education reform movement has fallen short or been misguided. (There have been plenty of defenses of the movement, too, of course.) What did you want your book to add to the conversation that you felt wasn't being said already?

In the past decade the United States has seen two major pieces of legislation for programs, No Child Left Behind under President Bush, and Race to the Top under President Obama. I would argue this decade of education policy [has been] characterized by neoliberal corporate education reform. And that is essentially high-stakes standardized testing, school closings, paper performance in regards to teachers — really ruthless accountability measures. [There's also] a general sense that school should be operating like a business, and education should do more to serve the interests of corporations and the affluent, as opposed to children and educators. And I'm very critical about [all] that in the book.

I also wanted to not only talk about some of the major problems with corporate education reform, but also explain and reveal to the public that there are really successful and effective models of education already existent in this country and the world. Many of those models fall under the umbrella of "progressive education"; democratic education, child-centered forms of learning. In the book, I talk about how I went from Chicago to Brooklyn to Boston to San Francisco and visited many schools, very unique in their own form, that are based on some of these principals: autonomy in learning, trust, equal relationships between students and teachers, treating the community as a classroom, letting children engage in a hands-on project, based on experience or learning opportunities.

What about scale, though? Isn't that often the challenge with these alternative models — how to implement them on a much, much larger scale?

I think it’s one of the issues. I don’t think it’s the absolute most important, but it’s a thing we need to look at. I would argue the progressive democratic school constitutes less than 5 percent of the schools that are existent in the United States and there are many private schools that are in this model, as well as some public. But you have lots of networks of these schools. So scale is an issue, but I think one of the things we need to strive for is focusing on common principles of what we want to see in schools and then letting communities work on creating schools that fit those principles.

What if parents in these communities are hesitant to adopt these new models, which may not be looked kindly upon by colleges or employers, because their children's margin for error is so much thinner? These people have often been some of the most prominent — in the media, at least — champions of charter schools. How do you address those concerns and persuade folks that they're not letting their kids' future become part of a political experiment?

Poor parents of color who look at their public school and say, “If my kid goes to that school, they’re likely not going to get a good job and they’re probably not going to go to college, they’re going to drop out and work in minimum/low wage jobs for the rest of their life” — I think it’s a legitimate fear and concern parents of color have, and that’s one of the reasons they send their kids to charter schools. They believe that the charter school is going to help them get into college and do well later on in life.

What I’d say is, the evidence is pretty clear that schools have very little influence in terms of economic status. There’s obviously people who go through traditional schooling and rise up out of poverty; but, largely, what economists and social scientists have been saying for decades now is that the education system reinforces — and reproduces — the existing social order. In a progressive school, the chances that you have of gaining the social skills and knowledge [necessary to succeed within] this economy are probably greater. Primarily because, in those types of schools, the students are directly engaging with the real world; they’re gaining [human] capital that many poor kids never have the chance to do in a traditional school environment.

So you're saying that it's not about these kids being educated in a way that's more in keeping with an alternative economy, but that even by the terms of the economic system we have today, kids at progressive schools are better prepared?

One of the criticisms of progressive education is that it cannot deliver the kind of cultural capital — and the codes of power — that poor kids of color need to succeed in the global economy. But there’s a progressive consortium of schools in New York City called the New York Performance Standards Consortium, and these schools have lower dropout rates, higher levels of student engagement, higher graduation rates — and the graduates that I’ve come across do well in college because they have the skillset necessary for that kind of work, as opposed to somebody who just regurgitates information [for a standardized test] and doesn’t really think critically. That person may graduate, but their chances of college success are probably much less than a kid who was really able to learn how to think and solve problems and make decisions.

What role do you envision for teachers unions here? As you know, they can often be small-c conservative institutions, by which I mean they can be averse to change, in a policy-neutral sense.

If you look at the teachers unions around the country, there are very few unions, unfortunately, that have taken really bold and progressive stances when it comes to education. I’m really sorry to say that the two major teachers’ unions — the AFT and the NEA —  have endorsed Hillary Clinton, have largely [supported] Common Core, and have not taken very strong stances in opposing some of President Obama's education policies.

On the other hand, you have organizations such as the Chicago Teachers Union, which I would say is probably one of the best teachers unions that exists in the country today. They have taken very militant and strong stances against corporate neoliberal education reform; and they have staged marches and protests attacking the hypocrisy and the corporate control of education. I applaud their efforts greatly, and I think that that more militant grassroots organization, where they tap into existing communities — bringing parents [in] and bringing students [in] — is a much better direction for teachers unions.

So I think there is some positive development in that regard; but I wish the major teachers unions in this country would endorse somebody like Sen. Bernie Sanders and take much stronger stances against the neoliberal state of public education.

Since you mentioned Sanders, what would you expect on education policy from a hypothetical President Hillary Clinton?

From a President Clinton, unfortunately, I don’t expect anything better than what we’ve seen under President Obama. I don’t expect her to be any better; I think she’s still a proponent of charter schools and this pay-for-performance model. She does not support free higher education, as Bernie Sanders does. Bernie Sanders is a man who, in the 1960s and '70s, during the Free School movement and during this countercultural revolution, was advocating for more child-centered education. As someone who talks about attacking and fighting against the corporate influence on our economy and our society, I think this is an issue where he would take the reins and push for a more progressive policy on education.