The NFL machine grinds on: I love football, but I can't watch Super Bowl 50 — or the game, ever again

For too long, I looked past what I knew about the sport so I could enjoy it—but I can't ignore the truth anymore 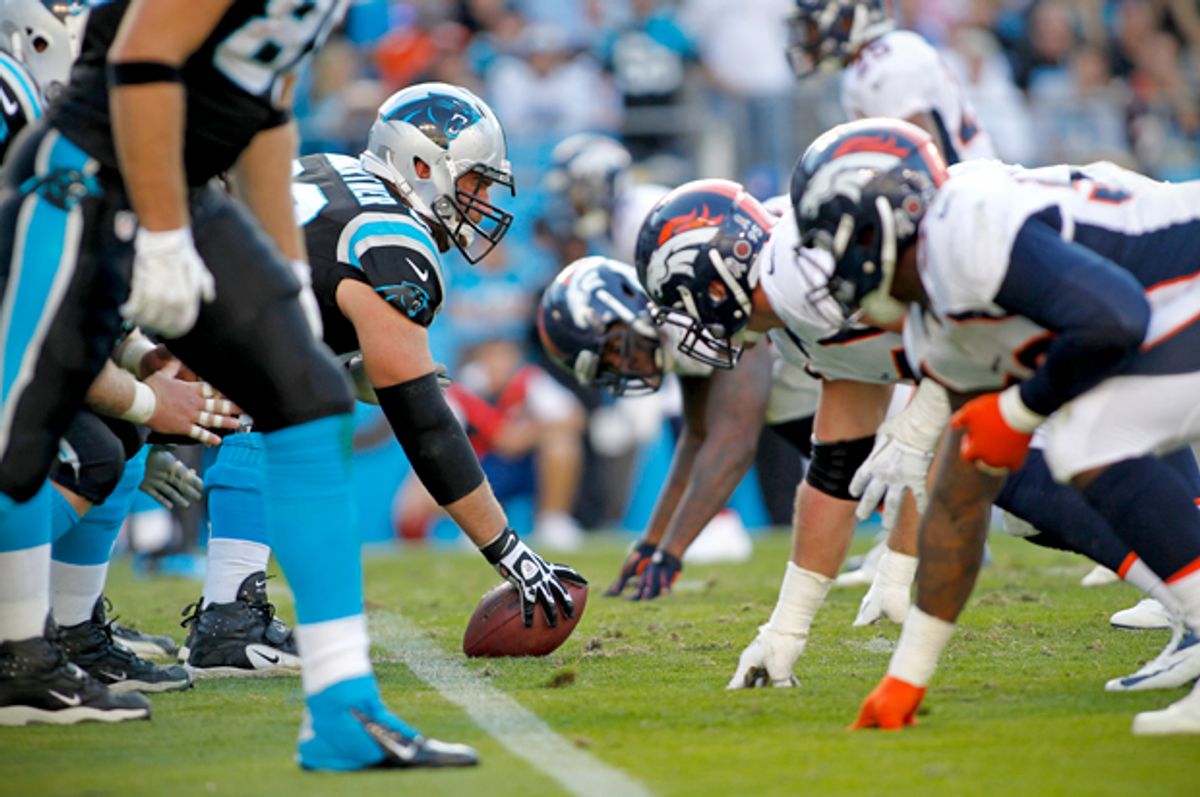 I won’t be watching the Super Bowl on TV this weekend. Or ever again.

Not that I’ve really watched it with any frequency since the 1970s and early ’80s. The past 20 years of Sundays in my life have been given over to driving my kids to swim meets, catching up on the work week’s overflow, going to graduate school, caring for my mother. Before that I spent a decade in France, where you could watch the Super Bowl if you had the Canal+ cable channel, which I didn’t.

As is true for so many people, football was also about my father. Every year he got season tickets. I lived for the Sundays when it was my turn to get in the car after church. We’d ride down Route 65, racing the Ohio, until the city poked up on the horizon. We’d descend the curving exit ramp into dingy sidestreets and park in some desolate unofficial-seeming lot, and as we walked toward the distant dun-colored drum of Three Rivers Stadium, the neon Clark bar floating above the rooftops to the left and the Alcoa sign blinking on the mountainside to the right, we’d find ourselves in a current of people walking in the same direction, amassing, sharing the same quiet purpose and simmering excitement. Careful to keep pace during that long cold march, I’d follow my father up the ramps that ringed the stadium and then down a few steps to the hard orange plastic of our seats, where my feet would freeze before the second quarter. Too proud to complain, I would take an extra-long time to pee in the restroom, which may or may not have been heated but which was, unlike our seats, closed to the bitter wind. Football was this, and it was the watery hot chocolates I solemnly carried back to my father from the concession stand, and it was the millworkers around us bulky in their coats, eating soft pretzels striped with Heinz mustard. I can still see the yellow tongue of the man sitting next to me as he roared, Go, Steelers!

That pride felt personal — probably to all of us there. We had a relationship with those men on the field, or it felt like we did. At 13 I didn’t love the players for the technical merits of their game, or solely because they delighted us by winning so often. They were more like uncles I wished I had: exotic, dazzling, yet somehow familiar. Maybe they seemed familiar because when my mother made lasagna she used Franco Harris’s very own recipe, clipped from the local newspaper. Or because Terry Bradshaw’s baldness pattern reminded me of my dad’s without my knowing it. Or because I was in possession of what I thought were intimate bits of knowledge, like the fact that Rocky Bleier had only half a foot, and Lynn Swann took ballet, and Frenchy Fuqua had goldfish swimming in the Lucite heels of his platform shoes. These men were specific and real, and they were our gods.

In the early 2000s, in the medical school magazine I edited, I planned to publish a profile about a pair of scientists who studied brain injury and recovery. To research the story the writer and I visited their lab, where we saw a little contraption that looked like a telegraph machine but that in fact was used to concuss mice. I worked hard to put that out of my mind and focus on their work. A few years later I ran a story about a lacrosse-playing scientist who studies concussion. His recommendations to the NCAA had already helped ban aluminum bats due to the danger they posed to baseball players, and now he was putting sensors in football helmets to measure head impacts. To illustrate the limits of how little protection a helmet actually affords, he later likened a football player’s brain to the inside of an egg: “it’s still jiggling around, but you can only protect the shell, not the yolk inside.”

Since then the effects of repeated concussive events on the brain, like those endured in a game of football, have become public knowledge, thanks to articles in scientific journals and mainstream media, not to mention books, TV specials, a feature film and the promising young linebacker who famously left the game not long ago explicitly for safety reasons. Public knowledge, despite the NFL’s ugly campaign to discredit the pathologist who believed he was helping when he discovered chronic traumatic encephalopathy, or CTE, more than a decade ago, and the League’s big-tobacco-like attempts to quash or contradict the science since then. CTE was first discovered in the brain of a Steeler -- good old Mike Webster, from the Steel Curtain days, dead at 50.

The fact that the giant football machine grinds on despite the known risks to players’ sanity and lifespans can be explained by many things, the top two surely being love of the game and money. When did it go from being a sport to being a $10 billion corporatized entertainment industry? Perhaps I’m naïve, and football was always about greed. Still, the level of venality and greed and cynicism required to perpetuate a business that depends on millions of people watching young men shorten their lives is breathtaking. (So is NFL commissioner Roger Goodell’s $44 million salary.) Professional football, in Steve Almond’s words, is “capitalism on steroids.”

A third reason must be willful ignorance. I’m guilty. For a long time I filed away the information at hand so I could keep enjoying the occasional game. Because I loved football. I loved that thrilling moment when a fullback disappears into a swarm of defensive linemen and then suddenly bursts free on the other side, or when a long-legged wide receiver runs down the field and suddenly turns, reaches his arms up as in some holy supplication, plucks the arcing ball right out of the air and carries it across the goal line. Recently, I was sitting at the bar of the Chili’s in the Southwest terminal of the Tampa airport during a long layover. The place was crowded, every seat taken. There were television screens all around us. Every single one was tuned to the game, and every single face was tilted upward, watching. I saw an interception reflected in the glasses of the man across from me. Faithful to my vow, I didn’t look at the TV, but it was the sound that got me -- the roar of the crowd and the voice of the announcer, sounds as familiar to me as my best and most deeply embedded memories. Sounds that made me happy.

I hadn’t wanted to lose that. I hadn’t allowed myself to sit with the truth, to apprehend the ugliness of the business. But once you see something for what it is, you can’t unsee it. And I can’t ignore it anymore. Now the cheers of spectators, rising from their seats in ecstatic levitation over a completed pass on a third down, sound to me like blood thirst.

And there’s the rest of it, too, the ignoble aura that hovers over professional football like flies over meat: the preening machismo, the reports of sexual assault and domestic abuse, the salaries that are an insult to any working person, the new stadiums that are an insult to anyone without a decent local public school, the embarrassingly regressive cheerleaders, the creepy racial dynamic of white “owners” sending mostly black men, their bodies hormonally engineered to inflict maximum damage, onto the field like gladiators. Was it always like this? Why are we comfortable watching men harm each other (and looking away when they harm women)?

Nostalgia is powerful voodoo. It can make you keep things -- letters, ticket stubs, a dining room table -- you have no room or use for. It can draw you back to a particular place time and time again. It can dress an ugly truth in the pretty clothes of willful ignorance, or in the black-and-gold uniform that still stops your heart and sends you hurtling back to cool fall days in the field next door and cold winter Sundays at the stadium, when you knew so little of the world as to still feel at home in it.

Maybe part of getting old is letting go, resigning yourself to loss. Loss of illusion. Loss of that time in your life when you didn’t know better and perhaps didn’t need to, when you and your father hadn’t yet drifted apart, when the most important thing was playing with the boys and you could count on your dad telling you to go out for a pass -- Go long! Go long! -- and you did, you went long and made the catch, and you cradled the ball that had just thunked itself perfectly and painfully against your solar plexus, and you dodged the older boys who grabbed at your elbows and ankles, and you felt the rapture of that glorious euphoric run all the way to the end zone, your skin hot and cold at the same time, that long movie moment when everyone was behind you and only field and trees before you and you were smiling wide at the world.