This is the end of marriage, capitalism and God. Finally!

My fellow boomers might mock millennials, but what if the new generation has the big questions absolutely right? 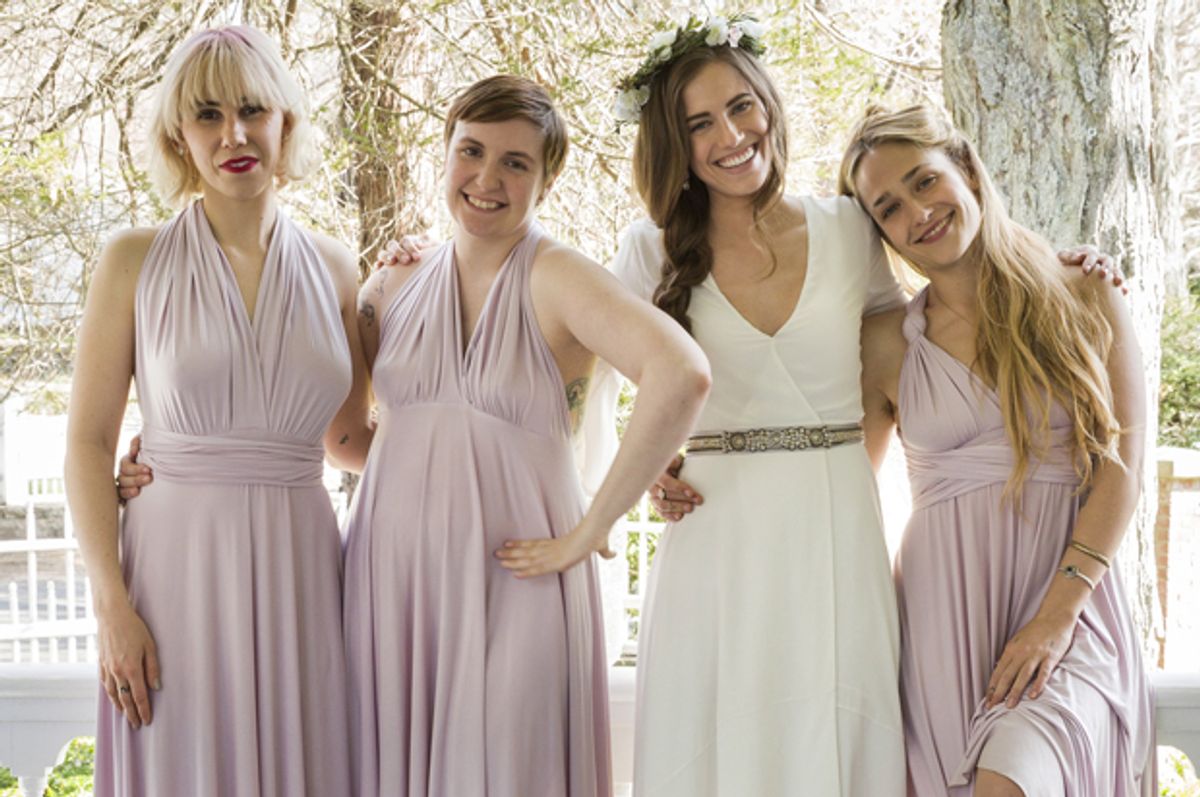 The next big thing isn’t a clever gadget or miracle drug—it’s a way of life: not a breakthrough invention but a social innovation. And it’s not so much a beginning as it as a series of endings.

Rising numbers of young people are now deciding to do everything their parents didn’t. They’re eschewing cultural and economic convention to challenge what we take to be civil society. They aren't marrying. They’ve become the refuseniks of our competitive corporate culture. And many of them have opted out of organized religion.

Let’s start with a quick look at some facts:

The End of Marriage

According to the New York Times, over half of all American women under 30 who give birth are unmarried. When adjusted for levels of education and economics, the numbers skew dramatically higher.

Of course there are an array of possible causes for this trend, including everything from the relative economic independence of educated women to a shift away from the cultural stigma of unwed parentage to even a latent reaction to the divorce of their own parents. This change brings a complex array of challenges. For example, marriage is a foundational element of our legal system connected to property, beneficiary and custodial rights and obligations. Some believe that the decline of matrimony has led to the increase of children living under the poverty level. These skeptics say that if we pull the thread of marriage from the fabric of our society, it is unclear what will unravel or remain intact. While societal norms may have changed, adjusting our legal system to protect unwed mothers and their children may still be far behind.

But the end of marriage may also be a sign of something great: just look at the Scandinavian countries, which rank among the highest educated in the world with a standard of living positioned well atop of our own, and you’ll see the same downward trend for marriage among the young. Their society has not collapsed, their children are well attended, and by, most discernible standards, they are prospering.

The End of Capitalism

Well before the collapse of the middle-class economy in America, Europe and now Asia, young people started cultural movements that shifted the center of balance from economics to social values. According to Pew Research, this change is creating an enormous generation gap between boomers and millennials that is still widening. It’s likely a response to the worst employment prospects for young adults in almost a century—and a renewal of idealistic frontierism, with the New Urban Corridor as the 21st-century Wild West. What were once areas of blight are now shining lights for our youth. Signs of the new anti-commercialism are everywhere: shared houses and cars, urban farm collectives, and the end of intellectual property rights. Millennial survival guides abound in the form of countless blogs that offer advice on how to hack the new world. Pass the beer nuts, comrade.

Time went so as far as to call millennials the "Me Me Me Generation." While tons of readers disapproved of the essay’s snarky tone, what the essay really missed is the collaborative nature of this age group. There is a noticeable shift away from traditional careers in favor of values-centric goals of communal harmony. For example, a much larger percentage of recent college graduates now seek work in the nonprofit sector than graduates in the previous four decades. Many might have attributed this to the dismal job market or the availability of posh parental support, but this global, inclusive view of millennials suggests a real change in attitudes about what constitutes meaningful work.

The End of God

According to the Washington Post, 25 percent of millennials don't affiliate with a faith-based tradition and almost twice as many don't belong to a church. More so, a Pew Research study suggests that an astonishingly low number of youth believe in the existence of a God. As religious participation, affiliation and even belief wane in both post-Christian Europe and the Americas, atheism is now among the fastest-growing affiliations among young adults who have turned anti-faith into its own kind of faith.

What has driven our youth away from their spiritual traditions in record numbers at record speed? A recent report from progressive think tank Center for American Progress suggests a culture gap. The organization characterizes this gap as both a push away from church dogma regarding same-sex marriage and reproductive rights and a pull toward science and personal development. Abuses by clergy and power plays by the bully pulpit may also factor into this divide. Even evangelical magazine Relevant notes that social media-savvy millennials are increasingly rejecting the hierarchy of the church and turning to each other for spiritual solace and advice. Though they may not be attending traditional services, they might well be creating their own personalized spiritual playlist.

This is certainly not the first time we’ve seen this combination of individualism and communitarianism. This was, after all, the basis for American progressivism in the early 20th century. But the institutional constructs that formerly served as bridges for diverse peoples with varied views are now impassable and separate us.

Why is this Happening and What Does it Mean?

Some social theorists suggest that this transition is merely the 21st century version of the same irrational exuberance we saw in the late 1920s and 1960s. They often frame these transitions as the adolescent stage of a grand cycle of divergence and convergence. This explanation implies that we should just let the cycle run its course and things will return to normal. In reality, though, boundless connectivity has changed the way we integrate our lived experiences with our interpretation of those experiences and has created a new type of normal. With all these connective technologies—from smartphones to social media to translational technologies—we’re getting get a wider view, but that view is through a smaller lens.

The peer-to-peer nature of contemporary communication appears to be horizontal, democratic and inclusive, yet all of these smaller communities also result in exclusion—an exclusion from broader forms of sense-making. In other words, we have all of these micro-segments and there is little consensus: there is no grand worldview that we all share. Rather, there are personalized worldviews.

Max Weber, a founder of the field of sociology, anticipated this situation over a hundred years ago when he suggested that the disintegration of socially ascribed roles would lead to the decline of integrating institutions and the rise of extreme individualism. This would create a polemic of horizontal pluralism: the absence of a unifying perspective to integrate values except for a nominal all-encompassing view. Weber’s vision for the future is not so far off from today’s reality. Without marriage, capitalism and God providing a nexus to integrate our common experience and interpretation, we lack a common identity or sense of purpose. We has become a collective Me.

Is This the End of Marriage, Capitalism, and God?

Yes and no. Yes, because more and more people are not only opting out of these institutions—they’re actively positioning themselves against them. No, because, no matter how many alternatives arise, there will always be a need for stable family units, meritocracy, and a belief in something more than the Self.

In place of the collective sense of destiny that bound mid- and late-20th-century Americans together are individualized acts of compassion and self-actualization. Rather than furthering a greater good like curing a disease or putting a man on the moon, millennials are furthering a greater personal good. This isn’t to say that young people are selfish. In fact, the opposite is true. Organizations like Habitat for Humanity and Teach for America give people the chance to help others and cultivate themselves in the process: It’s a powerful combination of altruism and personal development. Our pieces are now our wholeness. In the face of the fragmentation everywhere, our next generations of creators and thinkers are finding themselves and inspiring other people to do so around them.

Marriage, capitalism and God will persist, but they’ll reappear in new guises: grand forces on a more personalized, intimate scale. The key concept here is hybridity, mixtures of old institutions and innovative values: marriages with more flexibility and wider definitions, economic systems that defy categorization like microfinancing and bitcoins, and religions that are mash-ups of ancient traditions and 21st-century personal development practices from spiritual yoga to psychotherapy to eco-goddess worship.

In reality, though, we can only speculate so much. The truth is that we’re moving into unchartered territory, and we need to become OK with that. We all want to see the future—it’s in our nature—but we simply can’t: The fundamental difficulty of innovation is that we have no data on what’s to come. It’s a perennial frustration, yet it’s also a source of vast possibility. We need to let go of traditional structures and allow for boundaries to loosen up and break down. A married Catholic capitalist, I may seem like the quintessence of the Old Guard. But with my judgment suspended and my mind opened, I’m not just ready for everything I know to be dismantled—I’m excited for it. And you should be, too.

Jeff DeGraff is the Dean of Innovation: professor, bestselling author, international speaker and advisor to hundreds of the top organizations in the world. Jeff leads the groundbreaking University of Michigan Certified Professional Innovator Certificate Program and the Innovatrium Institute for Innovation. Download Jeff’s 7 Deadly Sins of Innovation eBook and connect with him on Twitter @JeffDeGraff. www.jeffdegraff.com.