Flint's structural racism: This is why providing poisoned water to the city's citizens seemed like a reasonable idea

Racism's skeptics will continue to deny the effects of racism in Flint. But it's imperative we confront it 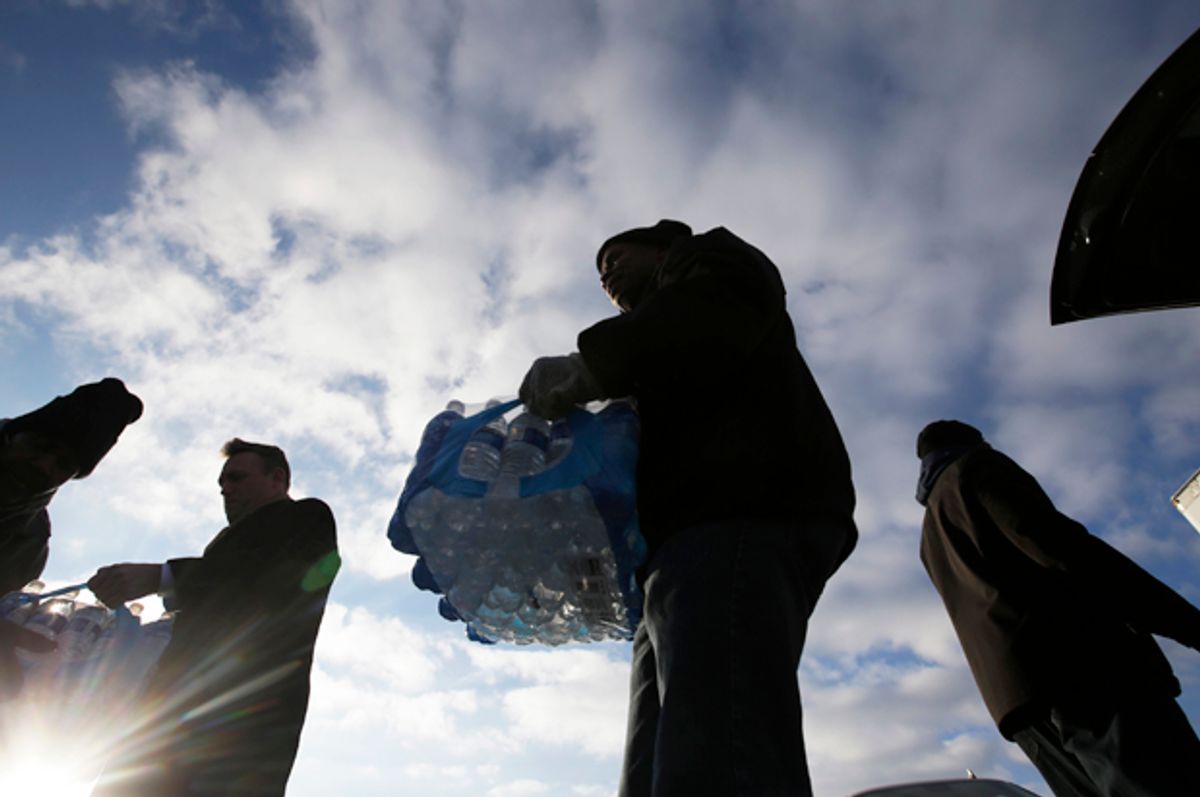 The ongoing water crisis in Flint, Michigan, illustrates both how deeply racism has affected the social fabric, and why it’s so difficult to talk about racism in modern America. On one hand, the statistics show an environmental catastrophe that is unambiguously borne disproportionately by black Americans. The municipal water in Flint, a city that is majority black, is stunningly polluted. Besides the fecal bacteria, discoloration and corrosive chemicals in Flint’s water, some homes have recorded lead levels of 13,200 parts per billion, almost 1,000 times higher than those that would ordinarily trigger federal environmental action. Thus, residents have to contend not only with immediate problems like rashes, hair loss and waterborne illnesses, but also long-term effects of lead poisoning, including delayed cognitive development and mood disorders. As groups and advocates from the NAACP, Black Lives Matter and Michael Moore have pointed out, it is difficult to imagine this happening in a majority white, wealthier city.

On the other hand, there are elements of the crisis that challenge the narrative that this was a crisis perpetuated (deliberately or not) by racist individuals against a minority population. None of the emails released by Gov. Rick Snyder illustrating the political decisions that led to the Flint water crisis mention race, and there is no evidence that Snyder was motivated by racial animus. Indeed, Gov. Snyder has poured tens of millions of dollars into majority-black Detroit to help schools and stave off bankruptcy, and has expanded Medicaid access in a move that primarily benefits lower-income, disproportionately black, citizens. Further, while the water ailments in Flint are borne largely by black Americans, they are not borne exclusively by blacks. Everyone who has drank from or used Flint’s water has been exposed to lead, bacteria and industrial chemicals, including the approximately 38,000 white residents. The emergency manager in charge of running Flint when the state government switched the water source to the Flint River, Darnell Earley, is black.

At first glance then, those who are skeptical of the effect of racism on America’s political economy would contend that, while tragic, the poisoning of Flint’s water was hardly racist. Indeed, the primary explanation for Flint’s woes is not racial, but economic; the near-total withdrawal of federal support for water services in the years after the 1972 Clean Water Act combined with an ailing infrastructure and a declining tax base in Flint meant that the city and state were strapped for cash. In an effort to cut corners, the state had “no choice” but to abandon any renovations of the dilapidated water infrastructure, and use the cheapest source of water available, despite persistent questions about its suitability. Of course, it is not entirely clear that “because they are poor” is an acceptable reason to expose people to a poisoned water source. Nevertheless, despite Moore’s claims of “racial killing,” or political cartoons by Wuerker that invoke Jim Crow era segregation of water coolers, the decision to expose people to toxic water in Flint was not made through an explicit racial calculus.

However, we cannot meaningfully discuss what is happening with water in Flint without discussing racism. Simply put, the economic situation in Flint and the logic that made providing poisoned water seem like a reasonable idea would not have occurred without racism. Of the racist practices that have contributed to the current crisis, perhaps best documented are those of the Federal Housing Administration (FHA), which, in the 1930s, began underwriting residential developments across America. This federal agency had through the 1960s an explicit mandate to deny or limit financial services in Michigan and elsewhere “based on racial or ethnic composition without regard to the residents’ qualifications or creditworthiness.” In other words, otherwise qualified black and minority households were denied access to economic mobility solely on the basis of their race. Further, even white residents could be denied FHA services if they lived too near to “inharmonious racial or nationality groups.” This clearly race-based program 1) made it far easier for whites to get access to improved housing, and 2) incentivized white residents to self-segregate, since white people in integrated neighborhoods would be punished economically just as much as their black neighbors. Of course, this federally institutionalized practice known as “redlining” was joined by other state-level and private-actor discriminatory practices that undermined the economic health of black and minority populations.

Thus, even after the passage of the various civil rights acts of the 1960s, and the end of explicitly racist policies, black economic power and the black tax base remained enervated due to decades of disenfranchisement. Cities and towns like Flint and Detroit became majority black, and increasingly relatively poor, as wealthier white residents left in droves, subsidized in part by government-backed programs. Worse, the Reaganite state and federal economic policies started in the 1980s, such as the retrenchment of social services, deregulation of industry, and shrinking funding for municipal infrastructure may have been ostensibly race-blind, but their impacts were anything but. Since decades of deliberate racism functioned to keep blacks poorer and concentrated in the funding-starved inner cities, the effects of these later policies – even without mentioning race – had clear racial impacts. Majority black, majority urban areas lost jobs, social safety nets and, because of gerrymandering and high rates of incarceration, voting and political power. Even without deliberate racism, the American political economy was informed by structural racism.

With the political and economic disenfranchisement of a people comes environmental vulnerability. As early as the 1980s, studies by the United Church of Christ on toxic waste production and siting in America have documented how these socioeconomically and racially marginalized communities have become the repositories of America’s pollution. In much the same way that the Flint River became a sink for industrial runoff and sewage, black and inner-city communities in places like Warren County became the places to build toxic waste disposal sites and incinerators. That these communities were chosen to be made more vulnerable to air and water pollution was no accident – being disenfranchised, their objections to being poisoned were far less politically salient to policymakers than the objections of wealthier, whiter communities. As I have argued above, this disenfranchisement is a direct product of the racist logic of the modern American economy. Indeed, as communities from Warren County through the current BLM movement in Flint have attested, the modern civil rights struggle is environmental, as much as it is about policing or economic opportunities.

Of course, the fact we cannot show deliberately racist decision-making to explain Flint means that racism’s skeptics, of which Gov. Snyder is one, will continue to deny the clear effects of structural racism in Flint and other cities. It is imperative that we confront this racism, however. As Flint shows, structural racism can lead to “social murder,” where even without clear homicidal intent, the incentives in a social system lead to increased mortality and vulnerability in targeted populations. In thinking about the long-term effects of lead poisoning on children, we should worry about the educational and employment opportunities of the Flint residents. Those challenges will inevitably harm long-term prospects of social mobility, in turn subjecting the citizens to greater social as well as environmental vulnerability.

Finally, even for those of us who are not residents of Flint, the structural racism visible that led to Flint’s crisis is a concern for all. Aside from the general humanitarian concerns we should feel for a vulnerable population, the poisoning of Flint’s water is a dire warning of how political and economic racism can undermine environmental sustainability writ large. While the American political economy has done pretty well so far at externalizing environmental costs to the poor and marginalized, environmental hazards do travel, perhaps more easily than poor black citizens. In the same way that racist and authoritarian police practices have killed Eric Garner, Jack Crawford and Kelly Thomas, the environmental vulnerability that has devastated Flint – rotting infrastructure, industrial pollution, intransigent political institutions – puts us all at risk.