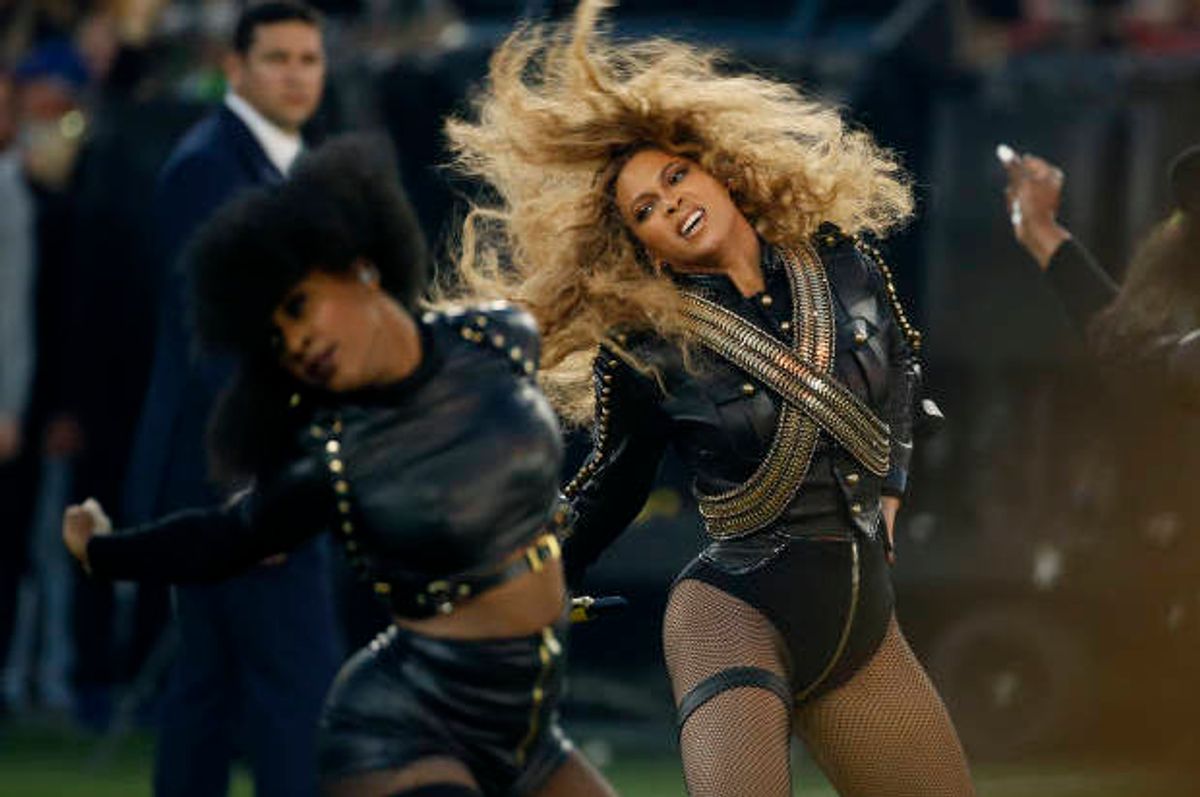 If football is a religion in America then the Super Bowl is its most holy holiday. As such, the Super Bowl is a spectacular projection of American values—crass consumerism, empty nationalism, militarism, cartoonish masculinity and violence.

And, of course, the color line penetrates and hovers over American life, culture and politics too.

Its shadow was heavy over Super Bowl 50.

Cam Newton is one of only six black quarterbacks to play in a Super Bowl. His type of confident black masculinity has been the object of scorn and criticism. Cam Newton also performs a black, Atlanta-originated dance called the “dab” when he scores a touchdown.

Some in the sports media and elsewhere have decried him as not being a proper “role model.”

This is hypocritical. White athletes are allowed to show joy and confidence without fear of condemnation. By comparison, the black body is always a threat in America. It has to be disciplined, controlled and regimented. Transgressions of those norms are punished and condemned. This is true from before the Founding through to the post civil rights era and the Age of Obama.

Beyoncé performed her new song “Formation” during the Super Bowl 50 halftime show. “Formation” is an unapologetically “black” (female) anthem of resistance with its imagery of the destruction wrought by Hurricane Katrina, allusions to white-on-black police violence, support for Black Lives Matter, and celebration of black style, fashion, love and speech. There is no code switching in “Formation”; it does not cater to or comfort the White Gaze.

Beyoncé’s new song may not be a form of “high” or “formal politics.” Nevertheless, its celebration of black folks’ humanity is a resistant and oppositional act. This is especially true in an American society where a basic claim that “black lives matter” is viewed by many whites as controversial, provocative and offensive.

Capitalism and race intersected at Super Bowl 50 as well. The dream merchants are adept at manipulating the forces of “racial capitalism” and “neoliberal multiculturalism” to advance the bottom line of corporate profit by manipulating the desires of consumers.

Ultimately, “black culture” is a commodity. It is used to sell products even while actual black people are often either not present or are depicted in stereotypical ways by advertising and commercials.

To wit. Toyota’s Super Bowl 50 commercial for its line of Prius automobiles managed to appropriate black music and culture while erasing black people from its main narrative frame.

Hip-hop culture “crossed over” from a black and brown subculture birthed in the dystopian deindustrialized neighborhoods of New York in the 1970s to become one of the world’s most dominant types of music and aesthetic. One can debate if this is a positive or negative outcome. The reality of hip-hop as a dominant global culture and commercial product is indisputable.

As further proof of hip-hop music’s global dominance, Toyota’s Prius commercial featured the classic hip-hop “b-boy” anthem “Apache” by the Incredible Bongo Band as one its featured songs. Apache is an example of the obscure music that hip-hop DJs in New York repurposed and remixed in (what was then) a dynamic and organic subculture during the 1970s and early 1980s. “Apache,” along with songs such as “Hihache,” “Funky Drummer,” “Scorpio,” “The Champ,” “The Mexican,” “Seven Minutes of Funk,” “Mardi Gras Drummer” and others were the basis of a music and cultural tradition in which young people in New York’s ghetto communities sought pleasure and hope in the face of State-sponsored neglect and violence.

Toyota’s Super Bowl 50 Prius commercial is an ironic (and unintended) reminder of how black and brown people are still treated unfairly by American’s police. In the ad, four white men who have robbed a bank successfully flee the police using their near silent electric Prius. These white men were not shot and killed by a fusillade of bullets. This outcome is predictable: they are the protagonists/heroes of the advertisement. Moreover, the success of these white thieves is intended as wish fulfillment for an audience that Toyota hopes will then buy a Prius.

However, advertisements (like film, TV shows, and other types of cultural objects) are not politically or ideologically “neutral.” As a type of popular culture, they reflect the cultural norms and values of a given society. In turn, members of those societies interpret, process, and “read” those images and narratives based on their own personal experiences, as well as understandings of the social and political world.

On social media such as Twitter and elsewhere, Toyota’s “fun” Prius Super Bowl 50 commercial was seen by many people as a reminder of white privilege and how the video recorded murders of black people by police are a type of lynching photography for the digital age.

Speaking to this point, some of the responses on Twitter included:

Toyota wanted to appropriate hip-hop culture to sell electric cars to the millions of people watching Super Bowl 50. Instead, Toyota’s Prius ad reminded black folks--those of us who are 21 times more likely to be killed by America’s police than are whites; terrorized by a racist and classist carceral society; harassed and killed by white vigilantes empowered under “stand your ground laws”; and live in a United States where 12-year-old black children are de facto executed by cops who suffer no negative consequences for committing “legal” murder--of our vulnerability.

White supremacy is not excluded from the capitalist marketplace. For what philosopher David Theo Goldberg has insightfully termed “the racial state,” capitalism, the color line, and the dreams and desires cultivated by advertising are all intimately connected. Because of that dynamic, the same experience will bring some individuals and groups joy and pleasure while others are reminded of their stigma and marginalization.

Fantasies of consumerist consumption, luxury and excess exist along the contours of the color line and not separate or apart from them. The realities of race, class, gender, sexuality, and other social cleavages are omnipresent in sports. Super Bowl 50 just magnified the best and worst of America’s values, traditions and cultural norms and then presented them on a grand and spectacular stage for all to see.