With "Formation"'s surprise release, Beyoncé became the halftime star, MVP and winning commercial all in one 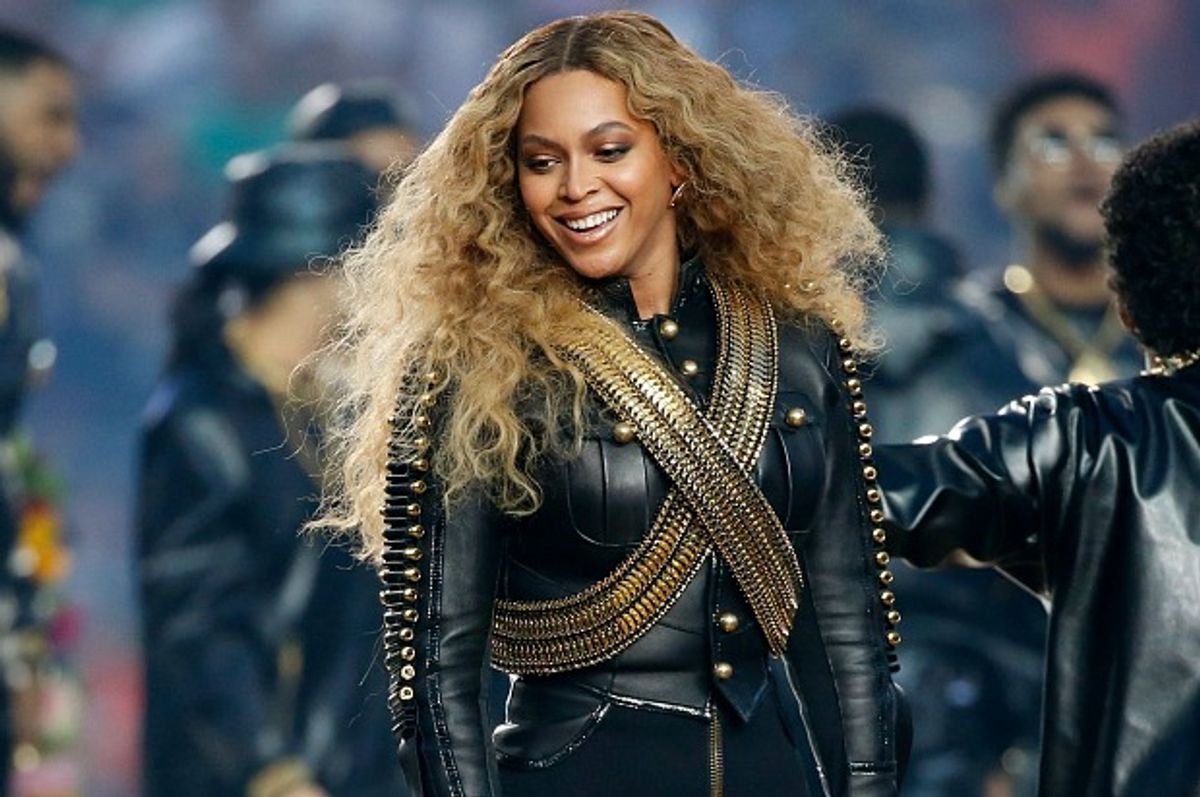 As far as marketing campaigns go, it was tremendous. The video dropped Saturday, and by the time the Super Bowl came around, everyone already knew they were going to see a version of the already viral sensation. It was followed, immediately, with a plug for an upcoming product, which will have a robust presale followed by general sales. And this all fell into place with effortless precision; the company’s Instagram account had a series of caption-less photos lined up to commemorate the occasion, and not a peep of gossip, rumor, or leaked footage ruined the surprise.

I am not talking about one of the companies that spent $5 million for a 30-second spot at the Super Bowl, on top of untold costs to get their ads actually made—whether that means paying Christopher Walken to shill for Kia or a crane operator to make Jeff Goldblum float up 40 stories while playing a grand piano. Nor am I talking about the NFL, which did a pretty terrible job representing itself over the course of the four-hour broadcast—with the combination of a boring game, a creepy advertising campaign, and referees that appeared to not know how to do their job. No, this coordinated product launch is well out of their reach. I’m talking about the queen of product launches, the singular disruptor of the music industry, and one of the most important political figures in America: Beyoncé.

The foremost indicator of Bey’s inherently regal nature is that nuance and objectivity tend to fly right out the window when discussing her. Whole publications endorse her with a blasé enthusiasm that they would not reserve for a politician, a sports figure, or even a single brand of eyeliner. Beyoncé implicitly demands worshipping, and worshipping is what she gets. The secondary indicator, of course, is the product. On Saturday, Beyoncé dropped a fully produced song paired with one of the most brilliant and astonishing music videos in history—“Formation,” a track that defies easy explanation. The New York Times immediately produced a thinkpiece on the topic, that’s how important it was. In it, critics Jon Caramanica, Wesley Morris, and Jenna Wortham dissect the video, which functions on both a broad level and a nuanced one; it’s both an incredibly catchy number and an expression of identity, indignation and history that is so potent it is breathtaking. Much like “Formation”’s weekend-long rollout, no frame in the track’s video happens by chance. The “formation” of the title speaks to the black tradition of excellence in marching bands, the arrangement of Bey’s “ladies” around her in the song’s anthemic lyrics, and most wrenchingly, the posture of steadfast readiness maintained by civil rights protestors.

That was phase one. In Santa Clara, California last night, Beyoncé performed phase two: a live rendition of “Formation,” just a single day after it had first been released, as a guest on Coldplay’s Pepsi Halftime Show. Just as with the video, every inch of the “Formation” live performance was executed with elaborate care: Bey’s leotard was an homage to Michael Jackson’s outfit at Super Bowl XXVII, in 1993; her backup dancers were wearing Black Panther berets and threw up a Black Panther solidarity fist in the middle of the floor choreography; her accompanying marching band was all-black and all-female; and after strutting on stage to have a friendly dance-battle with Bruno Mars, between her “Crazy In Love” and his “Uptown Funk,” she gently ushered Coldplay’s Chris Martin back into her royal presence, and then pushed the camera sideways to focus on the screaming fans, because Beyoncé controls when and how her audience sees her.

I don’t mean to diminish Beyoncé at all when I say that her work this weekend has been a masterclass in salesmanship; it’s not just how coordinated the elements were, but it’s what Bey was selling, too. With the Flint water crisis stretching on unabated and senseless shooting of black men a continued fixture of life in America, there is plenty to be angry about; Beyoncé chose almost the exact right moment for “Formation,” which serves as both a shout of frustration and a rallying cry. The national dialogue around race relations between black people and the white establishment has never been more fruitful and nuanced; Beyoncé, by stepping into this moment, has instantly defined it. The artist is so perfectionist—and so silent, in the media, outside of her work product—that everything she does carries with it the weight of enormous expectation; she doesn’t do anything idly. And “Formation,” for Beyoncé, appears to be the beginning of a crusade for the lives of black people in America, including her own daughter, Blue Ivy. Beyoncé is also starting a fund for the residents of Flint, Michigan. Headlines covering her work this weekend are hilariously jam-packed; Bey’s plan fell into place like so many dominoes.

Which is why perhaps the only public relations hiccup marring Beyoncé’s perfect “Formation” rollout is her appearance in Coldplay’s latest video “Hymn For The Weekend,” which was shot in India during the festival of Holi. Chris Martin and the other members of Coldplay are essentially themselves in the video—white dudes discovering India for the first time, as white dudes have done since the time of Marco Polo. Beyoncé plays an apparently Indian actress/singer, wearing some approximation of Indian clothes and doing an approximation of Indian dancing, and it’s so, so wrong. There’s an argument to be made about the video’s inclusion of the community it was filmed in, just as there is an argument to be made for the video’s inherent Orientalism. But to me personally, as an Indian-American, this debate is secondary to Beyoncé’s role in the video; I don’t expect Coldplay to get what it is to be a woman of color in a marginalized place in society, but I do expect, and hope, and believe, that Beyoncé would. “Formation” is an example of Beyoncé understanding of exactly how black women are simultaneously pigeonholed and powerful in American culture; she finds dozens of ways of adroitly turning the modes of oppression back on the oppressors. It’s devastating that she can’t see the same perspective for Indian women, especially in a video that appears to have given Coldplay free license to decorate their Super Bowl set with Indian-esque flourishes of color and flowers and drench the stadium in rainbows, as if in addition to having just discovered India, they also just discovered the spirit of the ‘60s. Indeed: From a purely marketing standpoint, her role in “Hymn For The Weekend” is strangely unmanaged, quite the opposite of the way she is so careful with her portrayal in “Formation.” Coldplay’s vision for “Hymn For The Weekend” is pretty, but ultimately incredibly bland. And as a result, Beyoncé, devoid of her own vision, shines so much less brightly.

It takes a lot of skill to wield politics, identity, and artistry all at once. In “Hymn For The Weekend,” maybe for the first time in my memory, Beyoncé isn’t the titan of integrity and consideration that I have otherwise found her to be. To cope, I have entertained myself with some hypotheses. It is highly unlikely that Beyoncé had any notion of Coldplay’s music-video vision before recording “Hymn For The Weekend.” Apparently she did not go to India to film, so everything in the video is happening on a soundstage somewhere. And perhaps Beyoncé and Coldplay did not perform “Hymn For The Weekend” for some other reason besides Martin’s excuse in a press conference this weekend—which argued that the pair would not be performing the song because it “only just came out.” (I mean, tell that to “Formation.” I don’t know what discussions happened behind the scenes, but while performing, Martin essentially yielded the stage to her, in what seemed like a necessary and even obvious act of deference.)

For someone who is a master of personal branding and careful vision—who recorded an entire album and videos for each, in secret, and then dropped them all simultaneously in a total inversion of the rest of the music industry—“Formation”’s rollout is a well-oiled machine with a weird sputter right at the beginning. Beyoncé took back the narrative with the Super Bowl, and hopefully, she won’t lose hold of it anytime soon.