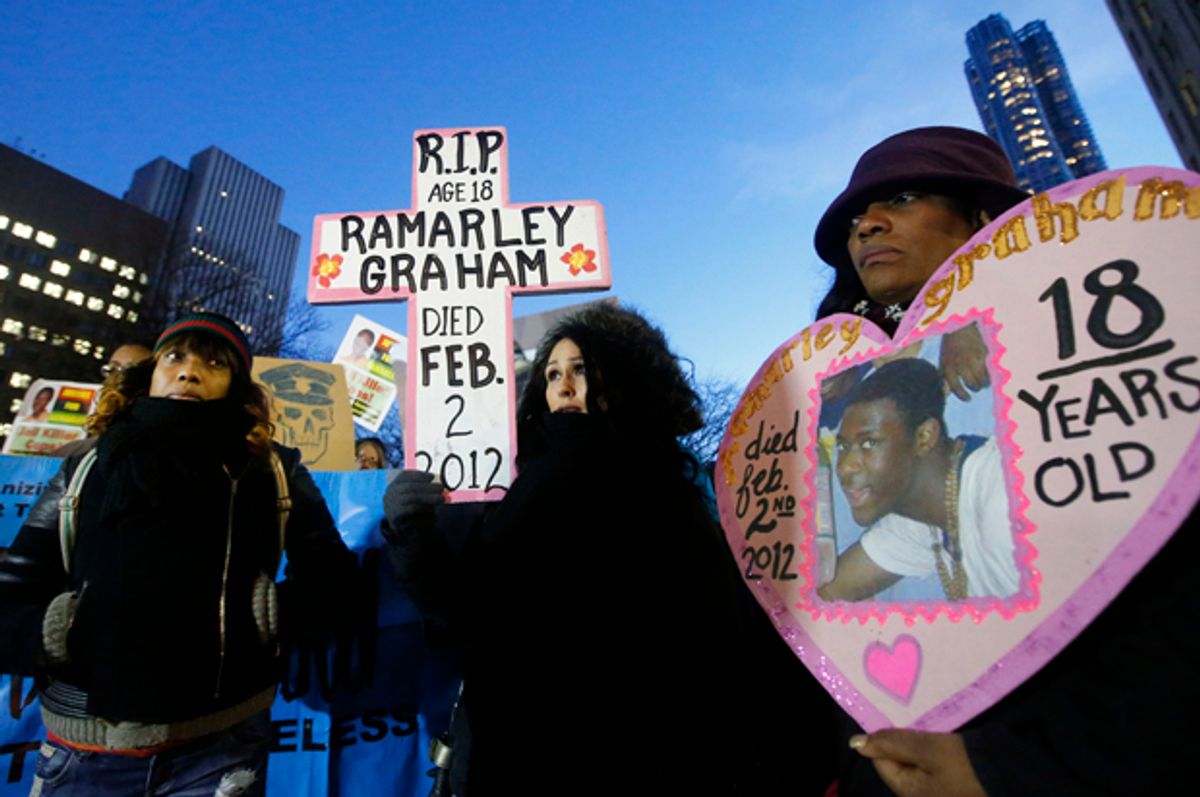 Police followed black teen Ramarley Graham home in the Bronx one afternoon in February 2012. They then broke into his house without a warrant and shot the unarmed 18-year-old point-blank in the chest, killing him.

The young man's grandmother and 7-year-old brother were at home at the time. Graham's grandmother was subsequently taken to the NYPD's 47th precinct and interrogated for seven hours.

Richard Haste, the white police officer who fired the fatal shot, was charged with both first-degree and second-degree manslaughter four months later. Haste was the first NYPD officer to be indicted for a shooting since 2007, when three others were indicted for killing another young black man, 23-year-old Sean Bell, on the eve of his wedding in Queens.

Like the police who shot Bell and his two friends 50 times, Haste was acquitted. A Bronx judge threw out the charges on a technicality.

When Graham left a bodega on Feb. 2 and began walking home, the police officers said they saw him adjusting his waistband in a way that made them think he had a gun. They followed him to his house, claiming they saw a gun on him. Graham was unarmed.

In their official report, the officers also said they had identified themselves as cops and told Graham not to move, but he ran instead. The surveillance footage later revealed that they had lied.

After the cops entered his home without a warrant, Graham ran toward the bathroom, allegedly in order to flush a small bag of marijuana down the toilet. Haste said he thought the unarmed teen was reaching for a gun, and shot him down.

In response to a campaign and petition initiated by Graham's family, the Department of Justice began investigating the case in August 2013. Since then, however, it has made very little progress.

Graham's family held a variety of events last week, including a vigil, a protest at the Department of Justice and a news conference outside City Hall.

Graham's mother, Constance Malcolm, asked protesters to "make your voice be heard because Ramarley could have been your son." She said she wants the DOJ to feel "the pressure that we are not going away."

"We won't stop," Ramarley's father Frank Graham maintained. Graham senior stresses that the NYPD "murdered" his son. Both parents continue to tirelessly fight for justice for their son.

In the meantime, not only has Richard Haste, the  officer who killed Graham, faced no consequences; he also continues to work for the NYPD, and was even recently awarded a raise.

New York City Public Advocate Letitia James, talking to Salon on the anniversary of Graham's death, said the case "serves as yet another reminder of the serious work we need to do to repair the broken trust between the police and the communities of color they are sworn to protect."

"But we must continue to enact meaningful reforms," James added.

She declined to speak specifically about the case, but more generally said she's working to "restore accountability and transparency within our criminal justice system," citing her encouragement of police body cameras.

"We must continue working together to improve technology and training within the NYPD and we need to promote diversity in police leadership," she said.

Others think this is not enough, however. Salon also interviewed Jumaane Williams, a New York City city council member who has been outspoken about Graham's case.

Williams, who has been outspoken about the Graham case, called it a "miscarriage of justice."

Even "worse, they're not even getting a response," he added, referring to Graham's family. "The DOJ can't tell them when they'll finish; they don't even know if civil rights have been violated."

"It's been four years, and I think we're overdue for some answers," he said. Williams said the city should make a deadline on how long it is going wait for the DOJ's investigation, and, if it's not met, it should decide once and for all whether to take action.

"I don't think you can look the video and under the facts of the case and say that everything went the way it's supposed to," Williams said, adding the that does not think the Bronx district attorney handled the case properly.

Surveillance footage shows officers from the NYPD's Street Narcotics Enforcement Unit trying to kick down Graham's door, before entering his home without a warrant and shooting him.

"It's very rare that we have everything on video. Up until Garner, that was the most shocking thing that I had seen — of an officer literally breaking down someone's door to go shoot them, unarmed, in front of their grandmother," Williams noted, referring to the case of Eric Garner, a 43-year-old black father who was standing on the sidewalk in Staten Island in July 2014 when police approached, put him in a chokehold — a maneuver barred by the NYPD — and strangling him to death. Garner, who was asthmatic, cried out "I can’t breathe!" at least 11 times, and the medical examiner ruled his death a homicide.

"But then you saw with the Eric Garner case, where the whole murder was on video, and they got off; nothing happened to them either," Williams added.

"If we want to move forward in the police-community relations discussion, we have to hold police accountable," Williams said, lamenting that there's been no disciplinary action against the officers involved.

He stressed that, for the community, Graham's case only continues to "pour salt in the wounds."