It's possible to say he didn't act wisely or like a pro with the media without a bigger moral judgment. But... 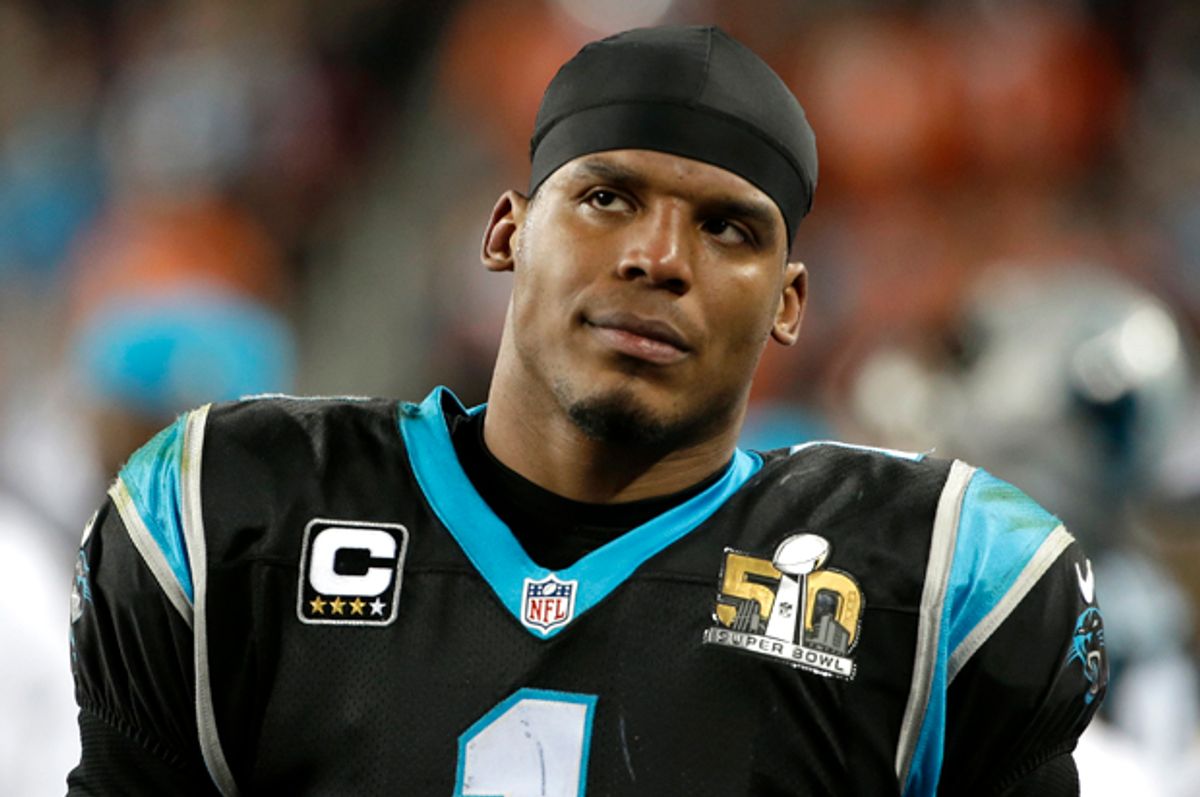 Heading into Super Bowl 50, Cam Newton was the story. Today, Cam Newton is still the story. The Panthers quarterback came in hot, emboldened and eager to take on the burden of transforming his sport. In last night’s game, Newton ran smack-dab into a ferocious Denver Broncos defense and never really got on track. Cam Newton lost. And he certainly didn’t make things any easier for himself.

It’s been obvious all along that a Panthers loss would unleash a wave of pent-up vitriol. Even if Newton had played exceptionally, his critics would have found some leverage. He could have been his usual unimpeachable self on the field and some still would have found ample reason to blame the team’s performance on dabbing or brightly colored pants.

Except Cam Newton didn’t just lose a football game. His play was thoroughly unremarkable, even dismal at times. The Panthers were stifled by Denver and failed to respond or adapt accordingly. Newton made only a handful of big plays and spent most of the game running for his life behind the line of scrimmage. His body language was dismal. He danced out of the way of a late-game fumble that could’ve given the Panthers a shot at a comeback. And when it came time to talk to the media, Newton was brusque and dismissive before walking off abruptly when he overheard Bronco Chris Harris ask, “Can [Cam Newton] throw the football?”

Because Cam Newton is Cam Newton, today’s conversation has been utterly devoid of any nuance or complexity. Nobody’s leaping to his defense as a football player, perhaps because that one play looked so bad and said so much about his mind-set by the end of the game. Instead, this press conference has become as polarizing as the man himself. On one side, you’ve got takedowns casting Newton as a petulant child and a failed role model. On the other, there are Cam apologists who even before the backlash took shape, were minimizing the incident. Talking to the media is trivial, Newton was overcome with emotion, and really, who wouldn’t sulk on the what will probably be the single worst day of his football life?

The difference between today and a week ago, though, is that this time around, there are good reasons to find fault with Cam Newton. There’s also still cause to be protective of him, as some seize on the opportunity to make an example of an athlete who did so much to challenge football’s orthodoxy. Anyone interested in the truth of the matter must acknowledge a series of contradictions: It’s possible to find fault with Cam Newton’s behavior without assigning it any moral value. It’s possible to think (wish, even) that he could have handled himself better while fully acknowledging that Newton knew a media firestorm lay ahead of him. And we can talk about what we’ve learned about Cam Newton as an athlete without indicting him as a human being.

In and of itself, a press conference is a formality, a chance for reporters to harvest boilerplate quotes and maybe revel in a moment or two of candor. It’s far easier to screw one up than it is to keep things lively and interesting, which is why most athletes—even when they’re in a state of post-championship euphoria—opt for platitudes and rigid sports-speak. There’s just very little incentive to go out on a limb but still, superstars have to take the podium. Meaningless though it may be, fielding these questions is a matter of professionalism. It simply comes with the territory.

What Cam Newton chose to do tells us nothing about his character or his influence on the youth of America. We can certainly conclude, though, that the 26-year-old does not deal well with losing, to the point of disconsolation. He doesn’t yet have the composure that we expect—and to be fair, require—of someone in his position. This doesn’t make him a terrible person or a tarnished hero. Cam Newton has simply reminded us that human beings are complicated and that our tendency to paint them with a broad brush often obscures the truth of a situation.

We can now have misgivings about Cam Newton as a football player where we couldn’t before while at the same time pushing back against anyone who would hold him to a different, higher standard or use one press conference as an excuse to trivialize everything Newton has accomplished this season.

Cam Newton is no fool. He knew that, in the wake of defeat, his detractors would come out in full force. There was simply no way that he would get a fair shake from certain members of the assembled media, or sports talk radio, or Twitter. Even if he had come out and been the same charming, self-possessed Cam Newton we saw in his pre-game interview, there still would have been something: A reporter out to spark controversy, some small detail of speech to fixate on, or maybe even accusations that Newton was too graceful in defeat. It’s impossible to say.

What we got instead, though, was the Panthers QB not even deigning to go through the motions. Newton didn’t even try to try; instead of a brave face or a glimmer of the pain he must have been feelings, we got an outright refusal to cooperate. It wasn’t protest, it was proof that Newton’s personality has its flaws and his ego isn’t bulletproof. This makes him human, as opposed to superhuman or subhuman—which, according to the prevailing discourse, are the only two options.

And finally, there’s the overarching fact that our grasp of Cam Newton, football player, is only one facet of Cam Newton, human being. Whatever qualities we want to ascribe to Newton after last night’s game are football qualities, not the sum total of who he is as a person. For many athletes, there’s nothing more to life than sports. And obviously, we can’t pretend that sports gives us zero insight into those athletes who might warrant deeper consideration, or for whom life is not circumscribed by the playing field. The choices made in sports are, if not predictive, at least a helpful metaphor. By that same token, sports can’t be taken as the sole measure of a man and his character—or the effect it will have on others.

For at least the next few days, the story around Cam Newton will be overwrought and strident. Battle lines will be drawn; more than ever, you’re either with Cam or you’re against him. Except the picture has grown considerably murkier over the last 24 hours. It’s not a question of how you feel about Cam Newton but of whether, at a crucial moment in sports and culture, we’re capable of anything other than wholly simplistic thinking.