The lightweight candidate: Rubio's NH town hall left no doubt he's in it for himself and the plutocrats who fund his campaign 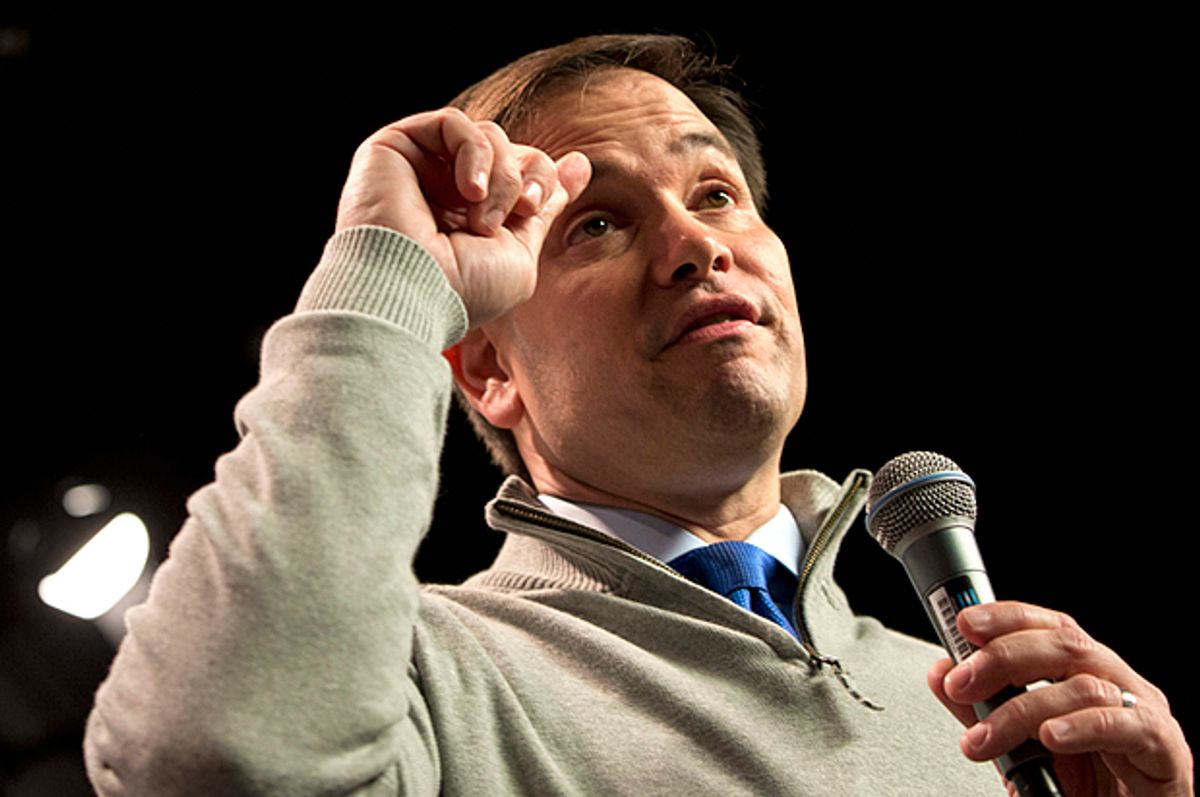 Toward the end of his town hall in a crowded school cafeteria in Hudson, New Hampshire, on Sunday, Marco Rubio said something that summed up the shallowness of his campaign and his character. If you had any doubt that he is in this race for the benefit of anyone other than himself and the plutocrats funding his campaign, this should drive them right out.

To explain, let’s start with the protesters.

Before the event’s start, a group of about 25 protesters had gathered outside the front door of Hills Garrison Elementary School. They were volunteers for the United Auto Workers who had driven up from New York to spend a couple of days bringing their message to New Hampshire. They were protesting not Rubio specifically, but their feeling that there has been too little recognition of what all the GOP candidates’ economic policies will accomplish if implemented. Namely, that the benefits of their tax plans will accrue mostly to upper-income taxpayers through the reduction of rates and elimination of capital gains taxes, while the vast swath of middle- and working-class folks will see their healthcare disappear when a GOP president repeals Obamacare, their Social Security vanish down rat holes labeled “raising the retirement age” and “benefit reductions,” and their wages continue stagnating as the upper class uses its financial and political power to grab more of the pie for itself.

In short, the protesters are there to talk about one of the central themes of this election, that of the effects on society of the vast wealth-inequality gap between the very rich who are funding most of these campaigns, and everyone else.

The group called themselves “superheroes for the super-rich.” To that end, a few of them wore superhero masks – Batman, Spider-Man, Captain America (the DC-Marvel rivalry having been set aside in the fight against inequality). They chanted sarcastic slogans that were the equivalent of a Bronx cheer: “We don’t need no middle class … Marco Rubio’s got our backs!”

So, here was Rubio giving his stump speech inside the cafeteria a little later: “I wanna be a president for all Americans. Batman and Spider-Man out there? I’m going to cut their taxes too!”

The line got a big laugh, because ho ho ho, those silly liberals outside don’t realize that Marco Rubio, in the middle of his ongoing audition to be Sheldon Adelson’s cabana boy, wants to put more money in their pockets by slashing their taxes. And if all his millionaire super PAC donors get more money in their pockets at the same time, well, that’s just as American as apple pie.

To which I feel comfortable saying that the protesters outside would reply, “Piss off.” They were not out there complaining that their taxes are too high. They were upset, in part, because the low taxes paid by Rubio’s backers have helped create an unsustainable inequality gap not seen since the Gilded Age of the 1920s. They were complaining because they have been told for decades that if millionaires get tax cuts, that will somehow unleash the power of the American economy to grow and grow, and everyone will benefit. They have seen that the theory of trickle-down economics Rubio pushes is a load of hot garbage, that he is selling snake oil, and they aren’t getting suckered into buying it.

Let us try to imagine a politician who might have at the very least sent a staff member out to the protesters to find out what they were upset about and come back and briefed him before he engaged in this insulting round of hippie-punching. That politician would be a much better choice for president than Marco Rubio.

The irony is that Rubio in person is better than the Rubio I had seen in the GOP debate the night before, and in every other debate and Fox News interview. He might still be spouting memorized talking points, but he comes off as more natural in front of a crowd. He even manages to make his laugh lines sound spontaneous. He’s not a bad candidate as long as you don’t pay close attention to the actual content of the policies he advocates.

In fact, his team must be feverishly hoping that the electorate is so distracted by Donald Trump and Ted Cruz that it won’t listen too closely to Rubio, who can sound just as unhinged and ridiculous as those two sociopaths. In Hudson, he promises that on day one of his presidency, he’ll tear up the deal with Iran and repeal “every single one of Obama’s unconstitutional executive orders.” He’ll rebuild the military, which has shrunk to unacceptable levels, and size matters to Marco Rubio. He’ll send every suspected terrorist he can get his hands on right to Guantánamo, legal niceties be damned. He’ll secure the border and deport all the violent criminals who are here illegally.

Basically, Rubio comes off like a mashup of Greg Stillson and a particularly frenetic labradoodle. Kind of butch, kind of nuts and really, really hoping you like him.

And conventional wisdom has it that he’s the best hope the GOP has to win the general election, if it can only get him through the primaries without the public noticing that he’s such a lightweight, CBS could have strapped a camera to him and floated him over the Super Bowl on Sunday night. Which would be a much better use of him than as another ring in the circus that is this primary season.