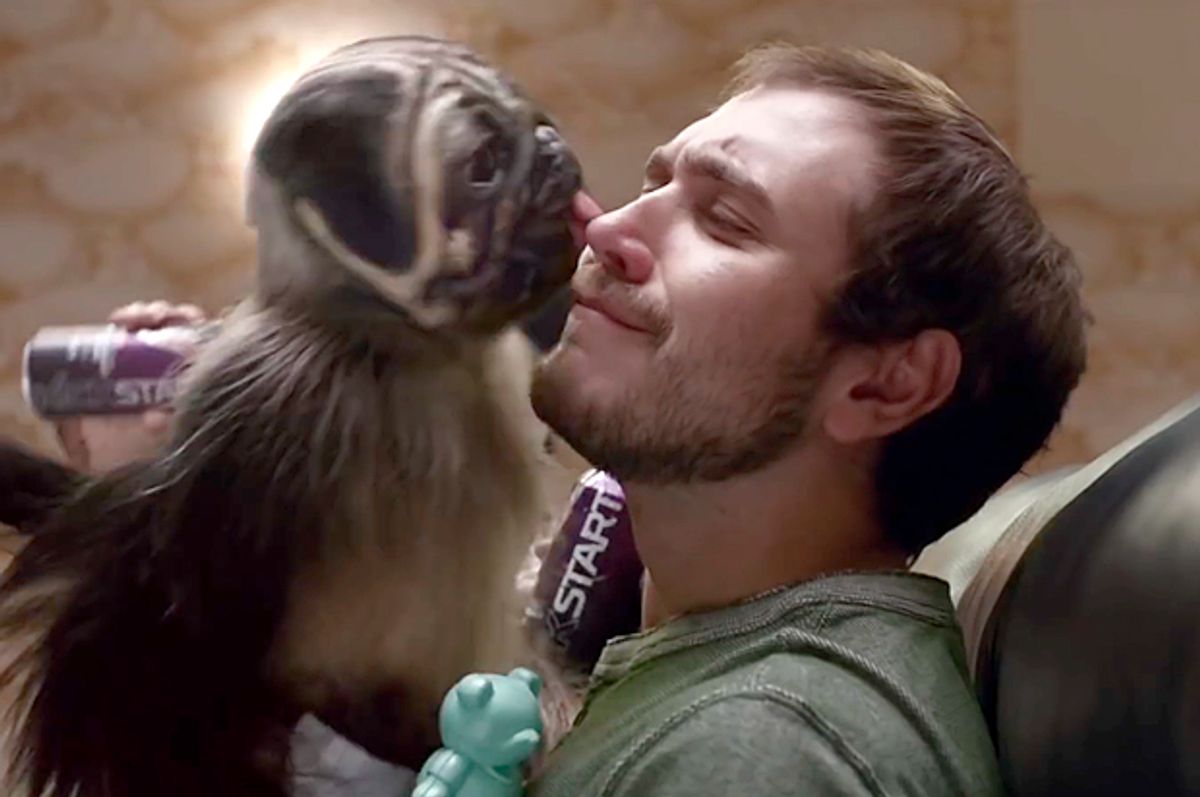 Last night’s Super Bowl showcased some great football, some decent music despite the tedium of Coldplay’s pumped-up blandness, and, as ever, a barometer on the state of masculinity. The television commercials from last night’s broadcast showed less overt sexism than in past years. Instead there was a focus, in a handful of commercials, on fatherhood. They ranged from earnest to weirdly cynical: What they had in common was more creepiness than outright sexism. The view of the genders was telling, though.

The earnest ad was the one for the "Super Bowl Babies"; it was basically a Seal music video that described the surge in births nine months after a Super Bowl in the game’s winning cities. This was a true TMI moment, played as uplift – kids from sea- to-shining-sea who now watch every game because they were conceived that night.

"Your mother and I fucked and made you after the Super Bowl," Patton Oswalt tweeted. "One day you shall sing with Seal." You can think sex and love are gifts from the heavens and find this one a little weird to have children talking about their parents’ sex lives in public in front of millions of people. But the kids are cute, the sentiment is friendly, so this one gets a pass.

Further along the weirdness spectrum was the ad in which a father chews on Doritos while his wife has an ultrasound. With his shirt unbuttoned and his face slack, this is a guy who’s not taking the impending birth of his child very seriously. When the baby (spoiler alert!) shoots out of the mother unexpectedly, the message is: Women’s bodies do weird things, and men are doofuses who act like children. Nobody wins in this one. It makes you pine for the Super Bowl Babies.

Third is the slightly weird Kevin Hart ad, in which the comedian plays an overprotective father who doesn’t trust his daughter on a first date.

USA Today has called this the funniest commercial of the night. It makes the father character look worse than either his daughter or the young man taking her out. Dad is stalking them, sure, but is the ad sexist, or is the character? Okay, you could say that the commercial is told from his point of view, but he’s mostly made to look like a jerk. It’s another where we laugh at the way men resemble children — in this case, one who’s possessive and obsessive.

The most disturbing of all the ads was the notorious Mountain Dew puppymonkeybaby commercial. You’re probably trying to forget the image right now, but for the handful of people who haven’t seen it: A bunch of stoner dudes hanging out at home encounter a strange creature who shows up, shakes a rattle, starts licking their faces, and inspires instant dancing. It will either make people avoid Mountain Dew forever, inspiring enormous therapy bills, or it will be the most talked about ad in history, jolting Mountain Dew sales for years.

There’s actually a subliminal message about fatherhood under the surface here. The combination of diaper and weird dancing animal says to men: Babies are scary and unnatural — stick to your video games and chilling with the bros. (In this way it’s a bit like the movie “Eraserhead.”) And the view of masculinity? Men are sloths who need the combination of “Dew, Juice, Caffeine” – or the shock of some strange hybrid creature – to get off their feet.

We used to get baldly misogynist ads, year after year. Last night there was nothing like the Miller Lite catfight/ mud wrestling spot from 2003:

Or the “man’s last stand” Chrysler ad from 2011 in which a dude describes all the reasons he drives a Dodge Charger (mostly because he is browbeaten by his wife):

We’ll have to consider this progress. The sexism was milder, for sure, in the commercial where the woman jumped for the bridal bouquet, or the ad with the women who are so weak, so enslaved by their libidos, that they can't focus on driving because of that hunky Ryan Reynolds.

The bad news is that in addition to the lingering sexism, men are now being cast as foolish and shallow – at least in three of these four ads. Maybe it’s about time. But this doesn’t do women any favors. It lets men off the hook: Stay on the couch, guys – this is your natural state. Instead of macho, we get infantile. Is there a way to build a commercial around mature, reasonable, and non-sexist man without talking about him having sex after a football game? We may never know, but men and women would be better off if a grown-up man could also be funny.