Can Marco Rubio be saved? Conservative media tries to clean up his massive blunder, but he's been exposed as robotic establishment stooge 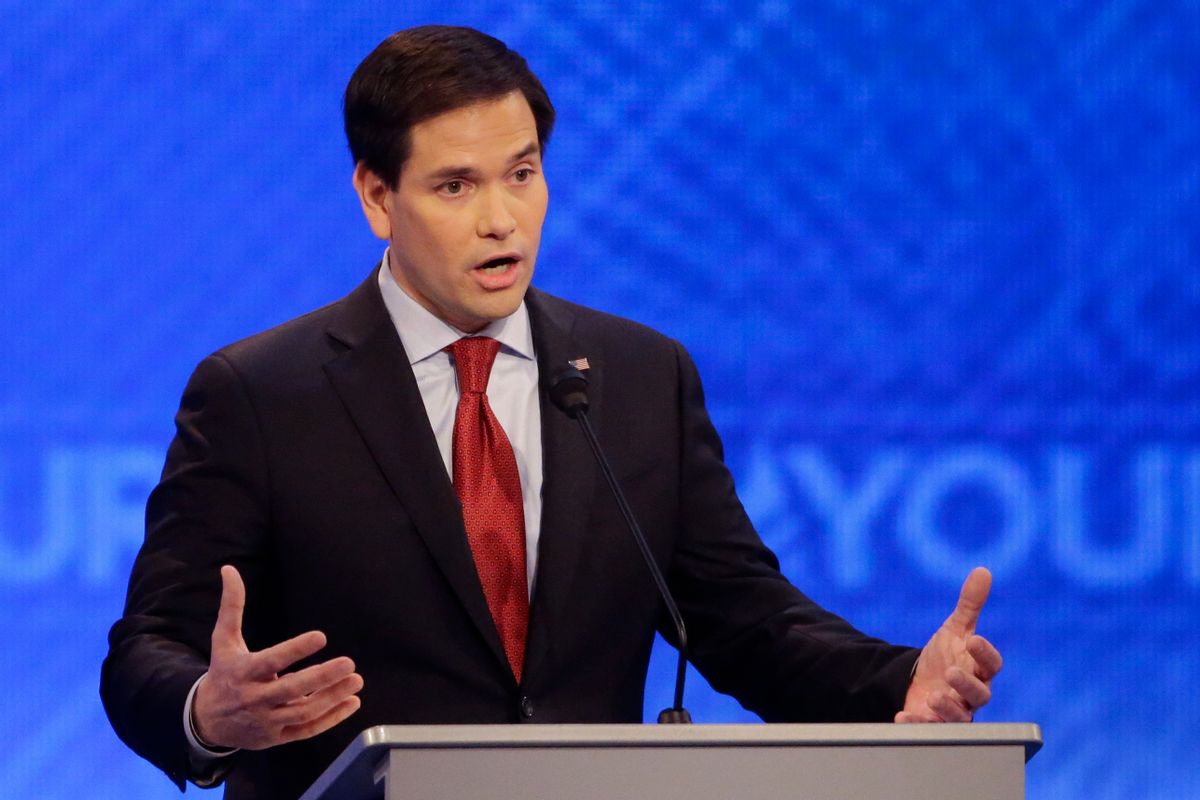 It didn't take long for the excuse-making to begin.

Marco Rubio had one of those debate moments Saturday night that was so brutal it overwhelmed everything else in the debate, when, cornered by Chris Christie with thinly veiled accusations that he's an empty suit, Rubio responded by rolling out a speech he had clearly memorized for just such accusations, even though he had recited the exact same speech, nearly word for word, just a couple minutes before. (He recited this speech a whopping four times during the debate.)

When your retort to accusations that you're a preprogrammed robot is to act like a non-player character who only has four preprogrammed lines in a video game, it's going to be memorable. There's no getting around it.

Seeing as how Rubio was the life raft that establishment conservatives were hanging onto — a right-wing extremist who has base appeal but is glib enough to appear "moderate" to gullible media and swing voters — this moment was a huge blow. It wasn't just a gaffe, but a moment that strikes right at the heart of the argument for voting Rubio over Ted Cruz or Donald Trump, which is that he's more electable. After all, Christie's attack was constrained by a need to support other Republicans, which he tacitly admitted by repeatedly emphasizing that he likes Rubio. Hillary Clinton or even Bernie Sanders, however, will not be constrained in such a way.

The realization that this is bad, real bad, washed over conservative media in the aftermath. On the immediate post-debate coverage on Fox News, there was very little sugarcoating, with Rubio's performance being described as a "flop" and "absolutely bizarre." John Podhoretz of the New York Post, the next morning, called it a "performance failure" and joked that Rubio was "possessed by a demon."

But Rubio remains the great hope for beating Trump and Cruz, so conservative media got right to work trying to do some cleanup for Rubio.

The National Review, which stuck its neck out by publishing the laughable "Against Trump" issue last month, clearly has a lot riding on the hope of Rubio-mentum, and so one columnist after another rushed forward to explain that Rubio's gaffe isn't so bad, with lines like "even the very best ones fumble" and "this debate is not going to kill Rubio."

Rich Lowry was a little less sunny, but still held out hope "that the pundits will obsess on the moment more than voters," because "Rubio was strong the rest of the debate." It's a thin straw he's grasping at. Even though the debate had relatively high ratings, most voters are going to learn what happened in the post-debate coverage, which is focused almost exclusively on this moment. And even if you did watch the debate, this moment was so memorable and cringe-inducing that it will likely wipe out any memory of anything else that Rubio said or did.

Hugh Hewitt's attempt at spinning this on "Meet the Press" is almost as painful as the actual debate moment itself. "He won all of that debate, except those three minutes," he argued. "That will push him back. But he had a terrific second half."

Of course, he said this during a lengthy program segment in which Rubio's robotic nature was by far the dominant topic of conversation, immediately disproving Hewitt's point about how people will barely notice. It was nearly as embarrassing as a politician trying to disprove he's robotic with a RUN: I AM NOT A ROBOT SCRIPT during a debate.

Rubio's campaign tried a couple of cleanup strategies, including arguing that robotic repetition of talking points is a good thing, before landing on the old tried-and-true technique of blaming the media for your failures. "This isn’t the first time the media has tried to distract people," says an email the campaign sent out to Rubio supporters. "We can’t afford to let the media get away with this."

Megan McArdle, in desperation, tried the same line on Twitter.

The problem with this gambit is that there's no evidence of some kind of media plot against Rubio. If anything, the media has been doing him a really undeserved favor in forwarding his totally unearned "moderate" image he's been relying on to sell himself as the electable candidate.

What all these cleanup attempts are failing to recognize is that this robotic moment was more than a gaffe. The moment strikes at the very heart of the struggle to control the Republican Party. Rubio's talking point (Let's repeat it together: "And let's dispel once and for all with this fiction that Barack Obama doesn’t know what he’s doing") touches on one of the most enduring points of contention between the conservative base that Donald Trump's attracting right now and the more establishment Republicans.

The claim that Barack Obama is a stupid man who doesn't know what he's doing is wildly popular among base voters — see all the "teleprompter" jokes — but it's also undeniably racist. Obama is clearly a very smart man and the only real reason to deny it is naked racism.

Rubio's talking point, borrowed from Glenn Beck, is an attempt to get around this issue, to give conservatives a way to hate Obama without resorting to blatantly racist assumptions about black people and intelligence. Obviously, Rubio is also using the talking point to paint a picture of himself as a conservative version of Obama — charming, young, intelligent, but with politics conservatives like — but it's built on this larger project of Republicans to ask the base to tone down the overt racism.

Right now, however, the conservative base is in open revolt against these pleas to be nice in public, denouncing these pleas as "political correctness" and backing Donald Trump because he's seen as someone who feels free to speak off the cuff. By being so obviously programmed to speak in talking points, Rubio has heightened the contrast between the establishment demands on conservatives to play nice and watch what they say (even if they have to memorize their lines to do so) and the Trump-inspired urge to just let it all hang out. Rubio just handed voters evidence that he's the preprogrammed "p.c." robot they are sick of having to vote for, and it won't be surprising if it damages him in the New Hampshire primary on Tuesday.