David Brooks has lost all control: This is how the far right stole the GOP -- and they are not giving it back

For years, GOP intellectuals rationalized for the loons. Now it's too late for the men of ideas to regain authority 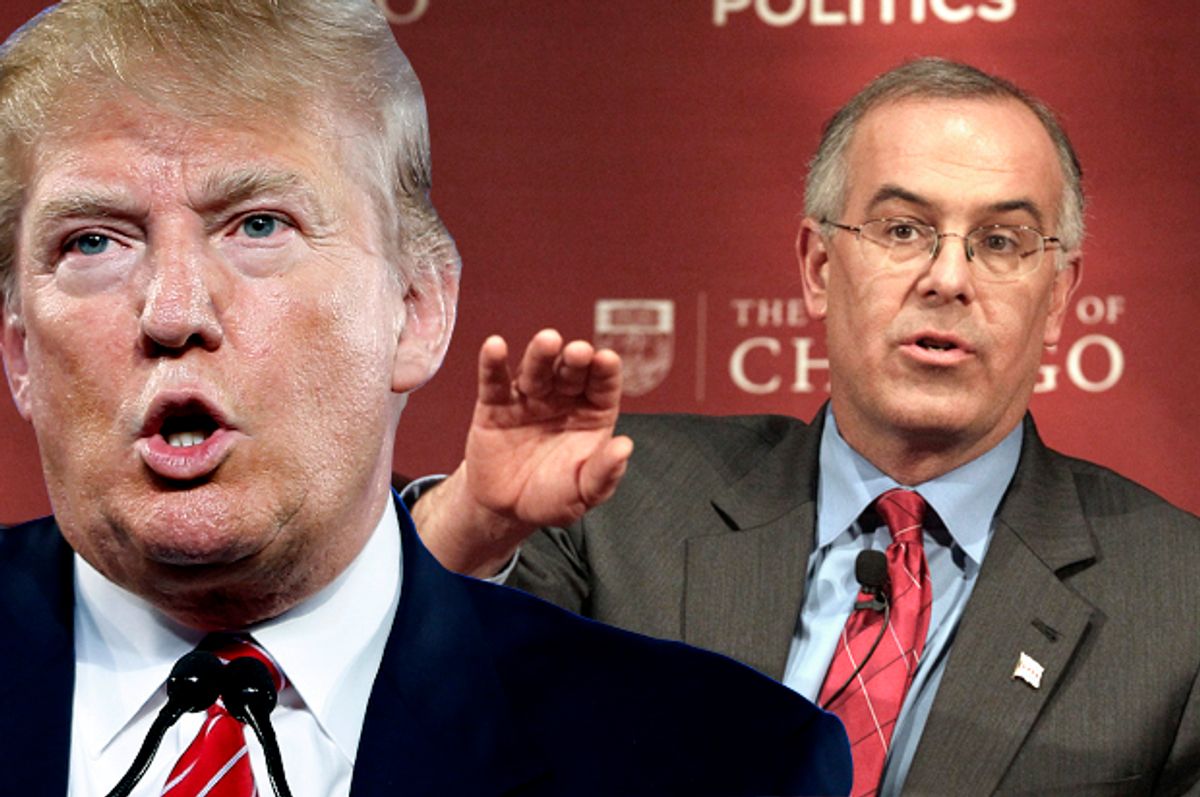 Chaos and carnage are upon us as American voters make war on “the establishment.” On the Republican side, the hoary National Review has declared in a dramatic purple-covered issue it is “Against Trump,” while conservative intellectual David Brooks pines for “gray men in suits” to shut down both Donald Trump and Texas Sen. Ted Cruz. On the Democratic side, Vermont Sen. Bernie Sanders attacks former Secretary of State Hillary Clinton for representing “establishment politics and establishment economics."

Republican leaders comfort themselves with the belief that their troubles started in 2010 with the Tea Party; Democratic leaders don’t have to look back. They can blame their problems on the Sanders insurgency.

But the leaders on both sides are wrong. The rise of a new kind of political science in the 1960s has been driving a wedge between political insiders and voters ever since. By turning voters into interest groups, it stopped establishment leaders from articulating a national narrative. It opened the way for Movement Conservatives to create today’s political crisis.

The estrangement between leaders and voters came out of the political confusion of the post-World War II years. The Democratic political juggernaut that emerged from the Depression and the New Deal meant that Republicans had to scramble to figure out a way to recover their former dominance. In 1969, after Richard Nixon had cobbled together a coalition to win the 1968 election, Republican strategist Kevin Phillips wrote a groundbreaking book titled "The Emerging Republican Majority." Arguing that Americans vote along ethnic, religious and traditional lines, Phillips proposed slicing and dicing the American electorate to keep the Republican Party in power.

Phillips was in the vanguard of those who practiced a new form of political science, often based in game theory, which turned elections into a strategy game. Insiders in both parties jumped onto this new science. They focused on hammering coalitions together by attracting voting blocs. Rather than outlining a national direction, politicians catered to those interests. They stopped talking about what America stood for and started talking about narrow constituencies. Voters became pawns to elect party leaders, rather than people whose votes helped decide the country’s direction.

But people want to matter, and they make sense of their role in the country through stories about what America means.

Into the narrative vacuum stepped political leaders who wanted to undo the New Deal consensus. These Movement Conservatives hated business regulation and the taxes necessary to pay for social welfare legislation. While politicians, pundits and journalists in the Washington bubble were paying attention to electoral percentages, Movement Conservatives were talking to voters. They attacked the government by convincing voters that regulations and social welfare legislation stole tax dollars from hardworking white people and redistributed them to lazy minorities. True Americans, they suggested, would fight back.

The Movement Conservative narrative drew on classic themes. It told of poor but hardworking individuals—outsiders-- threatened by a grasping government. In their hands, the popular legislation that actually protected Americans oppressed them. They explained that an active government needed tax dollars, and tax dollars came from the little guy. In a racist and sexist twist that drew on America’s long history, Movement Conservatives harped on the idea that those tax dollars would go to minorities and women. This story gave us Nixon’s Southern Strategy promising that he would not press integration; Reagan’s lazy Welfare Queen who stole tax dollars; the Willie Horton ad dishonestly linking a convicted black rapist to Democratic presidential nominee Michael Dukakis; and Mitt Romney’s allegation that the nation was made up of makers and takers.

This story of the little guy standing against a threatening government resonates peculiarly in America because of the legend of the American West. While the government underwrote the West more than any other region, the myth claimed that hardworking Western cowboys and settlers wanted nothing from the government but to be left alone to work out their own destiny. Translated to politics, this story gave us Arizona Sen. Barry Goldwater emphasizing his grandparents’ history on the Western frontier rather than his own privileged upbringing, former Gov. Ronald Reagan trading in his English riding clothes for a cowboy hat and cowboy boots, and radio host Rush Limbaugh lauding wealthy Connecticut-born George W. Bush as a “cowboy... in [a] white hat,” who knew right from wrong. Despite their privilege and power, in this story they were all outsiders taking on an Eastern Establishment. This Eastern Establishment, Goldwater supporter Phyllis Schlafly explained, liked big government because government contracts provided its members with big bucks.

This mythic formula of the poor outsider fighting an empire—with the American twist that made that empire serve minorities and women—worked well enough to become the driving force of the Republican Party. As one of Richard Nixon’s advisers explained: “Voters are basically lazy. Reason requires a high degree of discipline, of concentration; impression is easier…. The emotions are more easily roused, closer to the surface, more malleable….” In 1977 this epic story shaped the first "Star Wars" movie; in 1980 it put Ronald Reagan into the White House. As Reagan explained: The struggle between Movement Conservatives and the New Deal consensus was about “whether we believe in our capacity for self-government or whether we abandon the American Revolution and confess that a little intellectual elite in a far distant capitol can plan our lives for us better than we can plan them ourselves.”

As Movement Conservatives consolidated their power in the Republican Party their appeal became more and more emotional and less and less rational. By the time of the George W. Bush administration, it no longer reflected, as one of Bush’s advisers put it, the “reality based community.” But, like any other myth, its lack of reality made it more emotionally powerful than ever. The good guys are pure and virtuous, and they are under attack: Christianity is under siege in a country that is 70 percent Christian, for example, and those who occupied the Malheur National Wildlife Refuge are fighting to kill the big government that gives “subsidies” to lazy black people despite the fact that they themselves have received subsides -- and one of the occupiers an outright loan. And the bad guys are really bad. Donald Trump has famously asserted that Mexican immigrants are rapists, and his attacks on black Americans are so inflammatory that the Ku Klux Klan uses them as a recruiting tool. Indeed, all Democrats are demons: Republican presidential candidates Carly Fiorina has asserted—all evidence to the contrary—that Democrats support Planned Parenthood because they want to kill babies and sell their body parts. The emotional punch of these allegations stays with supporters despite the fact they are false.

The national triumph of this Movement Conservative narrative explains the present political moment. Republican leaders who were previously focused on consolidating voting blocs now face two very real voter insurgencies. On one hand, those like Ted Cruz argue that rank-and-file voters feel betrayed because Republicans have not actually shrunk the government. Cruz promises to see that destruction through. On the other, Trump voters have absorbed the racism and sexism in his candidacy and are following it in pure rage. Cruz and Trump have a clear narrative. Republican Party leaders do not.

But, like Republican insiders, establishment Democrats have also suffered for lack of a narrative. The Movement Conservative story has made America a hostile place for minorities, women and those falling behind economically. Democratic voters are angry at leaders who have stayed largely quiet as the government has befriended Wall Street, gutted the middle class, slashed social programs, and endangered their health. While Clinton still works to line up narrow voting blocs, Sanders offers an alternative: a narrative of America that gives Democrats a national vision to counter that of Movement Conservatives.

Voters on both sides are angry, and neither cares much what the political establishment says, especially an establishment that on both sides is notably white, elitist and male—aside from Clinton’s refreshing candidacy-- and clearly has no idea what life looks like for those outside its bubble. If establishment figures want to regain leadership, they should try articulating a narrative for their vision of America, a narrative that lets voters choose a direction for their country.

Until then, they are preaching to a choir that has lost its audience.