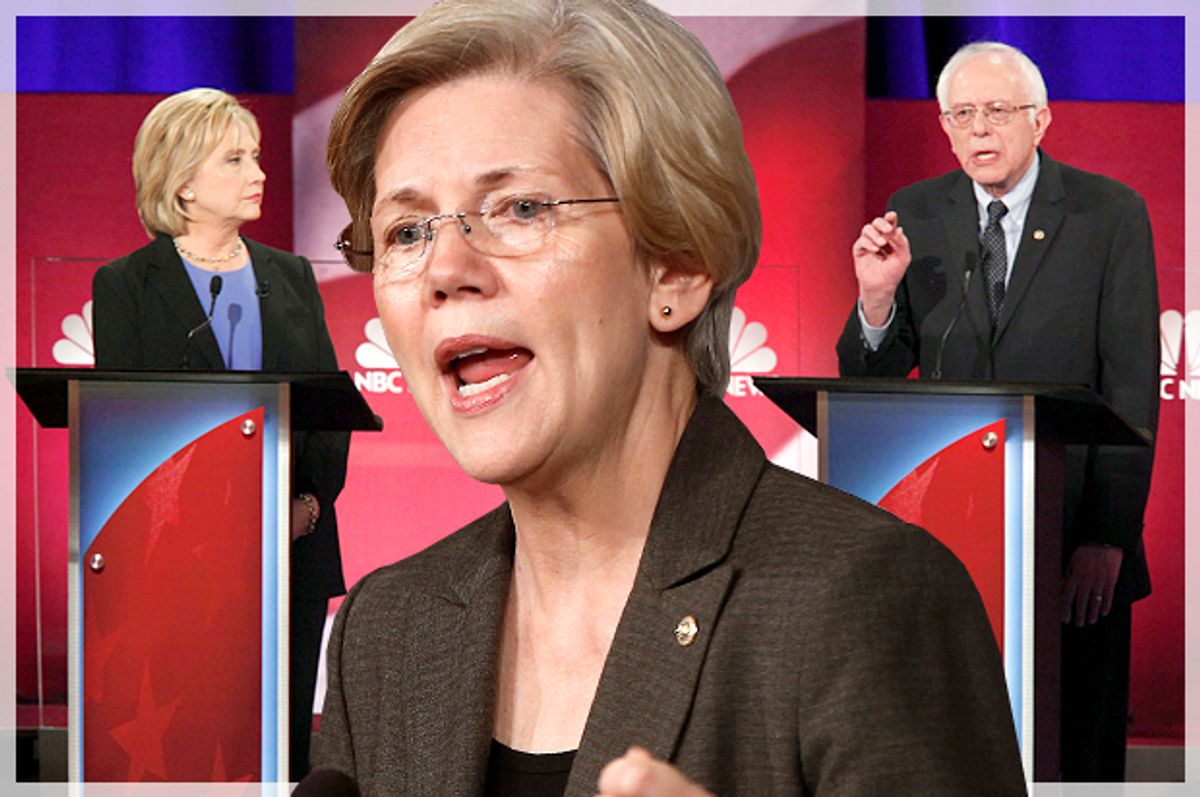 Several years before Bernie Sanders zoomed towards a virtual tie in national polls with Hillary Clinton, Elizabeth Warren began the discussion about Wall Street's influence in American politics. Warren even declared in 2014 that a portion of President Obama's Omnibus bill "was written by Citigroup lobbyists." Few politicians have directly accused investment banks of writing U.S. laws.

The Massachusetts Senator was able to introduce the topic on a national stage, and even though Sanders has spent his entire career championing the same message, she succeeded in publicizing a sense of urgency. Warren paved the way for Bernie, and in doing so, helped the Sanders campaign undermine Hillary Clinton's enormous political machine; a monstrosity that benefits from the status quo. I explain why Bernie Sanders has already made Clinton's political machine implode in the following YouTube segment.

The Atlantic has a provocative piece by Conor Friedersdorf that all Americans should read titled "Hillary Helps a Bank--and Then It Funnels Millions to the Clintons." Let's just say the article gives some insight into why Hillary Clinton is paid millions for speaking engagements. If you haven't read Friedersdorf's article, then you won't know why there's so much desire to read Clinton's speech transcripts.

Hillary Clinton's political machine, which runs on a peculiar form of "honest graft," as stated by Walter Russel Mead, has been undermined by a political revolution within the Democratic Party, and within American politics.

Nobody has been able to highlight why Bernie Sanders is needed by African Americans, Latinos, and all Democratic voters better than Tim Black in this powerful segment of Tim Black TV. Only Bernie Sanders has harnessed the full power of an electorate disgusted with politicians yet to disclose the transcripts of million dollar speeches. Nothing defines establishment politics better than a Democrat who takes money from the same interest that harm core constituencies of the Democratic Party.

Hillary Clinton has accepted campaign contributions from two major prison lobbyists, Wall Street, and the oil and gas industry, yet promises progressive stances against all these interests.

In fact, Marco Rubio and Clinton take almost the same amount of money from prison lobbyists, as stated in Vice article titled How Private Prisons Are Profiting From Locking Up US Immigrants:

VICE reviewed federal campaign disclosures and found that lobbying firms linked to GEO and CCA have already contributed more than $288,300 to three of the leading candidates. Clinton's Ready for Hillary PAC received $133,246 from lobbying firms linked to GEO and CCA. Rubio's PACs and campaign have taken a total of $133,450 from private prison companies or groups that lobby on their behalf. Bush's campaign and his Right to Rise Super PAC have received $21,700 from lobbying groups affiliated with GEO and CCA.

When Marco Rubio and Hillary Clinton take essentially the same funding from GEO and CCA, and Jeb Bush actually receives less money than Clinton and Rubio, establishment politics proves ideology takes a back seat to cash.

Like rival prison gangs, Republicans and Democrats will glare at each other across the yard, but cut lucrative deals when the guards (the American people, in this case) aren't looking.

In 2016, it's Bernie Sanders and Elizabeth Warren's economic message, along with Dr. Cornel West's social message, against America's political establishment. While Warren hasn't officially been picked as Vice President for Bernie Sanders, there's few better than Massachusetts's Senator. Anyone other than Warren or Nina Turner (Terrell Jermaine Starr has a brilliant interview with the Ohio State Senator), and I'd be very disappointed, in addition to the fact that any other choice from Warren or Turner would halt the immense momentum of the campaign.

As for idealism versus pragmatism, it's not pragmatic to use a private server ("It was sitting there in the basement") for "convenience." Pragmatism, and "getting things done" to both Sanders and Warren means breaking up Too Big to Fail Banks, reinstating Glass-Steagall, ensuring we never again rescue failed corporations (socialist George W. Bush forced nine major banks to "accept partial nationalization" and urged government to own private business in 2008), and solving the conundrum of massive wealth inequality.

On foreign policy, Bernie Sanders offers a change from the usual hawkish rhetoric of both parties, and a choice from the unrealistic prospect of funding perpetual Middle Eastern wars.

While Hillary Clinton advocated sending U.S. ground troops back to the Middle East after the Paris attacks, Bernie Sanders warns against perpetual wars and says "I'll be damned" to more quagmires.

Only several months ago, The Guardian ran an article titled "Hillary Clinton Calls For More Ground Troops as Part of Hawkish Isis Strategy." The former secretary of state advocated sending American ground troops back to the Middle East, in addition to a no-fly zone against a terrorist group without an air force.

According to The Guardian piece, "Hillary Clinton distanced herself from Barack Obama's strategy for defeating Islamic State extremists on Thursday in a sweeping foreign policy speech that called for greater use of American ground troops and an intensified air campaign."

As for Marco Rubio, Cruz, and Trump, their foreign policy will be similar to Clinton's, especially since the former secretary of state will have a "neocon" foreign policy (and neoconservative advisers, aiming to regain influence) according to leading historians. Also, actress and feminist icon Susan Sarandon highlighted on Twitter the scandal few people are talking about. This controversy is explained in a Mother Jones article titled "Hillary Clinton Oversaw US Arms Deals to Clinton Foundation Donors":

In 2011, the State Department cleared an enormous arms deal: Led by Boeing, a consortium of American defense contractors would deliver $29 billion worth of advanced fighter jets to Saudi Arabia, despite concerns over the kingdom's troublesome human rights record. In the years before Hillary Clinton became secretary of state, Saudi Arabia had contributed $10 million to the Clinton Foundation, and just two months before the jet deal was finalized, Boeing donated $900,000 to the Clinton Foundation, according to an International Business Times investigation released Tuesday.

First, why is Clinton accepting money from foreign governments? Second, your answer will explain whether you're voting for Clinton, a Republican, or Bernie Sanders in 2016.

During his Congressional speech protesting the Iraq War (while establishment Democrats sided with Bush), Bernie Sanders presciently stated "Mr. Speaker, in the brief time I have, let me give five reasons why I am opposed to giving the President a blank check to launch a unilateral invasion and occupation of Iraq and why I will vote against this resolution."

Sanders passed the biggest foreign policy test of our generation, voting against the Iraq War.

Over 500,000 have died from the Iraq War, something that Clinton failed to predict when siding with the Bush administration. She then repeated the same mistake in Libya, advocating a bombing that resulted in civil war and a country becoming a "massive safe haven" for ISIS.

While Sanders correctly foreshadowed the rise of unintended consequences like ISIS, Clinton now simply refers to her Iraq vote as a "mistake."

Certain people, however, simply never learn from their mistakes. Even with the knowledge that arming the Syrian rebels "has not been found to be effective" and cost $500 million, CBS News writes that Hillary Clinton still wouldn't give up on training Syrian rebels.