Jeb Bush's fatal flaw: After years of campaigning, he still doesn't know how to campaign 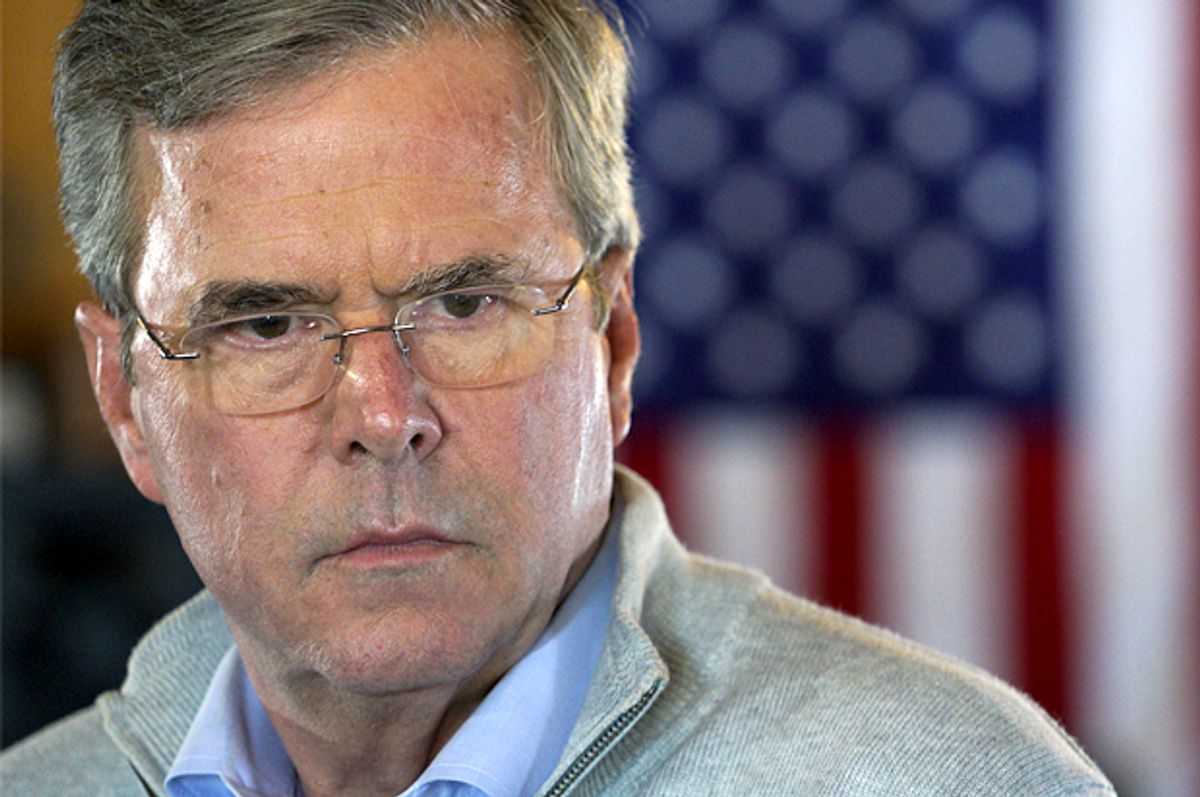 The question that comes to mind after watching the question-and-answer portion of Jeb Bush’s town hall in a crowded middle school cafeteria in Bedford, NH, on Saturday : Does the man want the job of president, or does he want a pat on the head for all the great stuff he claims to have accomplished while he was governor of Florida?

For some months now, Bush’s shtick has been to run as the “Whatever” candidate. As in, “Vote for me, or vote for Donald Trump if that’s what you want. Whatever.” It was like watching a teenage nerd who really, really wants to make the honor roll pretend to be too cool to care about making the honor roll.

Indifference as a campaign strategy. You could almost like it, if not for the fact that you know deep in your bones that anyone who runs for president has to be a single-minded egomaniac, and a loss is going to sting. Especially a loss to a con man like Donald Trump or the suppurating bed sore that is Ted Cruz.

Besides, if your super PAC has invested $100 million in you, you could at least pretend to want to win.

Here’s the thing about Bush: He might genuinely want to be president, but he doesn’t have any idea why, so he somehow comes off as both enthusiastic and indifferent at the same time. It’s not so much the sense of entitlement to the office that one sensed from Mitt Romney in 2012. Nor is there any sense of noblesse oblige that, say, Jack Kennedy at least nodded in the direction of when he was wending his way to the White House.

With Jeb, it’s more that being president is something that Bush men just do, and he is honestly bewildered that he has to explain himself.

But anyone running for office has to tell the voters something. So the solutions he offers when audience members question him about specific issues are a lot of babble. Asked about what he plans to do to solve the long-running and seemingly intractable problems with the Veterans’ Administration’s ability to care for vets (left unsaid is that his brother created so many thousands of said veterans), Bush promises “to turn the VA upside down and shake it and fire people.” Also, to “empower veterans” to go outside the system for whatever care they need, which would still presumably be paid for by the VA.

How this would cut down on the bureaucracy Bush decries (correctly) as the major obstacle to VA reform is not clear. But then, all of his issues positions are like that. A Bush answer involves first restating the problem posed by the question. Then he talks about some solution he found as governor of Florida that is tangentially related to the issue. Then he says he’ll cut out all the Washington bureaucracy, thus empowering the people/veterans/students/seniors/businesses or whoever else to “rise.” Then, presumably, America flourishes.

Adding to the discombobulation, Bush also peppers his answers with the kind of garbage right-wing talking points that make him sound like a talking Twitter egg. He repeats a debunked canard that Obamacare “nationalized the federal student loan program,” adding “Like Venezuela,” a line that lands like a lead balloon among this audience of moderate – or at least not-crazy – New England Republicans. Right-wingers, on the other hand, would snicker at him for not explicitly calling Barack Obama a socialist who shook hands with Hugo Chavez. You’ve got to know all the code words to get the far right on your side, which is why Ted Cruz’s rallies are opiates mainlined right into the wingnut bloodstream.

This is the pit Jeb Bush has fallen into in this campaign. He’s not anywhere near capable of convincing the right wing that he’s conservative enough to satisfy it. He’s not really interested in the nitty-gritty of government beyond the minimal effort it would take to toss a few crumbs to the proletariat. (In that sense, he comes off just like his father did in the 1992 campaign.) And he is utterly perplexed that somehow, this muddled disinterest combined with his having all the charisma of an avocado isn’t enough to get him more attention. Just look at his lead quote in this Boston Globe story to see for yourself.

But he’s also got a competitive streak, which is why he’s likely to stay in this thing for a few more weeks. He’d like to do some damage to Trump, and to challenge the manhood of his former protégé Marco Rubio. It might complicate the establishment’s efforts to get some moderates out of the race so the party can coalesce behind a Trump alternative. But why should he? It’s not his fault that all the alternatives are terrible.