Samantha Bee's "Full Frontal" nails it: Your new must-see late-night show takes down the GOP, Hillary and Bernie, and her "woman-ness" in hilarious debut

"Jeb?"—a segment done in the style of a Werner Herzog film!—is a mark of just how weird and great this show will be 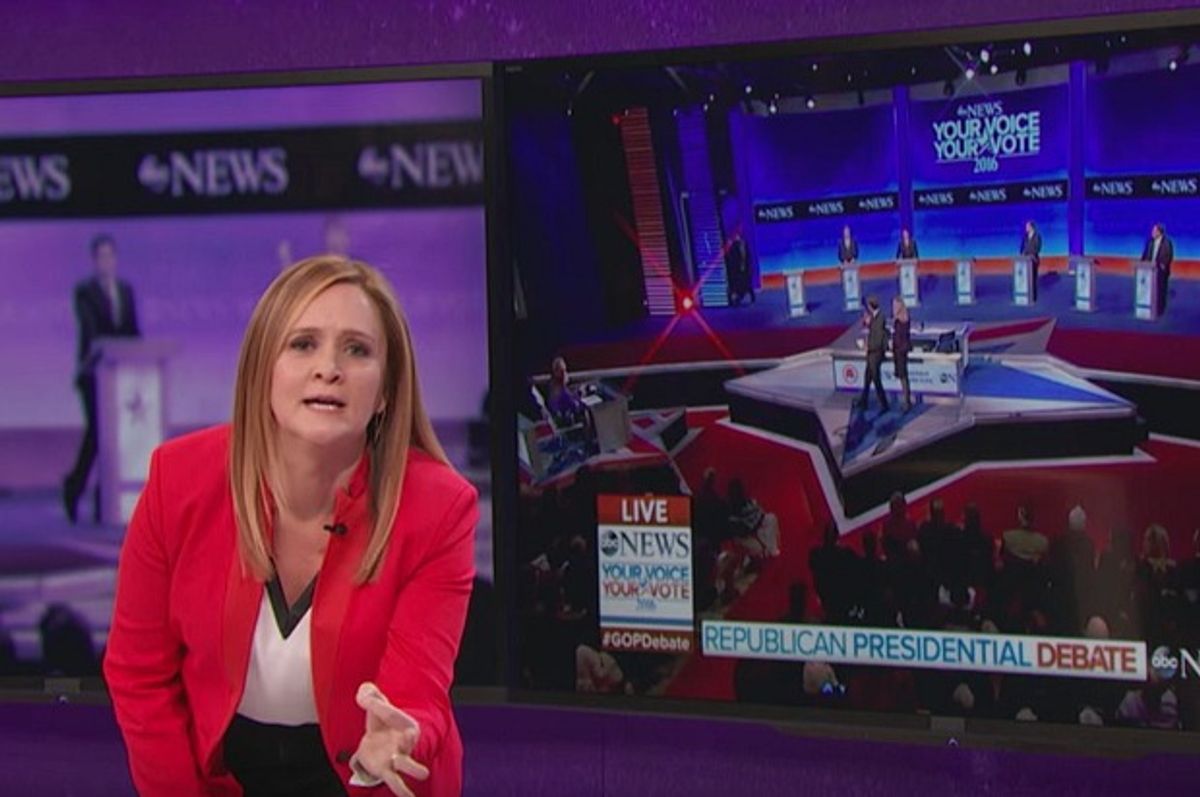 Samantha Bee’s “Full Frontal” debuted last night with an acerbic, bracing premiere that felt like, in the best way possible, a much-needed slap in the face. Because I just wrote about it—and because this is just the first episode of “Full Frontal”—it’s far too early to draw any major conclusions about the show. But what I observed when I visited the set last week is already bearing fruit: Samantha Bee is a different kind of host, channeling a kind of zany righteousness that hooks viewers right in. I saw a lot of enthusiasm for the show just on my Twitter timeline, and in part, it’s because the show (Mondays at 10:30 p.m. on TBS) felt like it moved at lightning speed. Bee’s delivery is one crackling zinger after another, and each is punctuated by her own physicality—a characteristic that had her clapping her hands together, tilting her head to the side in a combination of winsome and attitudinal, and even spider-walking backwards like Linda Blair in “The Exorcist” for one pre-taped bit.

Bee’s unafraid to go after what is technically her “side” of political debate—whether that’s the Democratic presidential candidates, who are both the subject of her needling, or the members of the press who keep asking her what it’s like to be a woman in late-night comedy. It’s both biting and a bit affectionate; she gets it, but she’s not in the mood for the same old shit. That applies for former Secretary Hillary Clinton trying to mask her ambition for the White House and Senator Bernie Sanders’ almost comical commitment to his old red Chevrolet as a litmus test for his progressivism. It also applies to the (fake) press conference she’s addressing in the cold open, as journalist after journalist quizzes her on her what it’s like to break into the comedy “boys’ club,” or how she handles being a female comedian, or, you know, her “woman-ness.” Bee knows the context, and she’s heard it all before, and she is here to cut through the bullshit. As the butt of that particular joke, it was so aware and real that watching it was both funny and a sudden relief. Like: Yes, this. Someone finally gets it.

One of the reasons that the show felt so action-packed is that it pivoted from pre-taped segments to the stage monologue with a lot of grace—and didn’t let anything linger onstage that didn’t need to. On set last week, I saw an earlier version of Bee’s second segment, the one directed at Kansas State Senator Mitch Holmes. The version I saw tonight was substantially rewritten after going through at least two test audiences. The funniest jokes were showcased; the filler that didn’t quite land was weeded out. Bee and her team found what worked and then leaned on it, and the result was a very punchy, very successful segment. Bee’s background is in sketch comedy, and “Full Frontal” progressed from idea to idea much like a sketch show; any throwaway idea or punchline became its own little piece of the broadcast. So, the press conference was the first idea, and that segued to Bee as a witch sacrificing something to the demon for success on the show, and then in the two monologue segments, Bee briefly voiced Clinton’s inner demon and then listened as several popping sounds could be heard offstage—the sounds, Bee claimed, of boners popping. It was imaginative and kind of wacky, in a freeform way that mostly belied how carefully it was put together.

The pinnacle, I think, was “Full Frontal”’s very first field segment. It’s not a field segment led by Bee; she’s not even narrating it. It’s instead a Werner Herzog-ian journey into the wilds of New Hampshire, to encounter the strange and mysterious creature known as Jeb Bush who stands on the last legs of his campaign. “JEB?” the title for the short film asks. The subtitle reads, cheekily, “EIN FILM FüR FULL FRONTAL.” And then the German-accented narrator shows us the snowy landscape of wooded New Hampshire, which includes both mountains, rivers, and a rather desolate-looking Ocean State Job Lot in a run-down strip mall (a shoutout to New Englanders if I ever saw one).

The narrator—who, in the most Herzog-esque twist, is never identified or named—rambles through the landscape of New Hampshire’s savage political climate to uncover the mystery of “Jeb with an exclamation point,” who is “getting his ass kicked” by “an oddly tinted compilation of psychiatric symptoms” (that would be Donald Trump) and “a man who seems like he would lecture a starving kitten on personal responsibility, and then deport that kitten, and his family” (Senator Ted Cruz). The crew finds two Jeb Bush supporters to interview, and asks them which beverage they’d compare Bush to. Maybe they were expecting an answer along the lines of a beer, or a cocktail, or a whiskey sour. Instead the young man responds “milk,” which leads the segment to switch to a ultra-zoomed in, ultra-messy, slowed-down long shot of a man drinking milk, making each gulp of it look like one step in a Sisyphean quest.

The segment’s view of Bush is surprisingly sympathetic, giving him the glossy treatment of a high-end documentary. The narrator is “confused” about his lack of appeal, approaching the puzzle of the other Bush son with a stylized, cautious stalk that brings the viewer both to Jeb Bush’s frankly desperate remarks in public forums and the angry, dismissive kiss-offs from young Trump supporters. They shout out the window, “Donald Trump, baby!” and the narrator thoughtfully echoes it—“Donald.. Trump... baby”—with so much faux intellectualism that you can hear the audience in the studio break out into incredulous laughter, just on that delivery. Immediately afterwards, the “documentarian” interviews a Jeb! Supporter who believes that the media’s obsession with soundbytes are why Trump is so popular—and immediately cuts him off in order to make him a soundbyte. The crew goes on to explore an “abandoned” Bush campaign office, interview a Huffington Post journalist—explaining painstakingly that the Huffington Post is “almost like a journalistic organization”—to ask what he sees when he looks into Jeb Bush’s eyes. The pause as the reporter struggles for words just drags on and on, into a montage of snowy forests.

It might be the greatest piece of satire made yet about the 2016 election; it’s definitely an incredible sketch on any show, let alone the first night of “Full Frontal”—an offbeat, niche piece of filmmaking that is both immediately topical and hilariously formal. It’s the type of thing I would expect done less well on “Saturday Night Live,” or many years later on an offbeat program like “Documentary Now!”—but it’s in the here and now on “Full Frontal.” And as I discussed last week, its appeal is that it is comfortable with the structures of journalism, and uses that to enhance its commentary. Here, “Jeb?” is a documentary film of the absurd, a seven-minute long dose of perspective and sanity in a morass of political spin. In a world far removed from ours, perhaps someone would watch this and find it to be a completely accurate rendition of the state of things in America in 2016. They would rightly conclude—like the over-the-top narrator pretends to—that Jeb Bush, in this time and place, was an object of pity.