The eternal Macklemore dilemma: Can his good intentions balance out terrible songs?

On Colbert last night, Macklemore showed how to improve his dull songs — yield the floor to brilliant talents 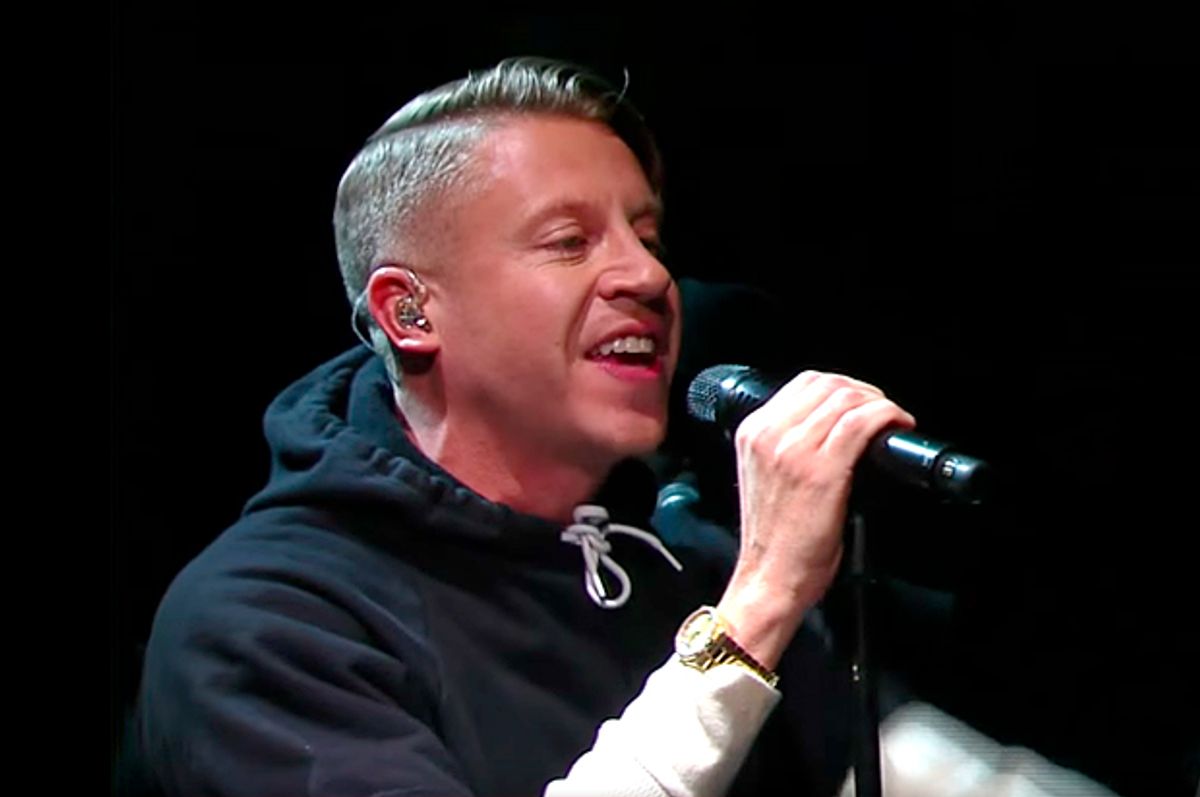 If you’re waiting for Seattle rapper Macklemore to settle down into being either a complex, artful musician expressing a deep social consciousness, or an evil, talentless hack – in other words, to fulfill the kind of categories the Internet likes -- you’ve got to keep waiting. He’s like someone put on earth to torment those who are forced to take hard positions.

Last night on “The Late Show With Stephen Colbert,” he performed “White Privilege II,” which will be part of the next Macklemore & Ryan Lewis album, “The Unruly Mess I’ve Made.” It’s both about as un-nuanced as its title, and a song that could spread the word about the debate over Black Lives Matter to an audience that’s not much been exposed to it. (This is a far cry from Beyonce’s “Formation”: “Privilege” is pitched more at the white suburbs.) Musically and lyrically, it’s a real mixed bag, but politically it means well.

Like his pro-gay-marriage song “Same Love,” which got better when Mary Lambert started singing, “White Privilege II” improves markedly when Macklemore drops out and let others take over. And for his Colbert performance, he lined up, alongside vocalist Jamila Woods ,the poets Nikkita Oliver and Danez Smith. (Oliver, a slam champion who like Macklemore is from Seattle, has a poem called “Black Lives Matter” that shows how political and aesthetic heft can exist at the same time. Smith’s "Dear White America" shows how he draws on the kind of imagery and metaphor that elude Macklemore. Fragments of both poems ended up in the song last night.)

Getting serious literary talent – especially politically risky talent -- onto late-night television is a coup in itself. It almost makes up for Macklemore’s rhythmically flat delivery and the rest of what's frustrating about the song.

Lyrically, "Privilege" is not quite sure of itself, and clumsy. “Lot of opinions, lot of confusion, lot of resentment,” he says during an interlude. “Some of us scared, some of us defensive, and most of us aren’t even paying attention.” Well, these are perfectly reasonable emotions to have during this disorienting time, but isn’t a lyricist supposed to spin the ambivalence into something more artful? You don’t need to come down in a simple way, but can’t you do better than that before you record the song, let alone go on TV in front of millions of people?

“It seems like we’re more concerned with being called racist than we actually are with racism.” Now we’re at the high school assembly. “What if I actually read a article?” Yeah, well, that would help, probably.

But I’ll give the guy points for struggling with difficult issues: He follows this by taking a tough look at his own advantages. And near the end of the song – after Oliver and Smith take the discourse to a higher level -- the vocal harmonies rising over Woods’ voice bring the whole thing together.

The entire, deeply mixed experience makes me think: Macklemore could be a great label head or facilitator, a sort of less edgy, more earnest version of Gabriel Roth from Daptone Records. The best thing he could do might be to get offstage.

And maybe that’s the way he sees himself – someone who assembles talented people for good music, good times and social justice. People like that can be full of themselves, of course, and it’s hard not to notice the messiah complex behind “Privilege” and his other songs with bumper-sticker-style messages.

Macklemore may probably always stay in this weird in-between space: Someone you can neither – if you really think about what he does – entirely love nor hate. If we want at least some of our music to be politically progressive, do we forgive it for being didactic? Maybe the upcoming Macklemore album will get us closer to figuring that out. This is what his career is about so far: It’s too late to stop now.