We wish David Brooks would just say it: While praising Obama, he doesn't put blame for decline in civility where it belongs — on his beloved GOP

Once again David Brooks gets it half-right: In criticizing candidates' antics, he forgets who's really driving it 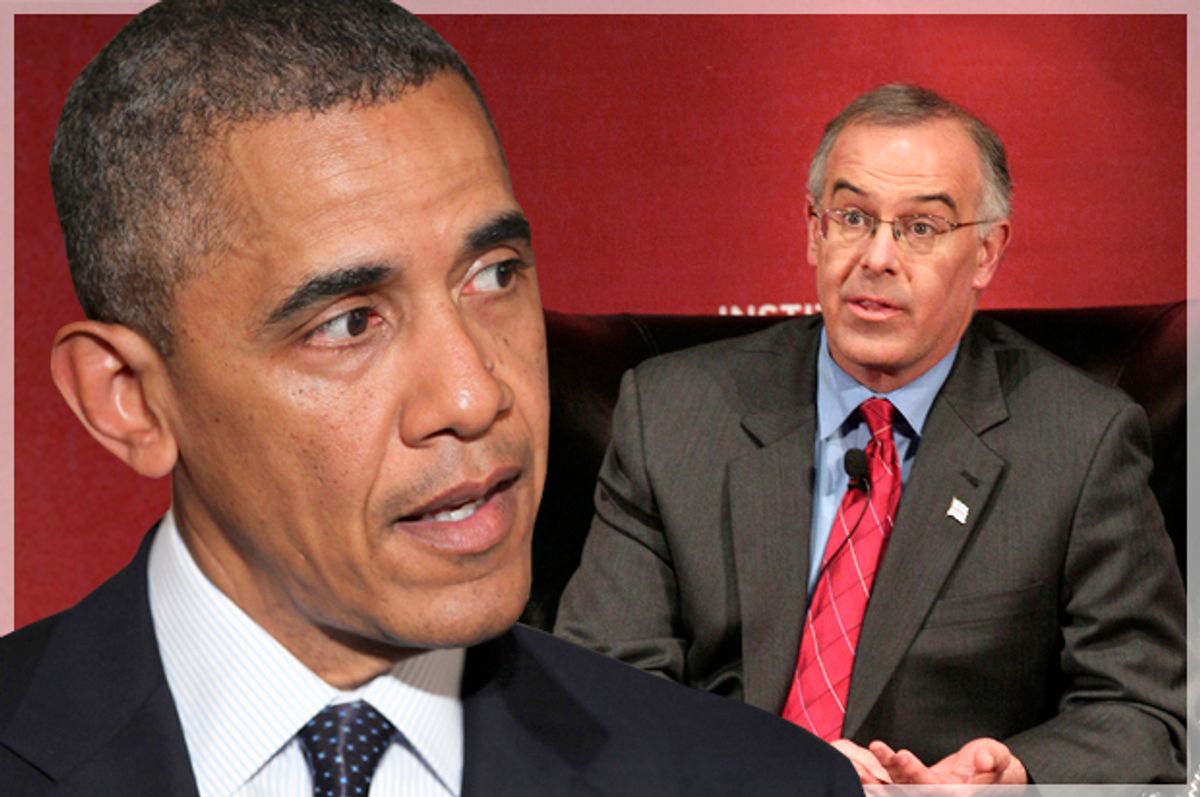 David Brooks' latest New York Times column  is something to behold. It's not often that Brooks is interesting or useful, but in this case he provides a genuine public service. Titled “I Miss Barack Obama,” the piece is a muted love letter to the president, whose dignity and grace Brooks admires. Brooks writes:

“As this primary season has gone along, a strange sensation has come over me: I miss Barack Obama. Now, obviously I disagree with a lot of Obama's policy decisions. I've been disappointed by aspects of his presidency...But over the course of this campaign it feels as if there's been a decline in behavioral standards across the board. Many of the traits of character and leadership that Obama possesses, and that may we have taken too much for granted, have suddenly gone missing.”

Brooks goes on to praise Obama's integrity, humanity, and the “soundness of his decision-making process.” “Obama's basic approach,” he writes, “is to promote his values as much as he can within the limits of his situation.” This is another way of calling Obama a prudent president, which is undeniably true.

The service Brooks provides is to illustrate how disconnected the current Republican candidates are from terrestial reality. Ted Cruz has called Obama “the most radical president this nation's ever seen.” Rubio can't speak for 10 seconds without repeating his refrain about Obama wanting to “systematically” undermine the constitution and destroy “many of the things that made America special.” Trump says Obama is “probably the worst president in the history of our country.” These are the three frontrunners in the Republican race, and their accounts of Obama's presidency are as unhinged as they are inaccurate.

As is custom, Brooks doesn't quite follow his reason to its obvious conclusion. What he can't or won't say is that he's really talking about the Republicans, not the Democrats. “Obama radiates an ethos of integrity, humanity, good manners and elegance that I'm beginning to miss,” Brooks writes. Does he watch the Republican and Democratic debates? Does he not notice a difference in tone and manners? There is no comparison between the parties in terms of the kind of rhetoric being used.

Clinton and Sanders have real differences, but their debates have been collegial, substantive, and productive – their conversations aren't insult-riddled spectacles. Brooks says “To hear Sanders or Trump, Cruz and Ben Carson campaign is to wallow in the pornography of pessimism.” Here Brooks is lumping Sanders in with the Republicans in order to feign neutrality. The truth, however, is that Sanders' campaign is nothing like Trump's or Cruz's.

The premise of virtually every GOP candidates campaign is that America is in the toilet (thanks to Obama, of course). This is essentially all that Trump and Rubio talk about. Rubio, in particular, can't stop blaming the Democrats for killing the American dream, a preposterous claim. Yes, Sanders talks urgently about financial corruption, but his message is resolutely positive and the core mission of his campaign is to bring working-class voters into the process.

Neither Sanders nor Clinton has engaged in anything like the immigration-bashing or fear-mongering we've seen from Trump and others on the Republican side, and which Brooks bemoans in his column. A candidate like Trump is only possible in the GOP today; the vitriol driving his campaign has no place in the Democratic Party, which, for all its faults, demands more of its candidates than half-baked promises to “Make America Great Again.” Democrats have their inane slogans, too, but “Hope and Change” didn't double as Obama's platform.

All the political incentives on the right encourage the candidates to ratchet up the rhetoric, to become more frenzied and less “elegant.” It's impossible to watch a recent Republican presidential debate and not notice this. To lament the state of our discourse without so much as acknowledging these differences, as Brooks does, is dishonest.