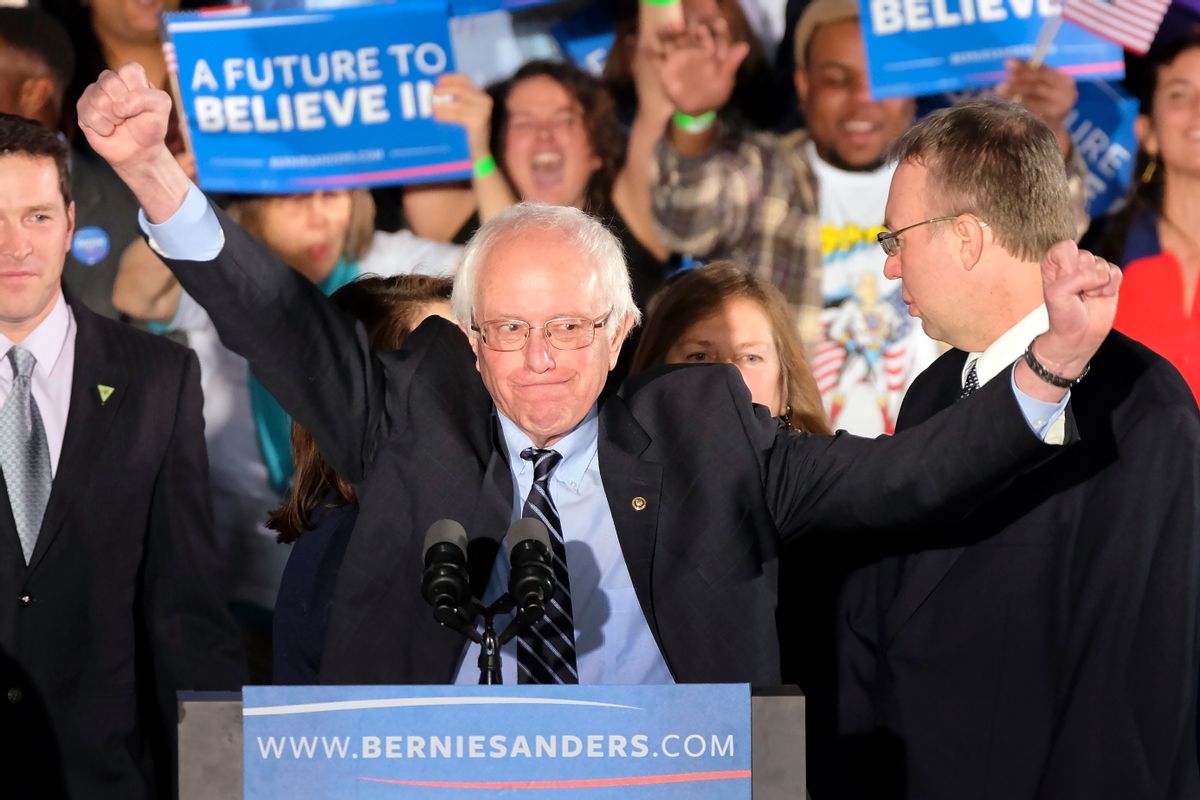 As expected, Bernie Sanders won the New Hampshire Democratic primary Tuesday night, picking up enough undecided voters, in a high turnout election, to outperform his polls going in the primary. It was an important victory, after his slim loss in Iowa.

Of course, both Iowa and New Hampshire are demographically different than the rest of the country — far whiter, more rural — and even more so compared to the Democratic coalition. The real test of the Sanders campaign is whether the pitch for democratic socialism will resonate when facing more diverse voter bases in Nevada and South Carolina and going into the onslaught of primary elections in March.

Unfortunately, there's not much to learn from the New Hampshire results that would help predict the Sanders fortunes from here on out. Exit polls show that self-declared independent voters handed Sanders his victory.

Among regis Dems, Clinton and Sanders were dead even at 50%. Sanders won indies 72-27.

Dialing a little deeper in, it's clear that the Sanders coalition in New Hampshire diverges from the typical Democratic voting base in significant ways, being younger, more likely to identify as "independent," and more willing to differ from the majority of Democrats on major issues like gun control.

This isn't a huge surprise. New Hampshire voters are notoriously independent-minded and resist the typical ideological parameters that define the party platforms in the rest of the country. Sanders himself notes this frequently, justifying his slightly more conservative positions on gun control by pointing out that in Vermont, which neighbors and is similar to New Hampshire, Democrats are more opposed to gun control than in the rest of the country.

Sanders, with his unapologetic embrace of the word "socialism" and repeated insistence that he rejects the "establishment," appeals to voters who view themselves as iconoclastic. As Nate Silver at FiveThirtyEight explained on Monday, that makes a lot of Sanders voters surprisingly similar to the Ron Paul voters from four years ago. "What’s distinctive about both the Sanders and Ron Paul coalitions is that they consist mostly of people who do not feel fully at home in the two-party system but are not part of historically underprivileged groups," he writes.

Exit polls suggest that this group of voters that helped push Sanders to his victory in New Hampshire, and without them, he would have been in a dead heat or possibly even lost to Clinton.

What this means, however, is hard to really predict. The Sanders campaign tends to frame his appeal to these normally disassociated voters in positive terms, arguing that he will be able to turn out a much bigger voting base than a traditional Democrat. In his victory speech, he highlighted how much of his campaign is funded by small donors and took credit for the high voter turnout.

"Let us never forget that Democrats win when turnout is high," he said, seeming to respond to critics who worry that a self-proclaimed socialist can't hack a general election.

The strong Sanders performance with independent voters and young voters is evidence for his contention that he has a unique appeal that will get otherwise checked out voters to the polls. However, New Hampshire is, as most pundits admit, a very different state than much of the country, and Sanders will have to continue to stack up wins on the backs of these voting groups in order to keep this case alive.

The less optimistic argument is that Sanders' unique appeal can help him in these small, unrepresentative states, but that the larger public doesn't have the same interest that New Hampshire voters have in voting for candidates that feel unique. Being iconoclastic is good for art and fashion, but perhaps not so great for wining the popularity contests known as elections, this argument goes.

Bill Clinton, stumping for his wife in New Hampshire over the weekend, made this argument, suggesting that Sanders' views come from a "hermetically sealed box."

"The online campaign is, 'anybody who doesn't agree with me is a tool of the establishment,'" Clinton continued, suggesting that the Sanders campaign is too stuck on showing off and signaling purity to build the coalition necessary to win elections.

The New Hampshire polling gives a boost to this argument, as well. The heavy reliance on young voters and independents could suggest that the Sanders campaign is not doing a good job convincing loyal Democrats, the kind of people who have been steadily donating and voting for many election cycles. These are the folks that get demonized as "establishment" and might not be thrilled to vote for someone who, as Clinton warned, has a small army of supporters who suggest that everyone who doesn't get on board is just a corrupt stooge or just pretending to be liberal.

That's the problem with New Hampshire coming so early in the primaries. Its unique voter base just makes it hard to say, either way. Is Sanders a unifying candidate who will ride a wave of previously disconnected voters to victory? Or is he a novelty candidate who appeals mostly to people who are more interested in posturing about how pure they are instead of building coalitions? Looking at these numbers, it could literally go either way. We won't know until the end of the month, after results from Nevada and South Carolina come in, whether Sanders is bringing a new Democratic coalition together or tearing at the existing one.

One thing is for certain: The already highly contentious struggling over this question, going on both online and off, is just going to get more pitched in the coming days.