Kanye 2020 is in trouble: His "Bill Cosby innocent!" tweet goes beyond harmless trolling

Was he kidding? Just bored? Whatever prompted him to dismiss the Cosby accusers, West might push fans too far here 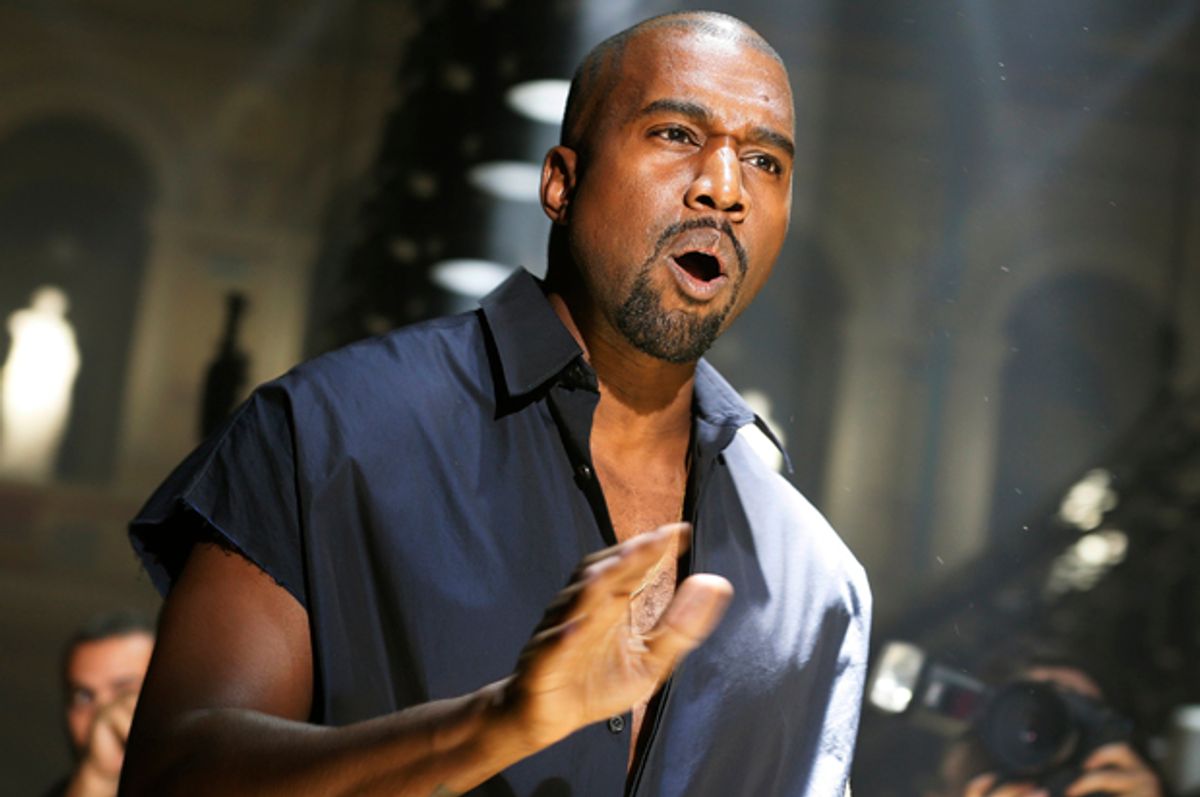 For a long time now, Kanye West has existed simultaneously as a rap musician, an outspoken social critic (“George Bush doesn’t care about black people”) and a frequent and much-followed Tweeter. He veers from the mild (his love of fonts, praise for his wife, frequent photographs of fashion fittings) to the boastful (his new album is not the album of the year but “the album of the life” and “the best album of all time”), and he gets into quarrels with other musicians.

Since he deleted his feed in 2012 and came back a stable family man, he’s seemed to be steady, taking his responsibility as a pillar of the hip-hop world seriously. And not just on Twitter: At the Video Music Awards, he acted with restraint for most of the ceremony, gave a memorable and celebrated speech, and declared (sort of) for the presidency. A “sort of” should follow much of what West does: He’s almost a post-ironic figure.

Two weeks ago, he took things a bit far by getting into a fight with his ex-girlfriend Amber Rose and her ex-husband Wiz Khalifa. The cool thing to do would have been to ignore the Khalifa line about his sexual habits, but the whole thing got nasty, with West telling Khalifa he owned his child. The feud burned itself out sooner than expected; West and Khalifa seemed to be friends again.

All of this is pretty standard for musicians in hip hop and elsewhere, right? Liam and Noel Gallagher would be doing this if they were coming up now, and probably the Stones as well, and it might not end so quickly. It seemed like it might just be an anomaly and he’d be back to proud husband and music-and-fashion icon.

But on Tuesday, West threw this one out:

Kanye will be on “Saturday Night Live” this weekend, and it’ll be interesting to see if he says anything besides just performing a new song. If not, his fans need to pressure him to declare whether he’s lost his mind or simply turned nasty and heartless. Because there are only so many options here.

The Cosby line goes way beyond the other online and real-world behavior; even by the standards of old West, this is pretty outrageous. It’s not about an album, his greatness, the inferiority of another musician, or his own sexual habits. This takes him over the top into truly creepy territory. It suggests that the Khalifa/Rose mess was not a one-off but the beginning of a more serious level of nastiness.

The critic Touré argued last week that the old West used to want people to think he was crazy:

Before Deletion, West’s Twitter personality was sometimes unbecoming. It was hard to tell whether he was being genuine or self-parodying — a not-unfamiliar question about his public persona in general. Maybe, deep down, he wanted everyone to think that he’s a little off, a little unhinged — that he’s a man who will actually say and do things that no one else would admit to doing. Playing crazy can be very empowering: It gives you the room to say and do anything.

That sounds like the perfect stance for an entertainer like West. He can say wild things and then disown them later. It's true that in a court of law, Cosby is innocent until proven guilty. But Kanye's not in court when he's talking on Twitter. Effectively telling dozens of women they are lying about a rape or sexual assault allegation is not cool. It’s not funny. It suggests that West may really have a problem with reality; he may really believe his own godhood and infallibility.

Instead of Tweeting about the new LeBron-inspired sneakers, West needs to tell fans what he means by his Cosby line. If it’s ironic or a joke, it’s still a fire-in-a-crowded-theater kind of moment. Whatever it is, he should engage with it now. You can’t just throw a line like that out and then change the subject.

Being gutsy and outrageous has always been part of West’s appeal: His George Bush line came at a packaged celebrity event, and he ended up offering an important statement about race and American politics. That was courage and eloquent. This is just either deranged or mean.

If West actually wants to be president some day -- which is starting to seem a bit less appealing -- he’s got to do better than this.