"Real Housewives" of the penitentiary: Teresa Giudice’s prison memoir is no "Orange Is the New Black"

Giudice profits off wacky anecdotes about her fellow inmates, who get no meaningful visibility in return 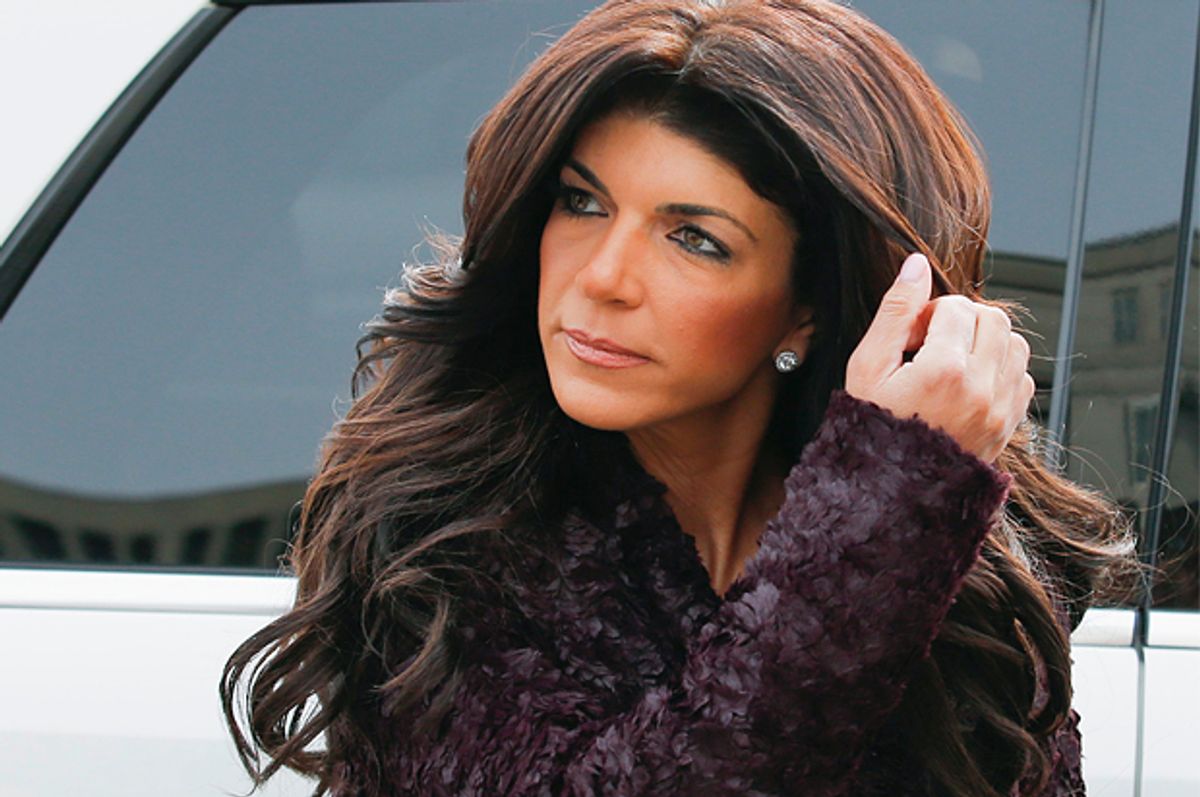 Teresa Giudice is a mother, a wife, and a reality television staple, but now she can add “prison memoirist” to her list of accomplishments.

“The Real Housewives of New Jersey” and “Celebrity Apprentice” star served 11 months of a 15-month sentence in a women’s prison, after being convicted in 2014 on several counts of fraud. Giudice details the experience in “Turning the Tables: From Housewife to Inmate and Back Again,” the latest entry in what Slate’s Jessica Grose once called the “middle-class-transgression” genre: “Girl is bored, girl seeks titillating transgression, girl regrets, girl renounces prior misdeeds, girl lives happily ever after.”

But if it seems that Teresa Giudice’s legal misdeeds would be the book’s subject of titillation, the tanned celebutante isn’t interested in introspection; in fact, she still has no idea what she did wrong. “My dad still doesn’t understand why I had to go to prison,” Giudice writes. “Neither do I.” Instead, Ms. Giudice views prison as similar to the reality television genre that granted her fame—prone to spontaneous fights and wacky antics like lesbian nookie. She recalls that her bunk became such a prime hook-up spot that her fellow inmates termed it “The Boom Boom Room.”

“If you had a top bunk, you could see over the ‘walls’ into the next cubicle, and believe me, I was thanking my lucky stars I got the bottom bunk,” Giudice writes. “I did not need a bird’s eye view of the other inmates having sex with each other, because ew.”

This is probably about what you might expect from someone whose most notable cultural contribution is screaming “prostitution whore!”, but it’s extremely alarming that women like Teresa Giudice get to profit off their kuh-ray-zee experiences, while the inmates they serve with don’t get book deals or hit television shows based off their time behind bars. A majority of these women (60 percent) will end up back in prison: Millions of ex-cons are unable to get a job because of felony convictions, while others struggle to adjust to life on the outside. For poor women of color across the country, prison isn’t a wacky anecdote. It’s an inescapable reality.

While Grose explains that the “middle-class-transgression” genre encompasses titles on stripping (Diablo Cody’s “Candy Girl”) and alcoholism (Koren Zailckas’ “Smashed”), these narratives can be dealt with in ways that are honest and illuminating. The most popular novel in the genre is currently Piper Kerman’s “Orange Is the New Black: My Year Inside a Women’s Prison,” which spawned the popular Netflix series starring Taylor Schilling, Laverne Cox, Laura Prepon, and Uzo Aduba.

Before going to prison, Piper Kerman was a Smith graduate who moonlighted as a drug trafficker. In the '90s, she began an affair with Nora Jansen, a much-older smuggler she describes as “a bit like a French bulldog, or maybe a white Eartha Kitt.” Kerman would be sentenced in 2004 for her crimes—serving 18 months in a federal prison. (Coincidentally enough, she would serve her time in Danbury Correctional Facility, the same prison from which Giudice was recently released.)

Her memoir has a bit of an “I never was the same again after that summer” vibe, because after all, Kerman has the privilege to leave the system with little risk of coming back. Years later, this could be a story she tells at cocktail parties. “Remember that time I went to prison!” she could scoff. “My, that was unusual.” After all, that’s exactly how her husband, Larry Smith, described her experiences in a 2004 Modern Love column for the New York Times—filled with “dangerous love” and “real-life glamour.” In a follow-up essay he writes, “Brassier, bolder, more adventurous than anyone I know, Piper is not your average girl.”

But what makes “Orange Is the New Black” more than fish-out-of-water angst is its consistent message of prison reform. Serving time in a women’s prison forces Kerman to recognize the extreme racial disparities in the system—one that continues to lock up black and Latina women at disproportionate rates. “We have a racially based justice system that overpunishes, fails to rehabilitate, and doesn't make us safer,” Kerman writes.

Telling the stories of prisoners of color and those living on the margins is incredibly important at a time when the rate of women behind bars continues to balloon dramatically. Between the years of 1980 and 2010, the total number of female prisoners shot up 646 percent—with 1 million women currently under the supervision of the U.S. Correctional System. According to The Sentencing Project, that increase is actually 34 percent larger than the growth in male prisoners over the same period.

The television adaptation of Kerman’s memoir goes an important step further in highlighting those stories by decentering the fictionalized Piper Chapman (Schilling) from the narrative. According to the Netflix show’s creator and executive producer, Jenji Kohan, “Piper was [the] Trojan Horse.” Kohan continues, “You're not going to go into a network and sell a show on really fascinating tales of black women, and Latina women, and old women and criminals. But if you take this white girl... and you follow her in, you can then expand your world and tell all of those other stories.”

By the end of the show’s third season, Piper has been demoted to a small supporting role, a bit player on Litchfield’s ever-widening stage.

Teresa Giudice’s memoir, however, isn’t about advocating for the voiceless. It’s about her own “struggle.” In a recent interview with ABC, Giudice explained that prison is like “living in hell.”  “It was no country club, trust me,” she recalled. “I mean, there was mold in the bathrooms. There was not running water constantly. The showers were freezing cold.” But this is less an indictment of the horrific conditions that female prisoners are subjected to than designed to showcase the fact that she can live without luxury and glamour. “I don’t need any of it,” Guidice said. “I was fine just being who I am.”

If Teresa Giudice takes great pains to indicate that she’s a survivor, her writing shows strangely little empathy for her fellow inmates’ struggles. She describes prison as “full of depressed, frustrated, bitter, and toxic people who like to start trouble just for fun.” If the time-honored advice given to writers is to write what you know, Giudice follows that mantra—detailing the catfights (usually over access to the TV) and everyday drama of life in Danbury.

There are choice moments that speak to the resilience and creativity of her fellow inmates—like when the women of Danbury teach Giudice that maxi-pads double as a DIY makeup remover. But as a celebrity who has been enormously successful at selling her own brand, Teresa Giudice knows her audience: Readers are buying the book for stories about behind-the-scenes feuds on “Real Housewives” as much as they are to read about her prison life, meaning that the novel is interwoven with on-set gossip and revelations about the program’s bitterest rivalries. The resulting book is about as deep as a birdbath.

Nobody asked Teresa Giudice to write “The New Jim Crow,” but “Turning the Tables” doesn’t have to be an exercise in casual exploitation for the sake of book sales. In fact, the Huffington Post’s Tammy Ingram argues that there can be a great benefit to tales of middle-class transgression—because they can start real conversations about white privilege and the prison system among audiences that need to hear the message. But two months after she was released from Danbury, it’s clear Teresa Giudice isn’t any more woke than when she left.

It’s just too bad many of the women in her book don’t have any other choice.