One is a Democratic Socialist, the other a xenophobic blowhard—but they've both sent shockwaves through the system 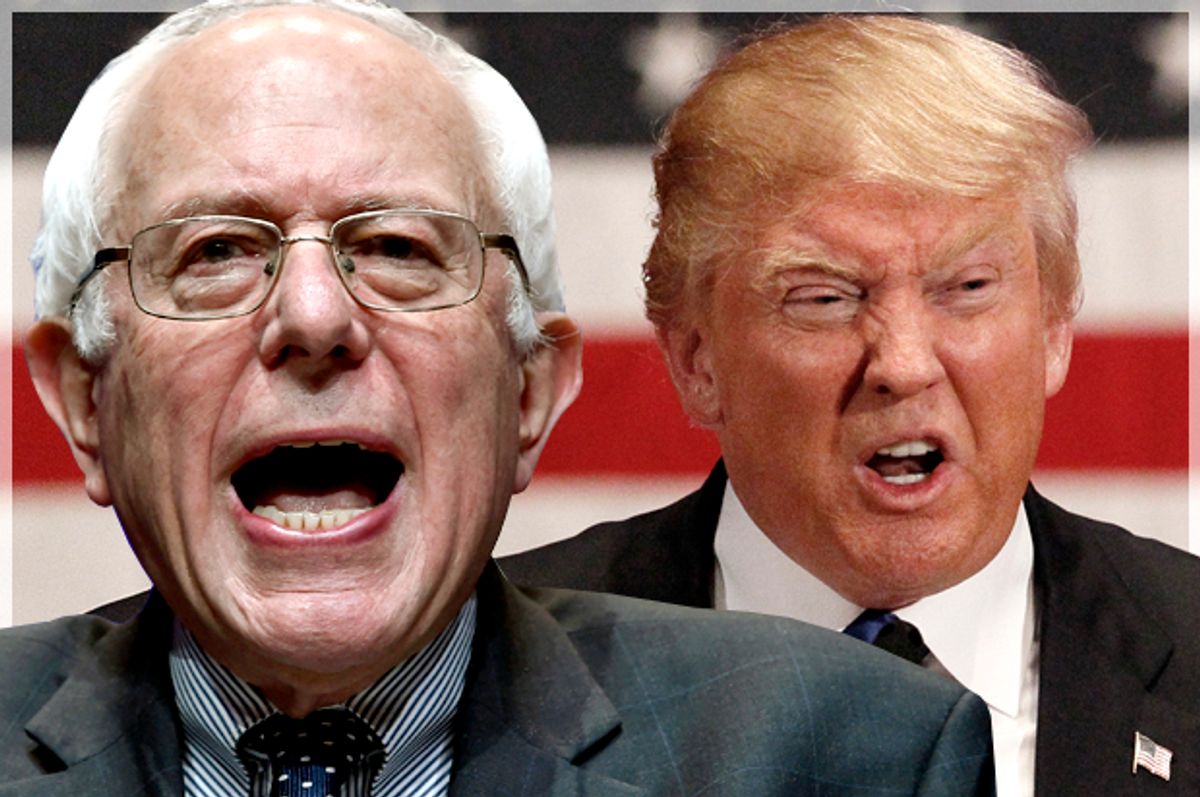 Groundhog Day came a little late in the 2016 presidential election. On Tuesday night, the voters of New Hampshire collectively saw their shadows and condemned both the Democrats and the Republicans to many more weeks of electoral turmoil. That sound you hear is the Republican and Democratic National Committees freaking the hell out.

Unfortunately for them, there's not much they can do about the continual refusal of the electorate to provide a speedy conclusion to this most discombobulated of races. In each party, the campaign is being defined by forces that have both everything and nothing in particular to do with the actual candidates running.

If you look at basically any other Western democracy, you shouldn't be too surprised that Hillary Clinton and the unappetizing mush that is Kasich/Bush/Rubio are having such a rough ride. The world is reeling from tectonic demographic and technological changes, along with the rot of oligarchical rule and continual warfare, all of which have driven the politics of country after country into great upheaval. America is no different. The people backing the National Front in France would likely find much to discuss with some of Donald Trump's supporters. The members of the Labour Party who made Jeremy Corbyn their leader over the howling objections of the party's upper echelons would no doubt have a very jolly time commiserating with Bernie Sanders backers.

In all of these cases, the pattern has been much the same: insurgent candidates rise and establishment candidates are left with little idea of how to handle them. In her speech on Tuesday night, Hillary Clinton tried to signal that she gets it, saying, "People are angry. And they have every right to be. But I know they’re also hungry. They’re hungry for solutions."

That's an almost exact echo of the kind of rhetoric anti-Corbyn forces used against him—"it is not enough to be angry at the world – you have to change the world," one of his opponents, Yvette Cooper, said in an interview—to no avail.

Clinton is hoping that she doesn't meet the same fate, and she probably won't, but the scale of her defeat in New Hampshire was quite a thing to behold. This is where the particulars of who is running begins to matter very much. She lost to Sanders in virtually every demographic category, including women—and the mix of voters who powered her 2008 victories deserted her as well. Young voters went for Sanders by a crushing 84-15 margin. Most damning, 91 percent of Democrats who told pollsters that their top concern was honesty and trustworthiness voted for Sanders. Those are bruising, brutal numbers.

Clinton's biggest hurdle—beyond the specific hurdle that comes with being a woman and carrying around 25 years of toxic political baggage—is that the very world she occupies is suddenly a deep liability for her. The Clinton who casually took reams of money to shower Goldman Sachs with praise was a woman who likely never assumed that any candidate or voter would hold that against her so vehemently. But that's what's happening. She has trouble effectively countering the Sanders message simply because donning his mantle doesn't track with who she is. One way or another, she's going to have to figure out a way to overcome that.

Her strategy, if her speech on Tuesday was anything to go by, is to try to widen the scope of the campaign. She dwelled on the racial and social issues that she would clearly like to come to the forefront of the contest now that white people aren't the only ones doing the voting, and she gave her most effective rebuttal yet to the portrayal of her as a stooge of corporate money, noting that the Citizens United decision that Sanders rails against actually stemmed from a right-wing attack on her.

Whether any of this will work remains to be seen. Clinton's team sent out a memo on Tuesday claiming that the black and Latino voters who are so crucial in the upcoming Nevada and South Carolina races "know her, trust her and are excited about her candidacy." That assumption is about to be put to a very strenuous test. Sanders is gearing up to fight her on this turf; he's even, in a move so cliched it approaches parody, meeting with Al Sharpton in New York City. The prospect of two old white people battling viciously for black and Latino votes is rather ominous. You just know somebody is going to say something terrible.

As for the Republicans—well, the words "Donald Trump, presidential primary winner" are now real. Let that sink in for a second, and then wish the best of luck to anyone trying to figure out how such an unholy mess resolves itself.