Trump's on the rise and The Marcobot is on the fritz: Why Marco Rubio's New Hampshire disaster could be the beginning of the end

Every pundit's favorite Republican was supposed to be poised to become the anti-Trump. Now he's hanging by a thread 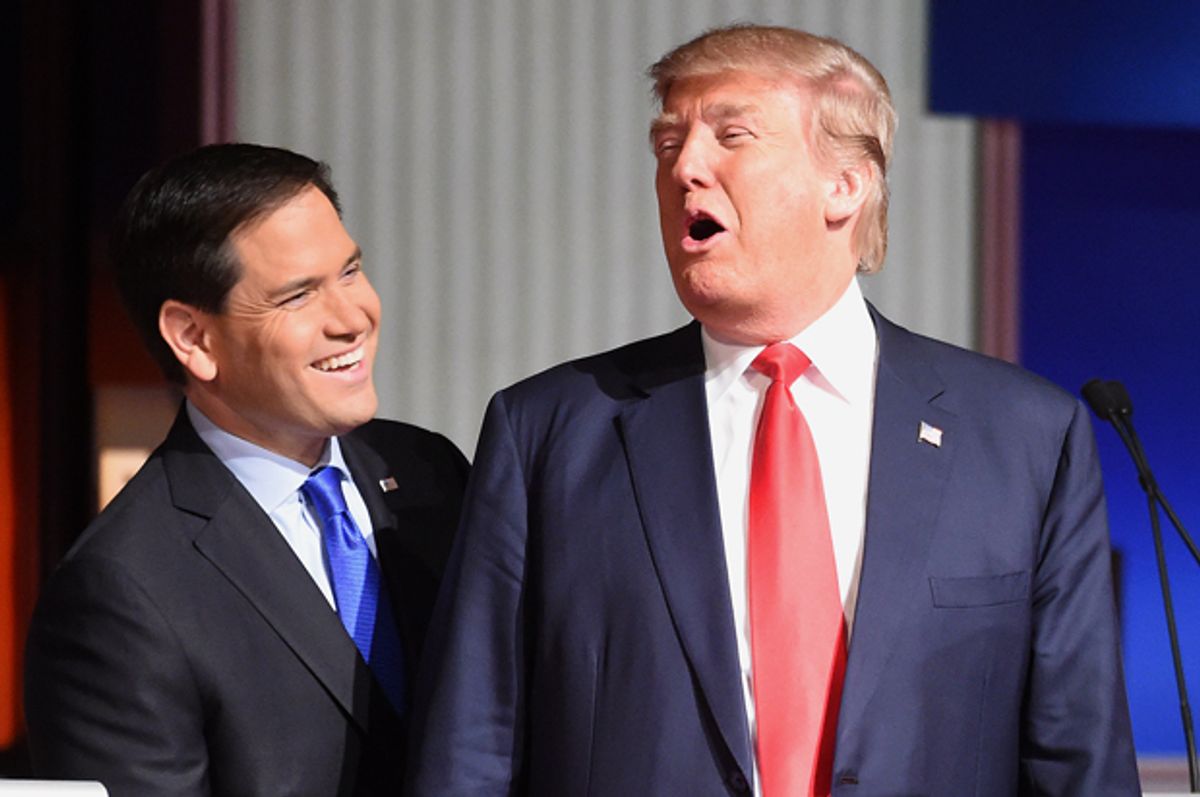 Less than one week ago, Sen. Marco Rubio had accomplished something without precedent in American history.

Having finished with 23.1 percent of the vote in the Iowa Republican Party caucuses — which placed him squarely in third-place, behind Sen. Ted Cruz and Donald Trump — Rubio managed to rebrand himself as the ascendant, inevitable nominee. Sure, he did this in no small part thanks to the GOP donor class and the mainstream media’s shared desire for Republicans to nominate a conventional candidate. But still, he did it.

Skip ahead to Wednesday morning, though, and the Rubio experience is looking much less remarkable. In fact, if Marco Rubio weren’t all but assured a big, fat salary at the lobbying firm, right-wing media outlet, or conservative think tank of his choosing, I’d be tempted to say his story was almost sad.

From being within striking distance of the White House (at least as far as some pundits were concerned) to getting clowned-on by John Kasich. Such is life in 2016 when you’re running for the presidency of the United States. As Rubio himself might say, let’s dispel with this fiction—

Wait, no, that was the problem.

In fairness, until about a week ago, no one really expected Rubio to do particularly well in New Hampshire. Compared to foes like Ohio Gov. John Kasich and New Jersey Gov. Chris Christie, he hadn’t spent much time among the Granite State’s famously demanding — some might even say jealous — primary voters. And unlike Jeb Bush, he couldn’t count on any real historical or nepotistic roots in the state.

So it wouldn’t be right to say that Rubio underperformed in New Hampshire solely because of his screw-up in Saturday night’s debate, which is fast becoming the stuff of legend. It wasn’t like he coughed up a lead; Donald Trump, who ultimately came out of New Hampshire with a victory, nabbing about one-third of the vote, had held a commanding lead in the state for months. But Rubio didn’t just not win. He finished fifth.

And it’s hard not to think his debate gaffe, and the similar one he let loose just yesterday, didn’t have something to do with turning a second-place finish (part of his “3-2-1 strategy”) into a fifth-place disaster. You don’t have to believe me, either. Take it from the Atlantic’s James Fallows, wiseman of American journalism and politics, and not one prone to hyperbole:

This was flat-out panic and mental paralysis … There is a new entry on the list of memorable self-inflicted debate disasters … I think it does very badly damage the idea that he is “quick on his feet” or “a good debater.” … Conceivably by the end of this year, a Republican-nominee Rubio, or even a President Rubio, could be looking back wryly on this episode, as a President Bill Clinton could laugh about his 1988 speech. But right now this looks very bad.

That was Sunday. Things today look a whole lot worse:

Although Rubio finished behind not only Trump but also Kasich and Cruz, it’s where he finished relative to former Florida Gov. Jeb Bush that should make his supporters nervous. The reason isn’t the animosity between the two former friends; that certainly doesn’t help, of course. But it’s not the chief source of Rubio’s troubles. The Marcobot’s major malfunction, rather, is that a Bush bump could render him obsolete.

That sounds contrarian, I know. Bush’s campaign is supposed to be dead. Increasingly, it’s come to exude a bizarre, self-aware pathos. I keep expecting Armando Iannucci to show up on “Morning Joe” to reveal that he’s been Bush’s campaign manager all along. Or, maybe, this time tragedy comes after farce, and we are watching the Passion of the Bush Family, with Jeb as the sacrificial lamb.

I mean, this video…as Nixon would say, My God:

Anyway, if that’s what the Bush campaign is, then how could it now pose an existential threat to Rubio? The answer, according to National Review’s Tim Alberta, is that Bush is the only “establishment” candidate who can go toe-to-toe with Rubio’s operation in nearly every state. Kasich and Christie were all-in in New Hampshire; they don’t have the financial or organizational capacity for the long haul. It’s just Bush.

And if Bush can persuade enough members of the GOP donor class — which includes many people who have sunk lots of money into the Bush campaign already — that Rubio’s bubble has popped, that’s a disaster for his former protege. Alberta writes:

Rival campaigns have warned for months not to underestimate Bush’s organizational strength in South Carolina. That was before Lindsey Graham, the state’s senior senator, endorsed him. There’s been buzz for some time that former President George W. Bush, who won South Carolina and remains popular there, would make his campaign-trail debut in the Palmetto State ... It’s easy to envision Jeb Bush, his older brother, Graham, and dozens of decorated military leaders backing Jeb’s campaign standing on stage together in the Lowcountry, seeking the blessing of a state whose voters have traditionally prized electability and have long been loyal the Bush family …

The former Florida governor might not win, but that’s hardly the point; his voteshare would likely be sufficient to make Rubio lose. And not just in South Carolina: Bush’s team believes they have the best operation in Nevada, something he reiterated here this morning while visiting a voting precinct.

Admittedly, the speed with which Rubio’s campaign has lurched from a near-takeoff to all systems red is jarring. It might even seem unfair. But beyond the fact that no one with a decent shot of becoming president needs your fucks, there’s another argument for why Rubio’s only getting what was always coming. When you intentionally run as a blank slate, voters may find you abnormally easy to erase from their minds altogether.