Aaron Sorkin could ruin "To Kill a Mockingbird": The last thing Atticus — or Scout — needs is his pithy, caffeinated touch 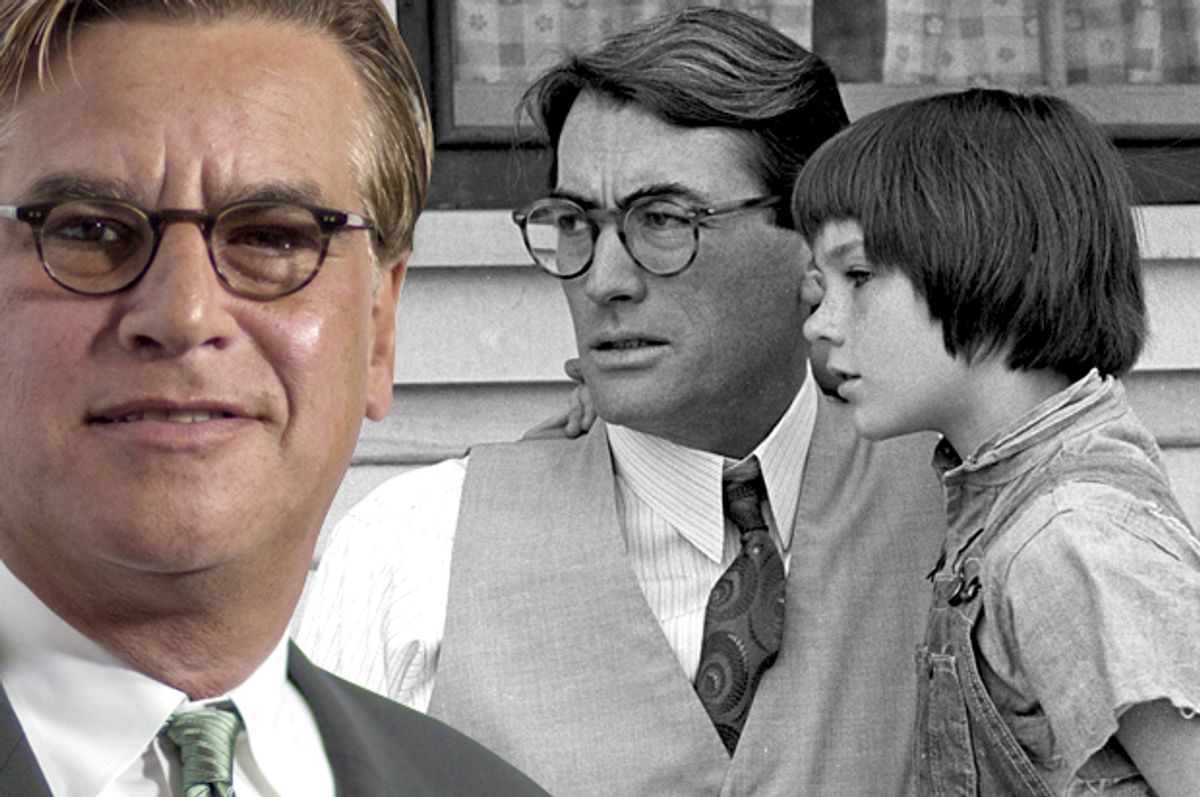 After existing for decades as a kind of beloved but slightly outdated American classic – the kind of book that kept being assigned every year even though quiet debunking accumulated -- “To Kill a Mockingbird” has seen a lot of action lately. Last year, author Harper Lee released a novel that was simultaneously prequel and sequel – written earlier, taking place later – and probably never should have seen the light of day.

The latest news – that celebrated screenwriter Aaron Sorkin will adapt the "Mockingbird" for a Broadway run – sounds like a win for everyone: An important novel gets another jolt, the Great White Way gets another blockbuster show that pumps energy into the world of live theater (something for those denied “Hamilton” tickets, perhaps?) and theater-goers get to enjoy the talents of an eloquent writer.

“Mockingbird” is even built around one of Sorkin's pet concerns. “Sorkin is a perfect match for the iconic novel, which is, of course, the story of an older man explaining liberal values to a young woman,” Nate Jones wrote on Vulture.

“It raises so many important cultural, political and social questions that Aaron is well suited to,” Bartlett Sher, the Tony winner who will direct the project, told the New York Times. “The conversation between Harper Lee and Aaron Sorkin is going to be an interesting one.”

Especially, apparently, because of Sorkin’s longstanding connection to the book: According to the Times, “After he graduated from Syracuse University, one of the ways he taught himself dramatic story structure was by closely studying the 1962 movie of ‘To Kill a Mockingbird’ and comparing it with Ms. Lee’s novel, which he reread repeatedly, he said.”

And in the era of Black Lives Matter, what could be more timely than this novel about a black man unjustly accused? But as adaptors go, Sorkin, talented as he is, is about as bad a fit for a “Mockingbird” project as anyone could cook up. His rat-a-tat-tat dialogue for high-achieving characters who are absolutely sure of themselves (Charlie Wilson, Sam Seaborn, Will McAvoy) and sometimes at least borderline despicable (the young Mark Zuckerberg, Steve Jobs) is streets away from the way people in the time and place of "Mockingbird" spoke. How does “walk and talk” work in a front-porch culture? Only David Mamet or the late Harold Pinter might be bigger stretches to adapt this book.

If you look more closely at Sorkin’s instincts and writing philosophy, the more of a mismatch it seems.

“We started at 100 miles an hour in the middle of a conversation [in The Social Network],” Sorkin told SlashFilm, “and that makes the audience have to run to catch up. The worst crime you can commit with an audience is telling them something they already know. We were always running ahead.”

Velocity is Sorkin’s great gift, but this guy’s going to slip into the cadence of small-town Depression-era Alabama? The “Mockingbird” film was adapted by Horton Foote, a Texan who knew the South and its language well.

This bit of Sorkin advice (also on SlashFilm) is actually quite smart:

…I think because of the way I write and some of the subjects I write about — whether something is taking place in the White House or a newsroom — it would be easy to look at that and feel like I’m trying to give you a lecture on ‘here’s how things should be done,’ if everybody just lived the way I wanted them to live, live how the characters are showing as an example. That isn’t on my mind at all when I’m writing. I don’t have an agenda. I certainly don’t have a political agenda.

The problem is that “Mockingbird” is absolutely about a character with an agenda: The reason it’s assigned in junior high so much is because of Atticus Fitch’s passion at explaining racial justice and tolerance. This point of view is the novel’s perspective on the world as well. Take that out, and is it still “To Kill a Mockingbird?”

Despite the centrality of Atticus, and the attention he’s received lately, it’s also worth remembering that the novel’s narrating character is not him but Scout, a woman recalling a story of her girlhood. How many of Sorkin’s best characters have been girls or women? Will Scout end up relegated to the background in her own story?

Sorkin may’ve been looking for a departure, a project to show that he can do more than pithy, caffeinated, power-driven men. He may also be working to come up with a fresh kind of “Mockingbird” with a different feeling from the novel or movie or the play that goes up in Harper Lee’s hometown. Maybe he’ll even succeed.

Given the number of brilliant, award-winning playwrights and underemployed screenwriters with talent to burn, including those who know the South and write convincing female characters, though, this seems like a case of trying to cram the project with lots of famous names. Can a role for Huck Jackman be far behind?