"Better Call Saul" keeps getting better: Romance keeps Jimmy's dark side in check — but his Cinnabon future still looms ahead

In season 2, Jimmy's life getting better in the short term makes his long-term tragedy that much more potent 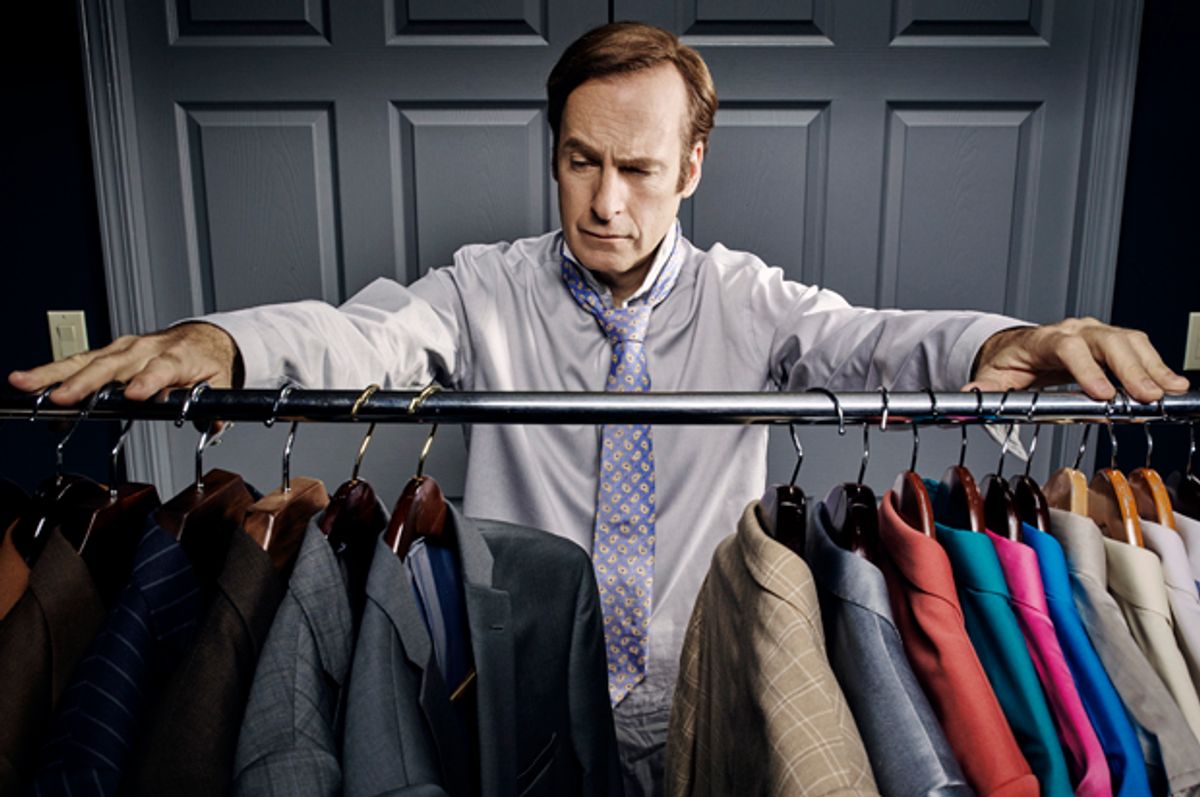 Of all the things that make “Better Call Saul” special, what really stays with you is the Cinnabon. Season 2, which debuts Monday night, begins with the same device that started season 1—a black-and-white flash forward to Saul Goodman's (Bob Odenkirk) post-“Breaking Bad,” post-Heisenberg, post-crooked-lawyer-for-hire life as an anonymous employee in a Nebraska mall’s Cinnabon, eking out survival from the world as one might a slim strand of gooey white icing from a pastry bag. He’s even post-Saul—he goes by “Gene” now. As the “Breaking Bad” spinoff and prequel “Better Call Saul” has demonstrated, Saul started out as a down-on-his-luck lawyer named Jimmy McGill, and has shrugged through identities as easily has he’s shrugged off a moral conscience. Which is to say—not that easily, and certainly not as easily as he’d like, given what life has required of him.

Showrunners Vince Gilligan and Peter Gould demonstrated extraordinary facility in the hit show “Breaking Bad” for creating a narrative experience that put the viewer in the constant excitement of being about to solve a puzzle. Season 2 of that show layered one image of a teddy bear in a pool with the rising action of that season’s arc, to reveal that it was detritus from a catastrophic event that occurred because of a decision Walter White (Bryan Cranston) made midseason. As the show went on—and the combination of ratings and critical success gave the showrunners leeway to be more adventurous—careful viewers were rewarded when stray plot threads like Gale’s gift of “Leaves of Grass” or a hidden capsule of ricin found a way back into the story. In the “Breaking Bad” universe—and specifically, through the lens of showrunner Gilligan—the world is chaotic and vast, but its details are ruthlessly scrutinized, whether that is through a fly buzzing around an empty lab or a set of keys left in the ignition. The result is a taut filmmaking style that created some of the most tense viewing experiences on television.

With “Better Call Saul,” especially now that the first season has garnered both awards nominations and ratings success, Gilligan and Gould have even more of a creative mandate than the last seasons of “Breaking Bad.” They can plant mysteries that last for the entire run of the series; they can play with visual motifs and flashbacks that pepper not just the first season, but every season, working towards a multi-season work of art that might not make sense at all until the series is completed. It has the power to be both alienating and riveting, depending on your stomach for being totally confused while watching a TV show.

What makes “Better Call Saul” gripping is the person at the center of the puzzle, enmeshed in what is becoming a greater and greater tragedy. I’ve written before about how Bob Odenkirk’s performance in the show draws the viewer in—a con man, professional liar and consummate salesman who believes, more often than not, in his own confabulations. Odenkirk as Jimmy/Saul/the man in the Cinnabon is hard to not love, steeped as he is in charm and vulnerability and a surprisingly soft heart. Season 1 dealt him a major betrayal, when the show revealed that his older brother Chuck (Michael McKean) was preventing him from advancing in his career. After that, Jimmy’s been slipping away from his own better nature, falling back into a life of crime as if it were a long-deprived addiction.

In the second season, he bounces back, sort of—buoyed not by the love for his brother that kept him somewhat respectable before, but for his love of his longtime friend Kim Wexler (Rhea Seehorn), which becomes the primary focus of season 2. Seehorn as Kim has been in the wings for most of “Better Call Saul,” as the first season worked slowly—sometimes too slowly—to establish the context of Jimmy’s pre-Heisenberg, pre-Saul life. But with Chuck’s intentions revealed, season 2 makes room for Jimmy’s relationship with Kim, and to my mind, it gives the show a jolt of emotional resonance.

The Cinnabon, ever-present in the foreground, is portending the same future for Jimmy, one leached of color and joy. But his pre-Saul life in season 2 takes on new brightness, which makes the ending we know is coming all the more tragic. The romance of season 2 is a parallel in some ways to season 2 of “Breaking Bad,” in which Jesse Pinkman (Aaron Paul) enters into a relationship with his neighbor Jane (Krysten Ritter). The difference is the knowledge of the Cinnabon; Gilligan and Gould have always excelled at putting their characters through really awful situations, but in “Better Call Saul,” they’re bringing us into their own process of knowing what happens, which gives what are at times seemingly pointless scenes an added resonance.

Cinnabon, for its part, is extremely pleased to be featured in “Better Call Saul.” The chain is giving away free coffee on Feb. 15, the day of the second season premiere, and has a cutout of Cinnabon employee "Gene"—with horrible visor, glasses and mustache—that passersby can take selfies with. The winner of the #SaulSelfie contest (rules and conditions apply), will get a trip to scenic Albuquerque, New Mexico, to tread the same streets as the criminals and broken men of “Better Call Saul” and “Breaking Bad.” “Part of our constant innovation philosophy is bringing the Cinnabon experience to fans in new and unexpected ways,” said Cinnabon president Joe Guith, hilariously, in the press release.

I can’t imagine that there is too much significance to “Better Call Saul’s" choice of Cinnabon besides how specifically evocative it is of the mall or airport experience—Thomas Friedman, New York Times columnist, was so moved by the seductive scent of warm Cinnabons that à la Proust he uses it as a framing example for his book on globalization, “The World Is Flat.” “Better Call Saul” and “Breaking Bad” before it both excelled at finding drama in the banal—and working in a mall Cinnabon is definitively banal, the kind of mindless drudgery accompanied by featureless suburbia that takes up so much space in our world. And if it’s not too twee, think of the Cinnabon bun’s shape as its own kind of storytelling metaphor, a spiral leading to the squishy center that draws Jimmy’s own character arc, as he vacillates from crime to honesty and back, motivated mostly by the basic and fundamental drive to have what he wants, whether that is Kim, Chuck or a cocobolo desk.

But the company’s own enthusiasm—and perhaps that universal appreciation that Friedman hypothesized the world holds for Cinnabon—makes me wonder if the fast-food chain will really end up being Jimmy/Saul/Gene’s devastating ending, or if there is more to the story beyond that. We might discover over the course of the next few years how he ended up taking out the trash in an Omaha shopping mall—but we might also learn that the black-and-white Cinnabon isn’t the end of the story, and if there might be some kind of path to redemption, freedom or even just contentment on the other side of the Cinnabon counter. Even if it’s just free coffee and a trip to Albuqurque and the daily smell of butter and cinnamon—that’s not a bad way to live a life.