Even GOPers can't stand Ted Cruz: Mike Huckabee unloads on Texas senator, calling him a "low-life" and a "sleazy" politician 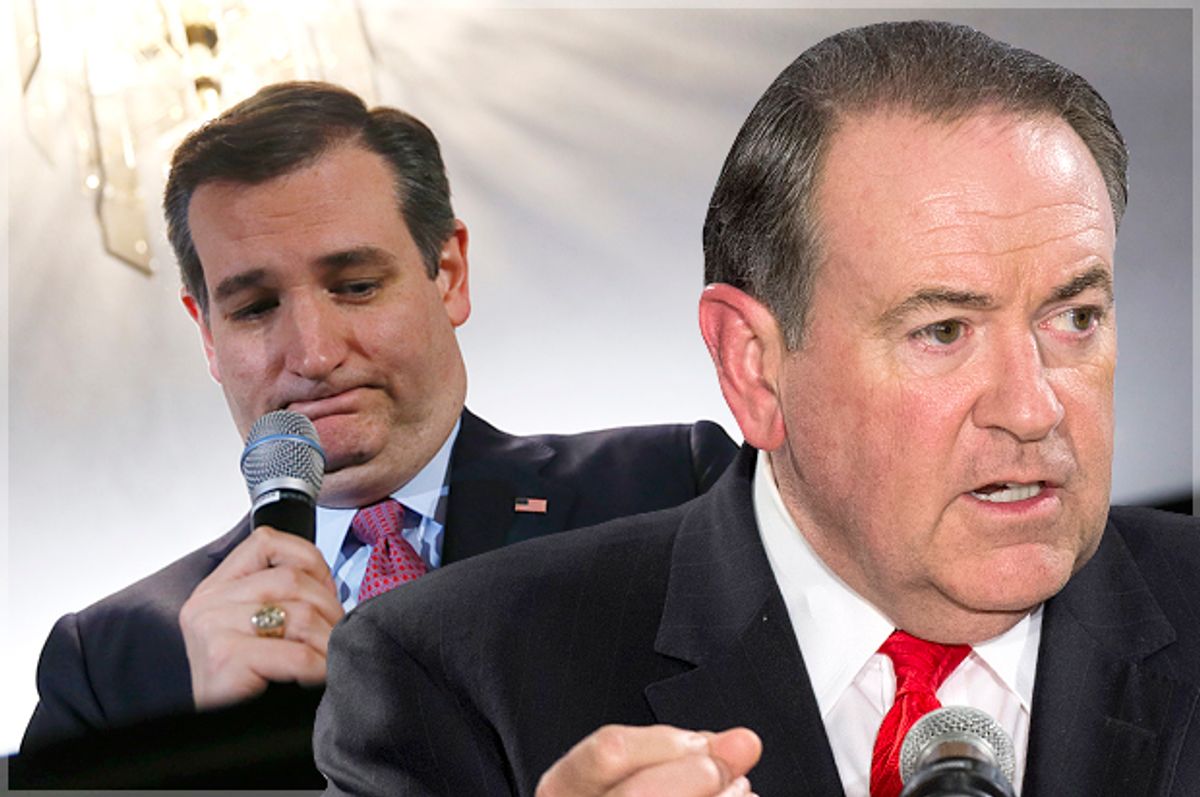 Nobody likes Ted Cruz. Nobody. Even in his own party, Cruz is a pariah, the guy no one wants to chat with after the debate's over. It's easy to see why this is so. Cruz has worked exceptionally hard to be the least liked member of Congress. Indeed, the former Speaker of the House John Boehner has publicly referred to Cruz as a “jackass” and a “fase prophet.”

Uninterested in passing legislation, Cruz has behaved like a self-promoting nihilist since the day he was elected senator. His brinksmanship was on full display last September when both Republicans and Democrats passed a temporary spending measure designed to keep the government afloat for the remainder of the year. This was a measure that had to pass, that everyone knew would pass, but Cruz used it as an opportunity to grandstand before the cameras.

After being denied a roll-call vote (yet another empty gesture), he stood on the Senate floor and unloaded roughly five minutes of conspiratorial gas. “I mentioned to you [his colleagues],” Cruz said, “that the votes were always cooked here. How is it that Speaker Boehner and Leader McConnell can promise that there will never ever be a shutdown? Because, I believe, Speaker Boehner has decided to cut a deal with Leader Nancy Pelosi.” Like most things Cruz has done as a U.S. Senator, this performance accomplished nothing legislatively; it did, however, score him a few points with the Tea Party hard-liners in his base, and that was the whole point. This is who Cruz is and these are the kinds of things he does to advance his career.

It's no surprise that Cruz's antics have carried over to his presidential campaign. His “dirty tricks” in Iowa were well-publicized, and prompted Donald Trump to accuse him of “stealing” the election. Trump wrote on Twitter that “Based on the fraud committed by Senator Ted Cruz during the Iowa Caucus, either a new election should take place or Cruz results nullified.” Trump has a point, too.

Cruz's team dispensed misleading mailers the weekend leading up the caucuses. The mailers, according a Politico report, “showed the name of the person receiving the mail at the top and then gave them a grade on an A to F scale. Below, it showed their neighbors and their voting scores. It urged them to caucus next week and warned, 'A follow-up notice may be issued following Monday's caucuses.'” Cruz also released a statement during the caucuses falsely stating that Ben Carson was suspending his campaign, an underhanded attempt to hijack Carson's supporters.

The contempt for Cruz is becoming more and more obvious as the presidential race unfolds. Mike Huckabee, who recently suspended his campaign, spoke with unusual candor about Cruz this week. Whatever you think of Huckabee, he is, generally speaking, a pleasant guy. Thus it was telling when Huckabee took time out of his most recent podcast to say the following of Cruz:

“Ted Cruz apologized for his campaign spreading a false story that Ben Carson had dropped out of the race but he deflected blame to CNN. Dr. Carson, being a good Christian, accepted the apology on a personal level, but he didn't buy Cruz's claims of innocent intentions...I can attest to the fact that even in our campaign there were many efforts to try and say that people shouldn't vote for me or Rick Santorum or Ben Carson. The Cruz people said it would be a wasted vote and they should vote for Cruz. It wouldn't have made a difference for any of us, but it is the kind of low-life, sleazy politics people truly get sick of.”

That statement is dripping with disdain, and the sentiment behind it is clearly shared by Huckabee's Republican colleagues. And you can expect to hear more of it in the future. Already an outcast, Cruz will burn every bridge in pursuit of the presidency. At this point, it's about his brand anyway. He'll never be a productive senator – that requires relationships and compromise. A scorched earth strategy is Cruz's only path to the nomination now – and it will fascinating to see just how far he goes.