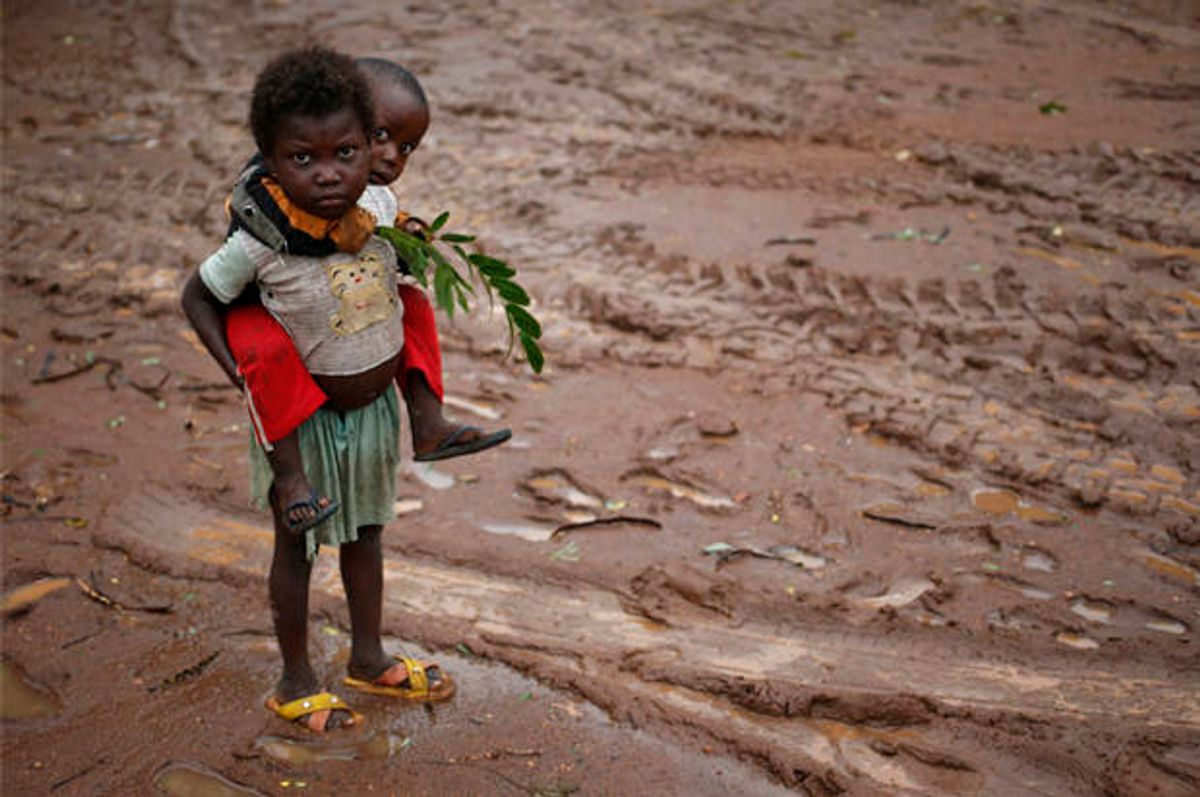 Children in the town of Boda, Central African Republic in April 2014, where just 13 percent of 1-year-olds have received full immunization coverage, and where MSF is working (Reuters/Goran Tomasevic)
--

The business practices of the pharmaceutical industry have recently come to light, as "Pharma Bro" Martin Shkreli fills the headlines. Hoping to make $1 billion, the 32-year-old pharmaceutical executive and former hedge fund manager increased the price of a drug used to treat life-threatening parasitic infections by more than 5,500 percent overnight, leading the media to dub him the "most hated man in America."

Yet these kinds of practices go much deeper, and have persisted much longer in the industry. Shkreli's company Turing Pharmaceuticals is just one among many that have been accused of charging high prices.

For years, medical humanitarian organization Doctors Without Borders has been fighting for lower prices for a pneumonia vaccine.

Although little attention is paid to the disease, pneumonia is the main killer of children under age 5 in the developing world. Nearly 1 million children around the world die every year from pneumonia. Every 35 seconds, a child perishes because of the preventable disease.

In the meantime, pharmaceutical companies Pfizer and GlaxoSmithKline, known more commonly as GSK, have made billions of dollars off of the vaccine — more than $30 billion since 2009, to be precise. Pfizer has made approximately $27 billion, and its annual financial report, released in early February, shows that the company made almost $2 billion more on the vaccine in 2015 than it did in 2014.

Moreover, the powerful vaccine MSF uses — the pneumococcal conjugate vaccine, or PCV, which essentially combines 10 to 13 different vaccines together — has gotten more expensive over the years. Today, it costs 68 times more to fully immunize a child than it did in 2001.

Doctors Without Borders says the expensive PCV is responsible for much of this price increase. The medical humanitarian organization, known internationally as Médecins Sans Frontières, or MSF, formerly launched its A Fair Shot campaign in April 2015, calling on Pfizer and GSK to reduce the prices of the vaccine.

MSF has been negotiating with the pharmaceutical companies since 2009, but says they have not been willing to reduce their prices low enough. The companies, on the other hand, argue they cannot drop the prices any lower.

On World Pneumonia Day, on November 12, activists with MSF held a protest at Pfizer's office in New York City. They carried large cases full of fake money representing the $17 million Pfizer makes in one day of profits on its pneumonia vaccines. The MSF activists requested a meeting with Pfizer CEO Ian Read, but were denied entry to the company's office.

Doctors Without Borders works on immunization campaigns around the world. It is presently the only non-governmental humanitarian organization vaccinating children against pneumonia in the Central African Republic.

Since fighting broke out in the country in 2013, the percentage of immunized children has fallen sharply. As of the end of that year, just 13 percent of 1-year-olds in the Central African Republic had received the full immunization coverage recommended by WHO.

In early February, MSF created a video raising attention to the plight of Central African children. In it, the organization calls on Pfizer and GSK to lower the price of the pneumonia vaccine for developing countries and humanitarian organizations.

Children in the Central Africa Republic are not the only ones. In Equatorial Guinea, only 24 percent of children under the age of 1 receive all of the vaccines recommended by WHO. In South Sudan, that figure is 39 percent, and, in Somalia, just 42 percent.

The Swiss-based public-private global health partnership the Global Vaccine Alliance, or Gavi, essentially maintains a monopoly on the international immunization program. The organization gets much of its funding from numerous governments, but is also largely funded by the Bill & Melinda Gates Foundation, which frequently pushes a pro-corporate, pro-privatization, neoliberal agenda, and has previously invested in large multinationals like Wal-Mart, McDonalds, Coca-Cola, BP and Shell. Gavi works with not just WHO and UNICEF, but furthermore with the World Bank and with vaccine corporations.

Under the present global system, most of the global population has not gotten all three doses of the pneumonia vaccine. Slightly less than one-third of people in the world were estimated to have gotten the full vaccination as of the end of 2014, WHO estimated.

As of January 2016, approximately two-thirds of countries in the world have introduced the PCV into their national immunization programs, according to WHO. Yet just because a country has introduced the vaccine does not mean every person in that country has received it.

Salon spoke with Kate Elder, vaccines policy adviser for MSF's Campaign for Access to Essential Medicines, to learn more about the problems in this global system.

A country makes a national decision to use a vaccine, and that is heavily influenced by price, Elder stressed. She says there are several large problems with the current system, and price plays a determining role in much of them.

For starters, Gavi only vaccinates children under age 1 for pneumonia. This means children over age 1 who did not receive a complete vaccination of all three doses are left unvaccinated.

WHO makes technical recommendations on what children should receive, and says children should have their full vaccination schedule, regardless of their age; yet only those under age 1 are treated by Gavi.

Moreover, the countries Gavi works with are based on GNI economic indicator. The governments of poor countries are given co-financing plans, which they work out with the organization. Middle-income countries like Syria, Jordan or Egypt, on the other hand, are not poor enough, so they must pay higher prices and do not receive financial assistance.

Because of this pricing system, Elder says MSF is "unable to help refugees" in many of these middle-income countries in the Middle East and elsewhere.

"Those countries don't want charity, but they want a reasonable price," Elder said. Often times, the price they are offered is too high, leading to compromises in the health system.

Even then, when poor governments do have access to the vaccine, they are often not vaccinating enough. If the health system in a country is weak, it is not guaranteed that all citizens will receive the vaccine.

Furthermore, some crisis-stricken countries, such as South Sudan, are Gavi-eligible, but their dysfunctional governments still do not have the vaccination.

Because of these problems, many people fall through cracks in the system, and are left unvaccinated. MSF is devoted to trying to fill in these cracks, but is often unable to do so because of the prices of the PCV.

Millions of people around the world "are left out of global solutions," Elder said, lamenting that "there is no global mechanism."

Elder says investing in vaccinations is one of the wisest things a nation can do, from a public health perspective. "If you are preventing a disease, it's much better than having to treat it," she explained. It is much cheaper too.

The lowest global price for the PCV is currently somewhere around $10, Elder said, noting "global prices of vaccines are very opaque."

MSF says companies like Pfizer and GSK have instituted a tiered pricing system, but have provided little information about how exactly that system works.

"There is very scant price data," Elder explained. "It's a business strategy of shrouding everything in secrecy." Because of the secrecy surrounding the pricing, different parties do not know what others are paying for the same vaccine.

When prices are discussed, companies often post how much they charge for each dose. This downplays the cost of full immunization, as each child needs three doses to be fully protected.

As a public, tax-funded institution, the Central of Disease Control posts the price that the U.S. pays for each dose of the PCV: $116. Given the U.S. recommends an extra dose per child, this means the government actually pays $464 for each child to be fully immunized, leaps and bounds above the lowest global price.

Commenting on this, Elder said the U.S. government is paying "grossly inflated prices."

MSF said it wanted to "catch up" the children up to age 5 who did not receive their full vaccination. But, because the price was too expensive for the organization, MSF had to reduce the maximum age to 2.

Other countries have made similar complaints. At the World Health Assembly in 2015, more than 50 countries spoke out about high vaccine prices, according to MSF.

The companies themselves, however, argue they cannot reduce the prices any lower.

Salon reached out to Pfizer, requesting a response to MSF's criticisms. The company replied saying "Effective immunization programs require a multi-faceted approach to balance funding, affordability, quality, infrastructure and security of supply while ensuring sustained engagement of all key partners."

"Pfizer works with many partners globally including Gavi, the Vaccines Alliance, UNICEF, and others, to provide access to our vaccines, including providing Prevenar 13 to the world's poorest countries at the lowest price available," a company spokesperson continued. "We also provide Prevenar 13 for use in humanitarian settings where alternate pathways to access do not currently exist."

Salon also reached out to GSK. A spokesperson for the British pharmaceutical company said: "Many of our available vaccines are advanced and complex and require significant upfront capital investment to make and supply."

"For Gavi-eligible countries, we are providing this vaccine at a deeply discounted price," the spokesperson added. "At this level, we are able to just cover our costs. To discount it further would threaten our ability to supply it to these countries in the long-term. Nevertheless, we continue to look at ways to reduce production costs and any savings we make we would pass on to Gavi."

GSK pointed to a Q&A sheet it has on its website responding to MSF's allegations, in which the company stresses that it must balance "our social obligations with creating value for our investors." GSK adds, "Providers of the capital which enables investment in R&D expect a return on their investment."

MSF argues otherwise. The humanitarian organization claims the companies can lower the prices, as they are still profiting off of the vaccine, and "revenues are only increasing." MSF also pointed out that, even if the prices the companies offered to Gavi only just cover their costs, the humanitarian organization still does not have access to those prices.

The humanitarian organization has not recently purchased vaccines from Pfizer, because it says the company's prices are too high. MSF does note that it has gotten some vaccines donated from both Pfizer and GSK, but says it does not want to rely on charity, because it is unsustainable. Elder emphasizes that the humanitarian organization cannot base a reliable vaccination program on the whims of donors.

"It is abysmal that there is not a global solution," Elder said, adding "It shouldn't be a charity; it should be a long-term solution."

"The public would be flabbergasted," were they to know about dysfunctional the system is, Elder said. "We need a lot more public support."