"Sexism has nothing to do with it": Camille Paglia on Hillary Clinton, Gloria Steinem -- and why New Hampshire women broke for Bernie Sanders 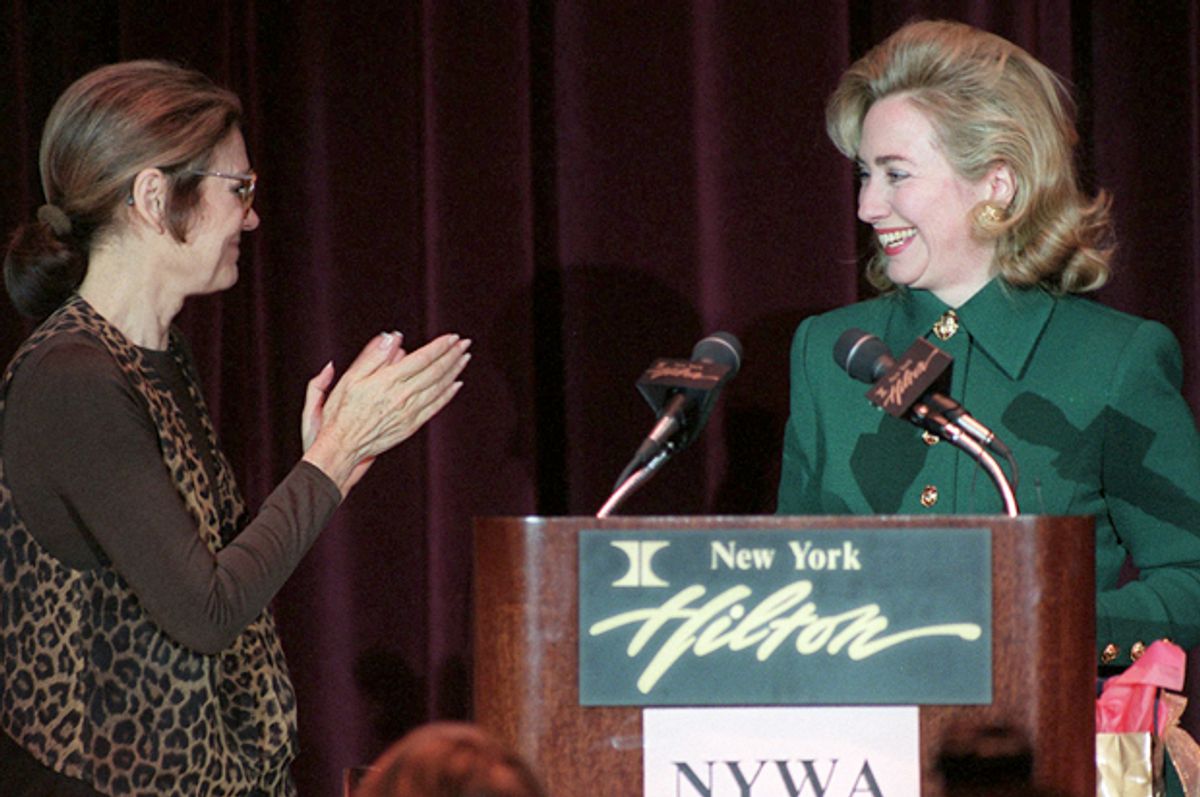 Camille Paglia's incisive and iconoclastic writing on politics and pop culture has been part of Salon's fabric from the beginning. Her always-provocative column appeared here regularly between 1995 and 2001, then once more from 2007 through 2009. We're thrilled to announce that she will join us here again, on a biweekly basis, to discuss the presidential race, the culture world, and everything in between. (If you missed her last story for Salon on Hillary Clinton and feminism, you can catch up here.) Once again, Camille welcomes debate and discussion with Salon readers, and as she did in earlier incarnations of this column, will take answer your questions here. Send them to askcamille@salon.com.

With Bernie Sanders’ thrilling, runaway victory over Hillary Clinton in the New Hampshire primary, the old-guard feminist establishment in the U.S. has been dealt a crushing blow.

Despite emergency efforts by Gloria Steinem, the crafty dowager empress of feminism, to push a faltering Hillary over the finish line, Sanders overwhelmingly won women’s votes in every category except senior citizens. Last week, when she told TV host Bill Maher that young women supporting the Sanders campaign are just in it to meet boys, Steinem managed not only to insult the intelligence and idealism of the young but to vaporize every lesbian Sanders fan into a spectral non-person.

Steinem’s polished humanitarian mask had slipped, revealing the mummified fascist within. I’m sure that my delight was shared by other dissident feminists everywhere. Never before has the general public, here or abroad, more clearly seen the arrogance and amoral manipulativeness of the power elite who hijacked and stunted second-wave feminism.

The next day, Hillary was accompanied on the campaign trail by former Secretary of State Madeleine Albright (a Bill Clinton appointee), who proclaimed, to Hillary’s laughter and applause, “There’s a special place in Hell for women who don’t help other women.” Waspishly policing the earth was evidently insufficient for the feminist politburo, who are now barging into the salvation and damnation game.

Never mind that the woman elevated to Christ Redeemer status by Steinem and Albright has a stained and tattered rap sheet five miles long. What genuine principles does Hillary have left, after a public career so light on concrete achievement and so heavy with lies and greed? Yes, she’s been handed job after job, but primarily due to her very unfeminist association with a man. As a senator, she initiated nothing of substance, and as Secretary of State, she stumbled into one disastrous fiasco after another, escalating the destabilization of North Africa and the Mideast.

I enthusiastically support and contribute to Bernie Sanders because he is a man of conviction who speaks from his heart and who does not need paid pollsters and a giant, obsequious, royal staff to tell him what to say or wear every day. He articulates a vision of social justice that should be at the core of the Democratic party, which has become far too cozy with big donors and corporate lobbyists over the past half century. Hillary Clinton, in contrast, is a time-server and trimmer who cynically panders to every audience and who shuffles through policy positions like playing cards.

When and how did Hillary allegedly become a feminist icon, as so many young women evidently think? Her public prominence has always been based not on any accomplishment of her own but on her marriage to a charismatic politician, now in his dotage. Her speech at the United Nations Fourth World Conference on Women in Beijing in 1995 listed the limitations and atrocities suffered by Third World women and children, but her call to “move beyond rhetoric” has lacked a discernible follow-through. Moreover, in a central passage of that speech, every sentence about Hillary’s encounters with needy women began with “I”, unsettlingly prefiguring her over-use of “I” in her current campaign, in contrast to Bernie Sanders’ ego-transcending focus on sparking a populist movement of political reform.

Hillary was attending the Yale Law School while I was a graduate student across the street. In 1970, a sparsely attended feminist conference was held at the Law School, featuring well-known figures like Kate Millett and Naomi Weisstein. If Hillary was there, she did nothing to stand out. It was at that conference that I realized that second-wave feminism, then barely three years old, was already going off the rails. For example, the radical lesbian Rita Mae Brown said to me, “The difference between you and me, Camille, is that you want to save the universities and I want to burn them down.”

I have written elsewhere about my many clashes with early feminists—such as a near-fistfight with the New Haven Women’s Liberation Rock Band over my fervent love of the “sexist” Rolling Stones or a rancorous confrontation about the very existence of sex-hormones with women’s studies professors at an Albany restaurant. It was precisely because of the borderline lunacy of so many of those women that I became a fan of Gloria Steinem from the moment she appeared on the national scene.

With her chic aviator shades, hip-huggers, and flowing, streaked-blonde hair, the telegenic Steinem normalized the public image of feminism and made it palatable to a vast mainstream. She projected steadiness and cordiality and presented feminist goals as utterly reasonable. As co-founder of Ms., she created the first glossy-page feminist magazine sold on newsstands. Its title was also a major contribution to the English language, which lacked an honorific for women that did not signal marital status.

In the early 1970s, when TIME magazine asked for candidates for the first woman president, I mailed in a flowery nomination for Steinem, whom I predicted would emerge, “when age has dimmed her beauty,” as an authoritative wise woman, honored by all. Given this background of respect and admiration, I was dismayed by the direction that Steinem’s career took. Ms. magazine became ideologically locked, refusing to permit open debate about numerous urgent issues, such as the hasty, unscholarly construction of women’s studies programs, which irrationally excluded all study of biology. My own pro-sex wing of feminism was completely shut out of Ms.

Steinem colluded in the male-bashing momentum of feminism when she declared, “A woman needs a man like a fish needs a bicycle.” Her honeyed, snide, and condescending tone about men became the feminist house style. Childless, she helped demote stay-at-home moms to second-class status. She was instrumental in inflaming an important issue, abortion, to so fanatical a degree that it drove away tens of thousands of potential recruits to feminism—women who happened to have moral objections to abortion based on religious faith.

Steinem and the leaders of the National Organization for Women allowed their own partisan agenda to distort the true universality of feminism. They became backstage secret agents for the Democratic party. Steinem was caught in blatant hypocrisy when she gave Bill Clinton a free pass for his gross violation of fundamental sexual harassment principles in inducing a young intern, Monica Lewinsky, to service him in the offices of the White House.

The revolt of pro-sex feminists against the feminist establishment began with lipstick lesbians in San Francisco in the late 1980s and spread nationwide by the 1990s. I came into open conflict with feminist leaders after my first book, Sexual Personae, which had been rejected by seven publishers, was released by Yale University Press in 1990. Steinem, who obviously hadn’t bothered to read it, compared that 700-page tome about literature and art to Hitler’s Mein Kampf and said of me, “Her calling herself a feminist is sort of like a Nazi saying they’re not anti-Semitic.” That’s the way the feminist establishment worked—the automatic big smear.

For nearly 25 years, Hillary Clinton, with her simmering subtext of contemptuous bitterness about men, has been pushed along and protected by a host of powerful women journalists in print and TV, Steinem chums or sympathizers who have a lot to answer for. Charmed by Hillary in their exclusive dinners and private chitchats, they encouraged her presidential ambitions. But after two national campaigns, it should be obvious that Hillary has no natural instinct or facility for understanding and communicating with the public on the scale that the presidency demands. Sexism has nothing to do with it.