Trans-Pacific Partnership: Written by and for the rich to further enrich themselves at our expense

Don't be fooled by the reports gushing that TPP will increase real incomes in the U.S. They don't mean your income 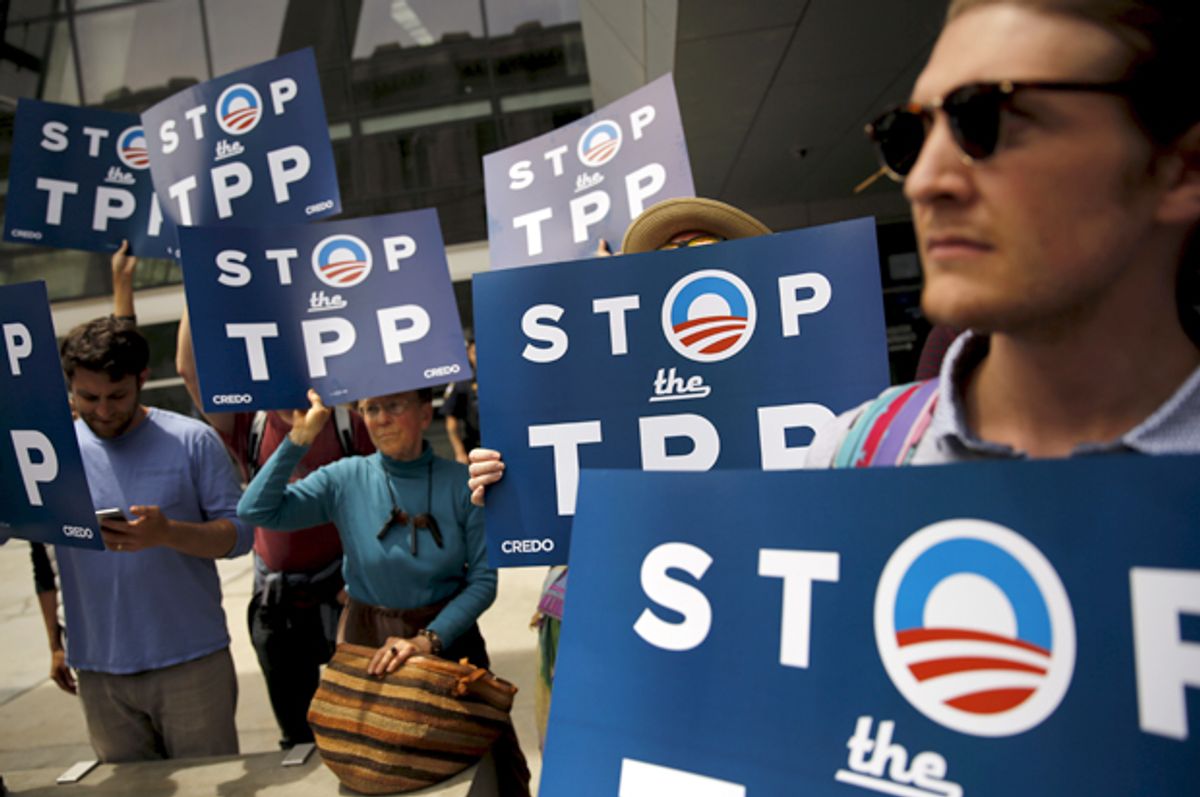 A protest against the Trans-Pacific Partnership at the Federal Building in San Francisco, California, June 9, 2015. (Reuters/Robert Galbraith)
--

The basic problem facing the corporate and political powers that want you and me to swallow their Trans-Pacific Partnership deal is that they can't make chicken salad out of chicken manure.

But that reality hasn't stopped their PR campaign, pitching their "salad" as good and good for you! For example, a recent article touted a study blaring the happy news that TPP will increase real incomes in the U.S. by $133 billion a year. Even if that were true (and plenty of other studies show that it's not), it's a statistic meant to dazzle rather than enlighten, for it skates around the real bottom line for the American public: An increase in income for whom?

In the past 15 years or so, and especially since 2008, it's been made perfectly clear to the workaday majority of people that the corporate mantra of "income growth" benefitting everyone is a deliberate lie. Practically all of the massive annual increases in U.S. income, which every worker helps produce, now gushes up to the richest 1 percent, with millionaires and billionaires (the richest 10 percent of 1-percenters) grabbing the bulk of it.

Economists have a technical term for this: "stealing." TPP is written specifically to sanction and increase the robbery of the many by the world's moneyed few, including provisions that give additional incentives to U.S. manufacturers to ship more of our middle-class jobs to places such as Vietnam with wages under 65 cents an hour (or around $155 a month).

The article opened with this sunny headline: "Trade Pack Would Lift US Incomes, Study Says." Sounds like a dandy deal! But wait, a study by whom? Four paragraphs down into the story, we're finally told that this analysis of TPP's impact comes from the Washington-based Peterson Institute for International Economics.

Fine, but who's behind that? We're not told, even though that information is key to understanding the upbeat interpretation of the TPP trade scheme. Readers would likely be less reassured by the positive spin if they knew that the Peterson Institute is largely funded by the major global corporations that would gain enormous new power over consumers, workers, farmers, our environment and the very sovereignty of America if Congress rubber stamps this raw deal. In fact, many of the multinational giants financing the institute were among the 500 corporate powers that were literally allowed to help write the 2,000-page agreement they're now trying to shove down our throats -- including Caterpillar, Chevron, IBM, GE, Deere & Company, General Motors and the U.S. Chamber of Commerce.

Oh, and what about this Peterson guy -- is he some sort of unbiased scholar? Hardly. Pete Peterson is a Wall Street billionaire, one of the 400 richest people in the country, and the founding chairman of his eponymous institute. He's also a reactionary, anti-government, anti-public-spending ideologue who was Nixon's commerce secretary. Hailed by the establishment as one of "the most influential billionaires in U.S. politics," he uses that influence (and his fortune) to demonize such for-the-people programs as Social Security and to push policies to further enrich and enthrone the billionaire class over the rest of us. TPP would be his ultimate political coup against us commoners.

We don't need any institute to tell us who would benefit from TPP. All we need to know is that it was negotiated in strict secrecy with global corporate elites while we consumers and workers were locked out. Remember, if you're not at the table, you're on the menu.

Don't be bamboozled by glittery studies. TPP was written by and for the superrich to further enrich themselves at our expense, exacerbating the widening gulf of inequality in America. For information and action tips, go to Public Citizen's Global Trade Watch at www.citizen.org/trade.