Kissinger oversaw policies that led to millions of deaths. Sanders' break with his destructive legacy is crucial 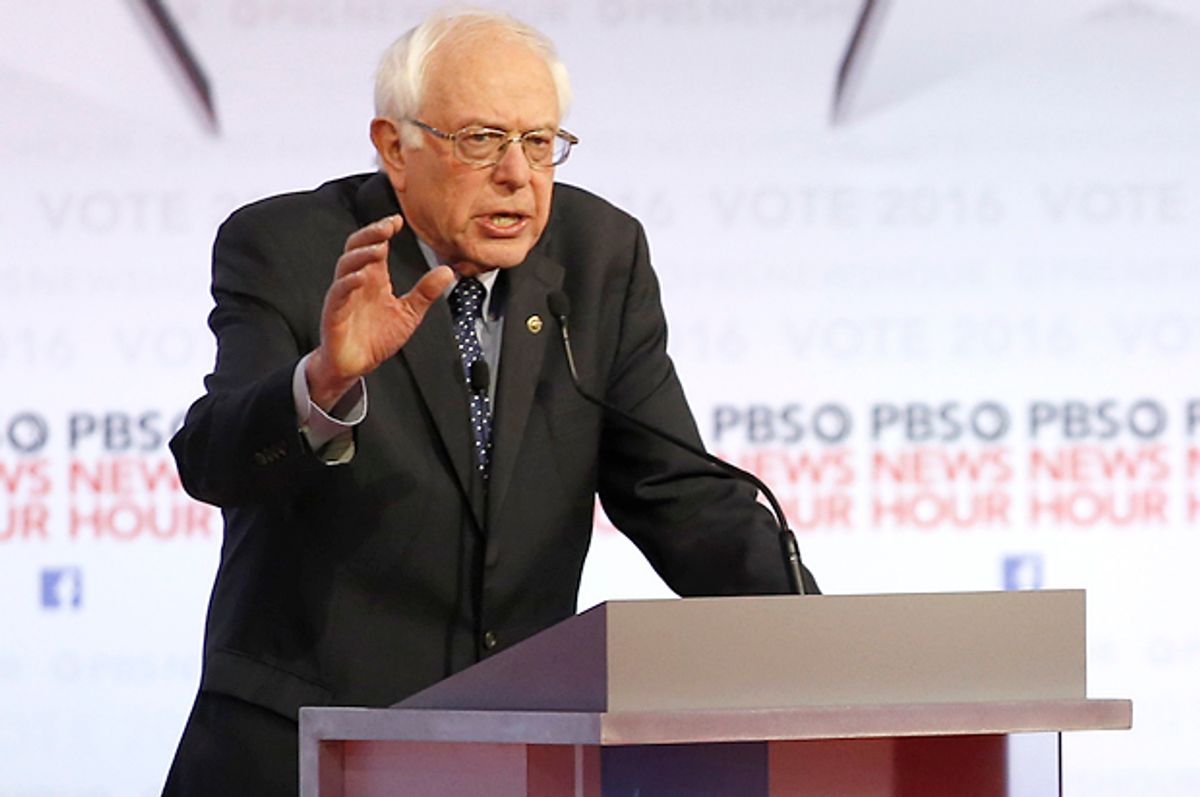 Bernie Sanders, at the Democratic debate at the University of Wisconsin-Milwaukee, Feb. 11, 2016, in Milwaukee. (AP/Morry Gash)
--

"I am proud to say that Henry Kissinger is not my friend. I will not take advice from Henry Kissinger," Bernie Sanders declared in the Milwaukee presidential debate Thursday night.

"Where the secretary and I have a very profound difference," Sanders explained, "in her book and in this last debate, she talked about getting the approval or the support or the mentoring of Henry Kissinger. Now, I find it rather amazing, because I happen to believe that Henry Kissinger was one of the most destructive secretaries of state in the modern history of this country."

These are some of the most important words Sanders has ever uttered about foreign policy. And they show he is appreciably better on the issue than Hillary Clinton, in all the ways that matter.

The historical facts make it clear that Sanders is absolutely correct; Kissinger was, hands down, one of the most destructive secretaries of state in the modern history of the U.S.

In the previous Democratic presidential debate, on Feb. 4, Clinton bragged that she's supported by the destructive former secretary of state. "I was very flattered when Henry Kissinger said I ran the State Department better than anybody had run it in a long time," she said.

Salon detailed at the time how Kissinger is an accused war criminal who oversaw policies that led to the deaths of millions of people. Kissinger met with Nazis who wanted help overthrowing West Germany's left-leaning government; said "we will be friends with" the Khmer Rouge, who he admitted "are murderous thugs, but we won't let that stand in the way"; supported far-right Latin American dictatorships in their campaign of systematic state terrorism against left-wing movements; oversaw the violent coup that toppled Chile's democratically elected socialist government and installed a far-right dictator who killed, tortured and disappeared countless people; promoted a "madman" strategy in the U.S. war in Vietnam, in which approximately 3 million Vietnamese were killed; and more.

It is hard to overstate the severity of the crimes overseen by Kissinger, who infamously boasted "The illegal we do immediately; the unconstitutional takes a little longer."

New York University historian Greg Grandin, one of the leading specialists on Kissinger, has written that "Kissinger’s policies resulted in at least 4,124,000 civilian deaths, probably many times that number of wounded and refugees – and that doesn’t include Kissinger’s victims in Vietnam — a war that he (and Nixon) helped prolong for five years when they sabotaged 1968 peace talks — Laos, or Argentina, Uruguay, the Middle East and Persian Gulf, at the hands of Kissinger’s partners, such as the Shah and the Saudis."

In his landmark book on the former secretary of state, "Kissinger's Shadow," Grandin reveals how Kissinger ramped up violent U.S. militarism, pouring gasoline on the fire of the Cold War.

Kissinger's soi-disant "realist" foreign policy (the so-called "realism" of which Grandin calls into question), which remains influential today, is little more than ruthless realpolitik that deems the imperial projection of American military power beneficent by virtue of it being American.

"And yet Clinton continues to call his name, hoping his light bathes her in wisdom," the historian says.

Clinton does much more than just continue to call his name, however. Salon has exposed how emails released from Clinton's time as secretary of state for the Obama administration reveal close ties to Kissinger. One of the emails suggests that Clinton saw Kissinger as her role model. Another is an intimate handwritten message in which Kissinger tells Clinton "I greatly admire the skill and aplomb with which you conduct our foreign policy."

Salon also noted how, in her glowing review of a new Kissinger book in The Washington Post in September 2014, Clinton revealed "Kissinger is a friend, and I relied on his counsel when I served as secretary of state." She added, "He checked in with me regularly, sharing astute observations about foreign leaders and sending me written reports on his travels."

Clinton continues, still today, to laud Kissinger's record. In her review, she proclaimed that Kissinger's notoriously belligerent foreign policy "largely fits with the broad strategy behind the Obama administration's effort." And, borrowing Kissingerian language, Clinton said she yearns for "sustaining America's leadership in the world."

Hillary, an unapologetic hawk, has flaunted her bellicosity in the debates. The fact that she continues to do so, and continues to invoke the name of Kissinger, just shows how much of an ideological imperialist Clinton is. She truly, wholeheartedly believes in the supposed benevolence of U.S. empire and the forceful projection of American military power.

Sanders frequently reminds voters that Clinton voted for the U.S. invasion of Iraq. But she did not only support the war, which the U.N. said was illegal; she went above and beyond, and, echoing Bush administration propaganda that many other Democrats rejected, accused the avowedly secular dictator Saddam Hussein of having ties to al-Qaeda, as journalist Doug Henwood documents in his book "My Turn: Hillary Clinton Targets the Presidency."

This is just one of Clinton's hawkish policies, among many. She also led the catastrophic NATO bombing of Libya, which plunged the country into chaos and created a vacuum largely filled by extremist groups like Ansar al-Sharia and ISIS, famously remarking "We came, we saw, he died" after Muammar Qaddafi was killed. She oversaw the U.S. drone war, in which targets are assassinated without charge or trial. She previously defended torture. She even said in her presidential campaign in 2007 she would consider dropping nuclear bombs on militants in South Asia.

Sanders himself is no dove. Although he has opposed the more egregious cases of American militarism, he has also supported some disastrous foreign policy decisions, including the NATO bombing of Yugoslavia and the U.S. war in Afghanistan.

In the debate, Sanders also understated the crimes of Winston Churchill, who he euphemistically said "was kind of a conservative guy in many respects." The British leader was a deeply racist warmonger who claimed "the Aryan stock is bound to triumph," said "I am strongly in favour of using poisoned gas against uncivilised tribes" and boasted that imperial Britain had fought "a lot of jolly little wars against barbarous peoples."

These problems aside, nevertheless, one thing is clear: Sanders' record is nowhere near as bloody as Clinton's.

An insidious discourse has recently developed in the media, nevertheless. The narrative, promulgated almost without exception by Clinton's staunch supporters, is that Sanders is "weak" and "inexperienced" on foreign policy, whereas Clinton is a virtuosa.

Pundits like Michael A. Cohen argue "Sanders flunks on foreign policy," claiming the left-wing senator is not aggressive enough toward Russia, Iran and North Korea. Cohen is a liberal columnist who called for the U.S. to bomb Syria; says Sanders' "fixation" on a war that killed at least 1 million Iraqis, destabilized the region and birthed ISIS is "tiresome"; and insists journalists must provide evidence that unsubstantiated rumors spread by the State Department are not true.

This discourse subtly normalizes the ludicrous notion that the more belligerent a candidate is, the more forceful and warmongering their approach is, the more skilled they are on foreign policy — this is precisely what makes it so insidious. Just like "tough on crime" rhetoric (and it must be mentioned that Hillary and Bill Clinton, as architects of racist mass incarceration, have a long history of boasting about their "tough on crime" policies), this narrative presupposes that those who oppose U.S. wars, which are benevolent merely by virtue of their existence, are "weak" and "inexperienced" on foreign policy.

The whole hackneyed notion, rehashed over and over again, that Clinton is "experienced" and Sanders is not is patently preposterous, and frankly dishonest.

For starters, it must be pointed out, Obama was not experienced at all on foreign policy in the 2008 election, but Sen. John McCain sure was. Clearly then, according to the argument Clinton's supporters are putting forward today, Americans should have voted for McCain.

Moreover, the whole premise is absurd. Sanders has served in Congress for more than 25 years. What, so, unlike Clinton, he didn't lead NATO's destruction of a sovereign, oil-rich, Muslim-majority North African nation; oversee the secretive U.S. drone war that eviscerates Pakistani grandmothers out picking okra with their grandchildren; or systematically derail U.N. action on Israeli war crimes in Gaza? That should be seen as what it is: not a bad thing, but a good thing.

Sanders' distancing himself from Kissinger on foreign policy shows just how much better he is on the issue.

The cornerstone of intelligentsia foreign policy, from both the Democrats and Republicans, for decades (and beyond) has been that the projection of U.S. and NATO military power is inherently good, because it is the U.S. and NATO doing it.

By distancing himself from this destructive, bloody legacy, Sanders is demonstrating just how much wiser he is.