That was the ugliest Dem debate yet: Bernie & Hillary pull out all stops as the primary enters uncharted territory

Just days after Sanders ran away with New Hampshire, the two candidates met for a rhetorical bare-knuckle brawl 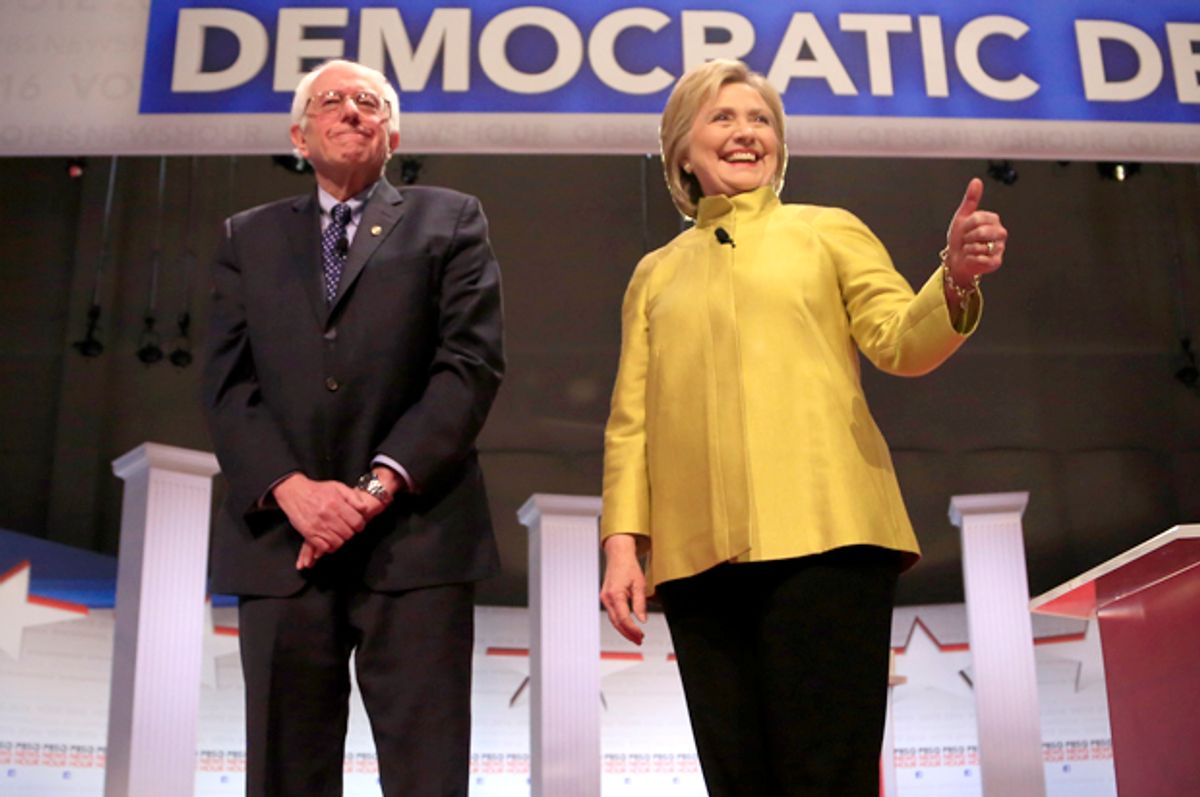 The entire 2016 presidential campaign has been dominated by the unexpected, so we probably should have seen it coming that genteel PBS would wind up hosting a debate with some of the most bare-knuckle brawling so far between Hillary Clinton and Bernie Sanders.

Thursday's event was held, somewhat randomly, in Wisconsin—which doesn't have a primary until April—but both Clinton and Sanders had their minds on Nevada and South Carolina, the two upcoming states on the electoral calendar. They each find themselves in moments of considerable risk. Clinton has been steadily watching the zeitgeist of the race slip away from her, and has yet to find a way to reframe her campaign in any way that can inspire people. Sanders is at the indisputable high point of his entire political life, but he's about to be put through the wringer in ways he's likely never experienced before. The debate felt like a preview of what is swiftly going to become an extremely negative race.

Clinton's mismatch with a large portion of the Democratic electorate was evident in her exchange with Sanders on health care early in the debate. While Sanders said that there was no reason why the United States couldn't do what every other industrialized country does and guarantee health care to all its people, Clinton cautioned that pushing for a single-payer plan would be divisive and disruptive, and that it was better to build on the Obamacare model.

This is a perfectly intellectually defensible argument, but it puts Clinton in the unenviable position of throwing cold water on people's legitimate moral outrage about the injustices of the American healthcare system. What's more, for all that Clinton warns about the political viability of Sanders's plans, anybody who's watched President Obama repeatedly strike out with a Republican Congress knows that her own plans don't stand much of a chance either. There are surely people who are saying to themselves that, if they can't get a ton of change with either candidate, they should go for the one who pledges to champion their dreams instead of hedging on them.

Clinton is in something of an impossible place here. Quite simply, she is who she is. She has to find some way of pushing through the Sanders energy and convincing people either that she can dream too or that her deep comfort with the American political establishment will wind up benefiting them.

Sanders is entering uncharted territory, and it showed. He was both more aggressive and more rattled than he's ever been. He launched a newly forceful riposte to Clinton on foreign policy, complete with an exquisitely brutal takedown of her friend Henry Kissinger. (Honestly, if the entire debate was about the horrible things Henry Kissinger has done, that would have been wonderful. Clinton must have been thinking what planet she'd wandered into. Even in the depths of her campaign against Barack Obama, he would never have tried to go after Kissinger like that.) Sanders is still somewhat garbled on foreign policy—he even praised Winston Churchill at length—but it was good to see him trying to work something new out.

Yet he was also visibly unsettled when Clinton called him out for some of his past criticisms of Obama. Obviously, this is set to be an even more central part of her anti-Bernie strategy, and his answer was a bit all over the map.

It's clear where this race is headed. Clinton helpfully telegraphed where she wants to take it in her closing statement, saying, "I am not a single issue candidate, and I do not think we live in a single issue country." She is making two very big bets: that the various social constituencies that make up the Democratic base will wind up spurning Sanders in favor of her, and that her closeness to Obama will trump the clear currents of dissatisfaction with the Obama presidency that have rippled through the contest so far. Sanders is going to try and ensure that she loses both bets.