Inequality leads to authoritarianism: Why Trump is acting like "a generalissimo with a giant brass eagle on his hat"

Inequality, bad trade deals, a system rigged for the rich: How's an autocratic billionaire positioned as a savior? 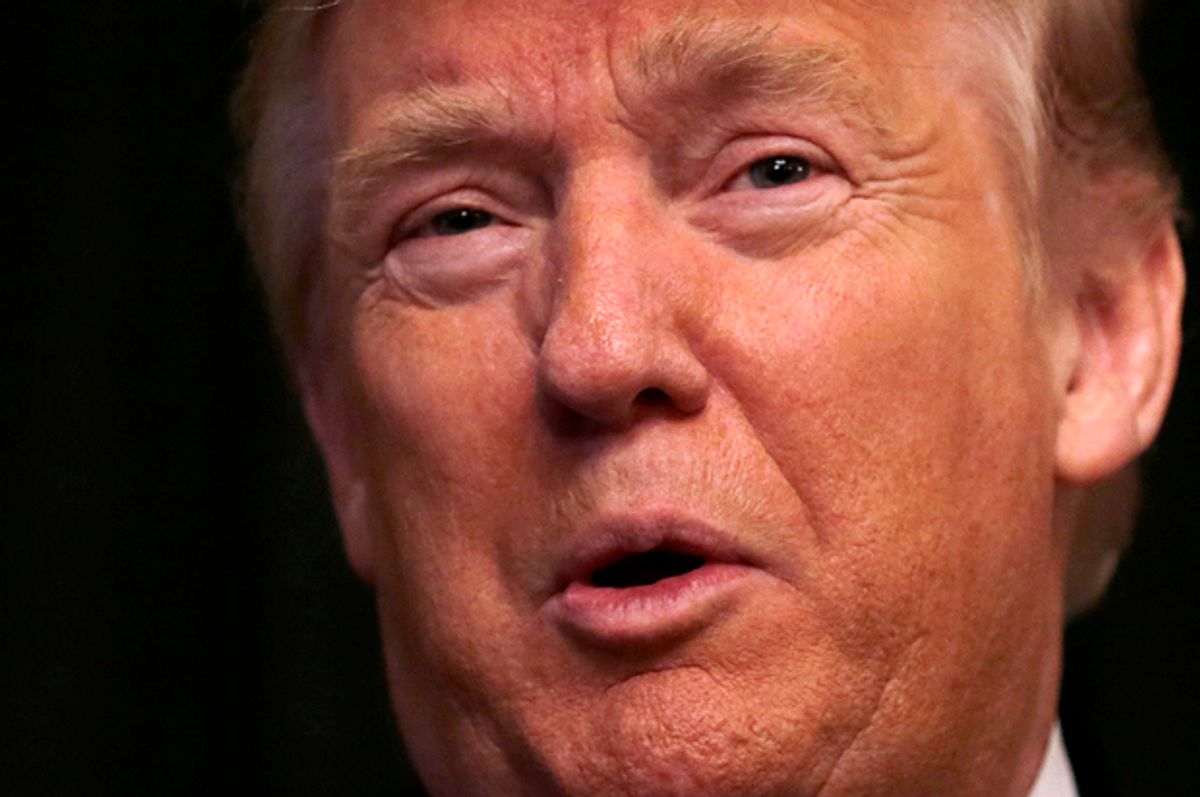 Donald Trump stepped into the gymnasium at New Hampshire’s Plymouth State University to the opening riff of The Beatles’ “Revolution.” Never mind that it’s a song mocking the pretensions of self-styled revolutionaries. Donald Trump does not do nuance. Donald Trump does bold, garish strokes. The song is loud and it’s got the word “revolution” in it. That’s what Donald Trump wants.

It was the day after the last debate before the New Hampshire primary, but Trump didn’t want to brag about his performance. He wanted to talk about how “rich donors and special interests” had hogged all the tickets, leaving college students outside in the snow. The crowd, waving signs that read “The Silent Majority Stands With Trump,” booed loudly.

“I look at these people who have tremendous money,” Trump said. “They’re wasting their money. They should give it to the vets. It’s the special interests: people who represent insurance companies, oil companies, drug companies. I’m their worst nightmare, because I’m not taking their money. I’m richer than they are. I don’t need your money. I need your vote.”

Live and in person, Trump is reminiscent of Regis Philbin: an overexcited New Yorker riffing off the top of his head and emphasizing his points with broad hand gestures: the OK sign, the “whaddya-whaddya” open-palmed shrug. Like a lot of people in the crowd, I was there for the Trumpertainment, hoping the most uninhibited performer in American politics would threaten to shoot someone, or make a pussy joke about one of his enemies in the media or the Republican primary. Seeing Trump is like seeing Marilyn Manson, circa 1995: you’re not there for the music.

But then Trump began talking about the Ford Motor Company’s plan to build a plant in Mexico, and suddenly, I not only understood why he’s leading the Republican primary field by double digits, I understood what this entire presidential campaign is about.

This is the first true post-Great Recession election. (2012 was a referendum on Obama.) A lot of older people have realized they’re never going to make as much money as they did before the economy collapsed, and a lot of young people have realized they’re never going to make money, period. Trump and Sen. Bernie Sanders are both drawing their support from voters who are angry about economic inequality and blame it on bad trade deals and a political system rigged in favor of the wealthy.

“I’m never going to agree with Bernie Sanders on much, but I agree with him on two things,” Trump said. “Trade – on trade, he said we’re being ripped off. He just doesn’t know how much. I know how much. The difference is, I can fix the trade. He can’t do it; he doesn’t know how. He’s right with Hillary, because she’s receiving a fortune from a lot of people. There’s no way she can tell Ford, ‘Don’t move.’ She can’t do it. I’m not going to let that happen. We have power, if we want to use it. They’ll call me and I’ll say, ‘Explain how it’s good. You’re closing up in Michigan and a lot of other places to build in Mexico. They’ll say, ‘Well, it’s not good, but we want to build this.’ And I’ll say, ‘That’s OK, you can build it, but we are going to charge you a 35 percent tax for every car, every truck you bring to the U.S.’ Within 48 hours, they’re going to say, ‘We’re going to build the plant in the United States.’”

I grew up in Michigan in the 1980s. A generation before the Great Recession, we suffered through the recession that transformed the Arsenal of Democracy to the Rust Belt. Auto plants laid off tens of thousands of workers. Unemployment hit 16 percent. We needed an enemy to blame, so we blamed the Japanese. In a suburb of Detroit, a Chinese-American was beaten to death in a bar brawl by a Chrysler foreman who told him, “It’s because of you we’re out of work.” In Flint, a UAW fundraiser charged five dollars to whack a Toyota with a sledgehammer. A wag grafittoed “Assholes Buy Jap Cars” on a highway overpass, and a T-shirt with a map of Japan insisted “Two Bombs Were Not Enough.”

Globalization spawning xenophobia? Been there, seen that. The Great Recession of the late 2000s blew it up from a regional to a national phenomenon, and Trump has made it the basis of his campaign, offering his followers alien villains to blame for their economic problems. He went on to attack the Trans Pacific Partnership, and accuse China and Japan of using “currency manipulation” to undermine American manufacturing. Between his calls for protectionism and his Japan-bashing, Trump sounded like a United Auto Workers local president. Michigan was also the heartland of the Reagan Democrats: hawkish, economically liberal, socially conservative suburban white blue-collar workers who today seem like a perfect audience for Trump’s message.

“I’m a free trader, but you can only have free trade if something’s fair,” Trump said. “I have a rich friend who bought earth moving equipment from Komatsu instead of Caterpillar. He said, ‘Because they’re so cheap. They devalued the yen. I had to do it; I had no choice.’”

“WE WANT JOBS!” a man bellowed during the speech.

Trump’s “Make America Great Again” slogan appeals to the nostalgia of Baby Boomers who grew up in a nation of few immigrants, full employment, and no economic competition from overseas. He’s promising to use his business acumen and the force of his personality to restore America’s economic hegemony. Trump’s message is that we can’t win unless they --immigrants and foreign nations -- lose.

Sanders, on the other hand, is arguing that we can’t win unless we’re all winners. Instead of looking back to the 1960s, he proposes to build a social welfare system based on those nations we used to dominate economically; it’s going to happen in this century, even if he’s not the president who makes it happen.

The political establishment, in both parties, has spent the last 40 years undermining the middle class, and this is result: the presidential candidates exciting the most energy among the electorate are a demagogue and a socialist. Trump is not a conservative who believes in free markets and traditional values: he’s a populist who has more in common with someone like Michael Moore than with the rest of the Republican field. Sanders is not a liberal, proposing incremental reforms to improve the plight of the needy. He’s a radical who wants to completely remake the social compact between the government and the people. (One of his campaign songs is Tracy Chapman’s “Talkin’ Bout a Revolution.”) They represent extremes because when the economic middle disappears, the political middle follows. That’s a principle as old as Aristotle, who wrote in his treatise Politics:

“Those who have too much of the goods of fortune, strength, wealth, friends and the like are neither willing nor able to submit to authority. The evil begins at home; for when they are boys, by reason of the luxury in which they are brought up, they never learn, even at school, the habit of obedience. On the other hand, the very poor, who are in the opposite extreme, are too degraded. So that the one class cannot obey, but can only rule despotically; the other knows not how to command and must be ruled like slaves. Thus arises a city, not of freemen, but of masters and slaves, the one despising, the other envying…A city ought to be composed, as far as possible, of equals and similar; and these are generally the middle classes.”

So in the 4th century B.C., Aristotle predicted the rise of Donald Trump: a recently-deposed middle class reacting to its new impoverishment by agitating for a strongman to take the reins of government. If Trump is carrying himself like a generalissimo with a giant brass eagle on his hat, it’s because the United States is becoming the sort of country ruled by such men: unequal and oligarchic. The rationale for Trump’s candidacy proves this. He’s arguing that the only one who can save us from the rich is someone even richer.