Hillary could be crushing it, and she's not: Advice from “Scandal”’s Olivia Pope that Clinton desperately needs to hear 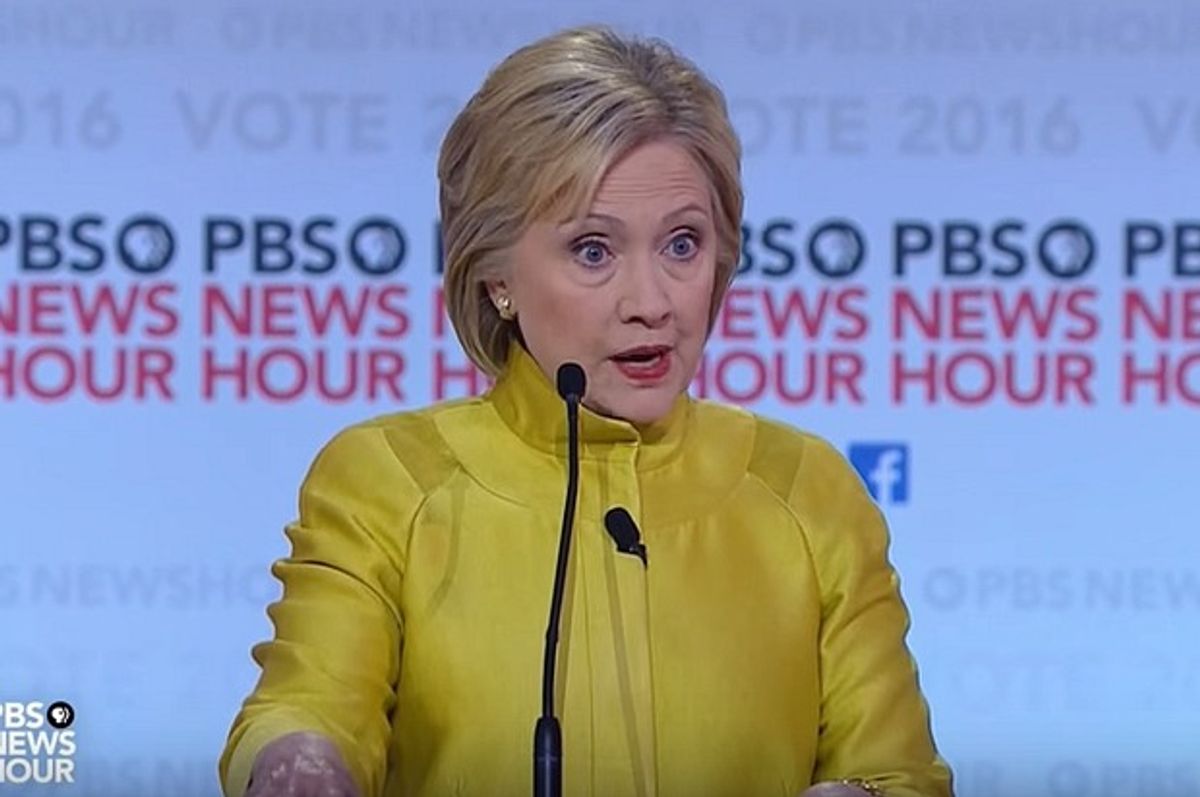 While a real-life former First Lady was arguing her case to the Democratic party at last night’s primary debate in Milwaukee, a fictional one was trying to find her own path to the White House. I’ve written before about the similarities between leading Democratic candidate and former Secretary of State Hillary Clinton and “Scandal”’s Melanie Grant (Bellamy Young)—the latter being a clear homage to the former, with all the clear hindsight of 20 years later. That comparison has only deepened as Clinton began her second attempt at the presidency and Mellie Grant broke with her husband Fitz (Tony Goldwyn) and laid her own ambitions for leadership bare. Like Clinton, Mellie became a senator; like Clinton, she’s now contemplating a run at the White House herself. “Scandal” being in Shondaland, Mellie is of course planning a campaign with her husband’s ex-mistress while he’s still sitting in the Oval Office, but anyway, the bones of the story are still there.

Putting last night’s PBS debate head-to-head with the mid-season premieres of “Scandal” and “How To Get Away With Murder” on ABC is not quite fair to anyone involved; while politics might be happening on the former channel, the real political analysis is happening on the latter. Clinton was at her best yet in the debate last night against Senator Bernie Sanders. She has better talking points than ever, but they didn’t even sound like talking points; she was adept pivoting off of Sanders’ same few criticisms to create an alternate argument for her own actions, and whether or not you agree with her at all, it’s hard to deny how powerful her closing statement was. The last debate, in New Hampshire, was a marginal win for Sanders; this debate was an unequivocal win for Clinton, who even had the support of most of the room by the end of the night. Sanders got as testy and direct in attacking Clinton as he ever has, and both made much anguish out of essentially entirely agreeing with each other.

Indeed, in terms of policy, they mostly broke even. Unlike most of the other debates we’ve seen them in, Sanders and Clinton at this point have gone over their own talking points so much that their criticisms came down to sniping at each other over their motivations over certain votes and specific provisions of larger bills. But their points did what a debate is supposed to do, which was to illustrate the differences in reasoning between the two. Clinton was taken to task for counting former Secretary of State Henry Kissinger as a friend and admirer; Sanders (rightly) all but said that Kissinger is a war criminal. On the other hand, Clinton argued that she tried to listen to what anyone could offer her, in terms of ideas, and then cherry-pick the best ones. She cited relations with China as an example. And a squabble about a 2007 immigration bill portrayed Clinton as ruthlessly practical, while Sanders maintained his ideological purity. It was an instructive array of contrasts.

But in terms of personality, Sanders really lost the night. The candidate stumbled into arguments that made him look dumb, whether that was claiming that race relations would be better under his hypothetical presidency than President Obama’s or criticizing Clinton’s friendship with Kissinger while touting Winston Churchill, President Franklin Delano Roosevelt, and open-mindedness towards Iran. His demeanor did not help. The split-screen PBS used as the candidates debated was merciless, showcasing Sanders as he kept raising his hand to interrupt her and get the attention of the moderators, Gwen Ifill and Judy Woodruff. On her show “Full Frontal,” Samantha Bee joked that it made him look like he was trying to get a waiter’s attention, and in this debate that tic transformed from an affectation to something petty and irritable. Sanders also kept adding an additional response on top of his allotted one so that he could always sound like he had the last word. It wasn’t a good look, and as the night went on, it became a worse and worse look. For her part, Clinton was statuesque in icy composure, fixing him at one point with a dead-eyed stare when he criticized a point of her record that is likely able to freeze the blood.

And yet this debate performance is unlikely to eliminate Sanders from Clinton’s path to the nomination. Last night's episode of “Scandal,” “It’s Hard Out Here For A General,” offers an idea of what it is. Clinton lacks narrative — she lacks something that moves people beyond more than just a vague sense of responsibility. Olivia Pope (Kerry Washington) gives Mellie a piece of advice that would serve Hillary Clinton very well.

Like any good presidential hopeful—especially one trying to see herself as more than a professional appendage to a man—Mellie told Olivia last night that she'd completed a draft of a memoir, into which she poured her hopes and dreams for the country. Olivia read it and delivered her verdict: well-written, intelligent, but “a total bore.” Mellie is a little stunned, but Olivia is stern. It is a book, she says to Mellie, that fairly screams, “I want to be president.” Mellie retorts that she does want to be president. Olivia replies, “Which is why you don’t write a book that screams, ‘I want to be president.’ It’s clichéd. Formulaic. Dishonest.”

At first, it’s a statement that doesn’t make sense. Mellie’s statement is the opposite of dishonest, which makes Olivia’s advice a weird incarnation of reverse psychology. But it encompasses something that is apparent in everything Clinton does, and it’s about attempting to be seen as someone worth believing in. Hillary Clinton is a solid, reliable bureaucrat, and she wants to be the first female president. But that's not really what her campaign is about. In lieu of being about anything else, though, her candidacy has become both entirely about gender and carefully about anything but gender. At the debate, Woodruff and Ifill started a line of uncomfortable and bizarre questioning about whether or not women were obligated to vote for Clinton that played right into this ambiguity. It's a paralyzing dynamic—one that has made Clinton vulnerable to a socialist from Vermont.

Olivia doesn't mention gender, but "Scandal" is historically very cynical about government and politics, and her little lecture to Mellie brings in all of that practical bitterness. Olivia implies that the rules are different for Mellie because she’s female, and feminine ambition isn’t as palatable as male ambition. But more than that, Olivia is instructing Mellie what to make her candidacy be about that isn’t just the failed marriage and the public scandal. Mellie can’t just be the most earnest candidate in the room, or the hardest worker, or the nicest one. She has to build a narrative that rises like a wave and crushes any possible opposition. That's how she wins. And without it, she might find herself in a candidacy a lot like Clinton's, where momentum is hard to find and gender is nearly impossible to talk about.

The title of last night's "Scandal" episode is a reference to Lily Allen’s quasi-feminist, quasi-problematic anthem “It’s Hard Out Here For A Bitch”—the bitch in question being any woman who doesn’t quite follow the rules—and it applies to Mellie and Olivia as much as it applies to the case of the week, about a whistleblowing general who is forced to resign. And maybe it applies to Hillary Clinton, too. It feels like Olivia is giving Hillary Clinton a piece of advice she desperately needs—and saying it in a venue where we, the American people, can all hear it—while on another channel, at the exact same time, Clinton struggles to eke out a rhetorical victory. I wonder if Clinton will hear the call.