Antonin Scalia was the forefather of modern Republican nihilism

Antonin Scalia wasn't just a giant of conservative jurisprudence. He was an architect of right-wing legal extremism 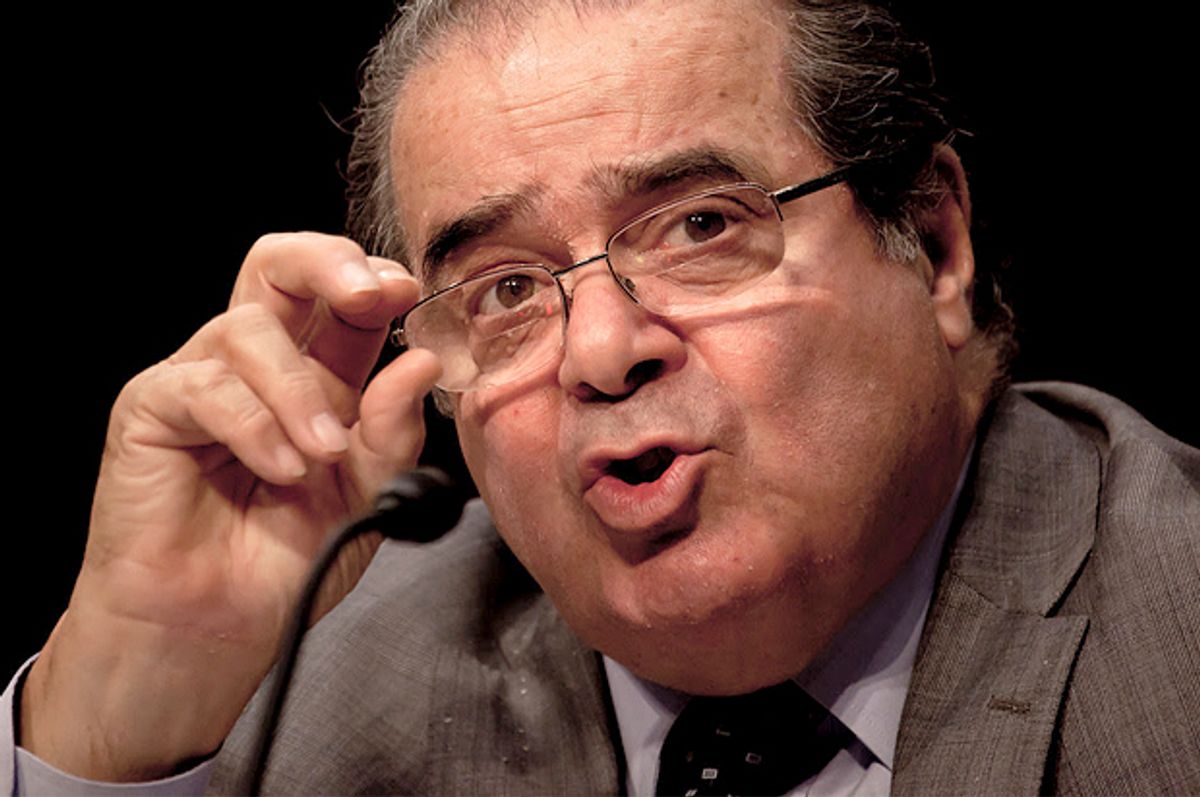 It's ironic, to say the least, that the passing of Justice Antonin Scalia, a man known for the legal doctrine of "originalism," would immediately lead the majority leader of the Senate to declare that no nominee to replace him would be confirmed until a new president is inaugurated in a year's time. The founders would very likely scratch their heads in wonder at Mitch McConnell's odd statement that “the American people should have a voice in the selection of their next Supreme Court Justice, therefore this vacancy should not be filled until we have a new president." They would likely point out that the American people did have a voice in that decision in 2012, when they voted for Barack Obama for a four year term. There's nothing in the Constitution that says after three years the president is no longer authorized to nominate Supreme Court Justices.

Be that as it may, the reality is the Republican Senate is not going to confirm anyone President Obama sends up, and I don't think anyone would imagine otherwise. What's startling about McConnell's statement is the fact that he said it so openly. It's another example of the reckless disregard of political norms, traditions and the rule of law by the modern GOP. In the old days, they would have at least paid lip service to the idea that a president is obligated to nominate Supreme Court justices and the Senate is obligated to fulfill its advise-and-consent role. Sure, they would delay the nomination, but to just announce upfront that they have no intention of following the usual procedure is a new thing. They don't even pretend to care about preserving the integrity of the institution.

Last night in the GOP debate, all the candidates backed up McConnell. It would seem they too believe that even the pretense of normal constitutional processes is no longer necessary. This will be good to keep in mind as they bray incessantly about President Obama's use of executive orders as if they were acts of treason. (By the way, his use of Executive Orders is right in line with all modern presidents, including Republicans.)

But then, if there's one Supreme Court justice who exemplifies this propensity of modern American conservatives to bend the system for partisan ends when needed, it was Justice Antonin Scalia. His legacy as a hardcore legal conservative is second to none, but it will always be over-shadowed by one decision: Bush v. Gore. The Republicans had already begun the process of destroying the integrity of Congress with its partisan witch hunts and the impeachment circus of the 1990s; but if there's one Supreme Court ruling that paved the way for the total abandonment of any pretense of dignified non-partisan adherence to traditions for the sake of preserving the integrity of our institutions in the eyes of the public, it is that one.

Indeed, Justice Scalia may have written the single most fatuous line in Supreme Court history with his brief concurrence in that case:

“The counting of votes that are of questionable legality does in my view threaten irreparable harm [George W. Bush] and to the country, by casting a cloud upon what he claims to be the legitimacy of his election."

Scalia was a very smart man, and he had to know that this would be one of the main decisions for which he was remembered. His willingness to risk his reputation by writing that ridiculous rationale for a nakedly partisan outcome served as an example to conservatives everywhere: Win by any means necessary.

He did not like being reminded of it. When college audiences would ask him about the decision he would usually bellow, "Get over it," which was the standard line the media employed in the wake of the decision in 2000. But in recent years he led the way with another modern Republican tactic, simply denying reality. In 2008 he appeared on "60 Minutes":

"People say that that decision was not based on judicial philosophy but on politics," Stahl asks.

"Gee, I really don't wanna get into - I mean this is - get over it. It's so old by now. The principal issue in the case, whether the scheme that the Florida Supreme Court had put together violated the federal Constitution, that wasn't even close. The vote was seven to two."

In 2012, he said the same thing at Wesleyan University:

At the end of the speech, Scalia took questions from the audience. One person asked about the Bush-Gore case, where the Supreme Court had to determine the winner of the election.

“Get over it,” Scalia said of the controversy surrounding it, to laughter from the audience.“

It was a long time ago, people forget…It was a 7-2 decision. It wasn’t even close,” he said.

The problem is that he was not telling the truth. As Ian Millhiser at Think Progress explained:

Bush v. Gore was not a 7-2 decision — and indeed, Scalia could tell this is true by counting all four of the dissenting opinions in that case. Although it is true that the four dissenters divided on how the Florida recount should proceed — two believed there should be a statewide recount of all Florida voters while two others believed a narrower recount would be acceptable — not one of the Court’s four moderates agreed with Scalia that the winner of the 2000 presidential election should effectively be chosen by five most conservative members of the Supreme Court of the United States.

Justice Scalia had a long illustrious judicial career. He was a giant among the modern conservative legal theorists on the right.  But he was also one of the fathers of the modern conservative movement's "you can believe me or you can believe your lying eyes" school of politics. If the 2016 Republican presidential primary is any example, his political legacy is secure.