Calling Cruz a "nasty guy," Trump says "now I know why he doesn't have one endorsement from his colleagues" 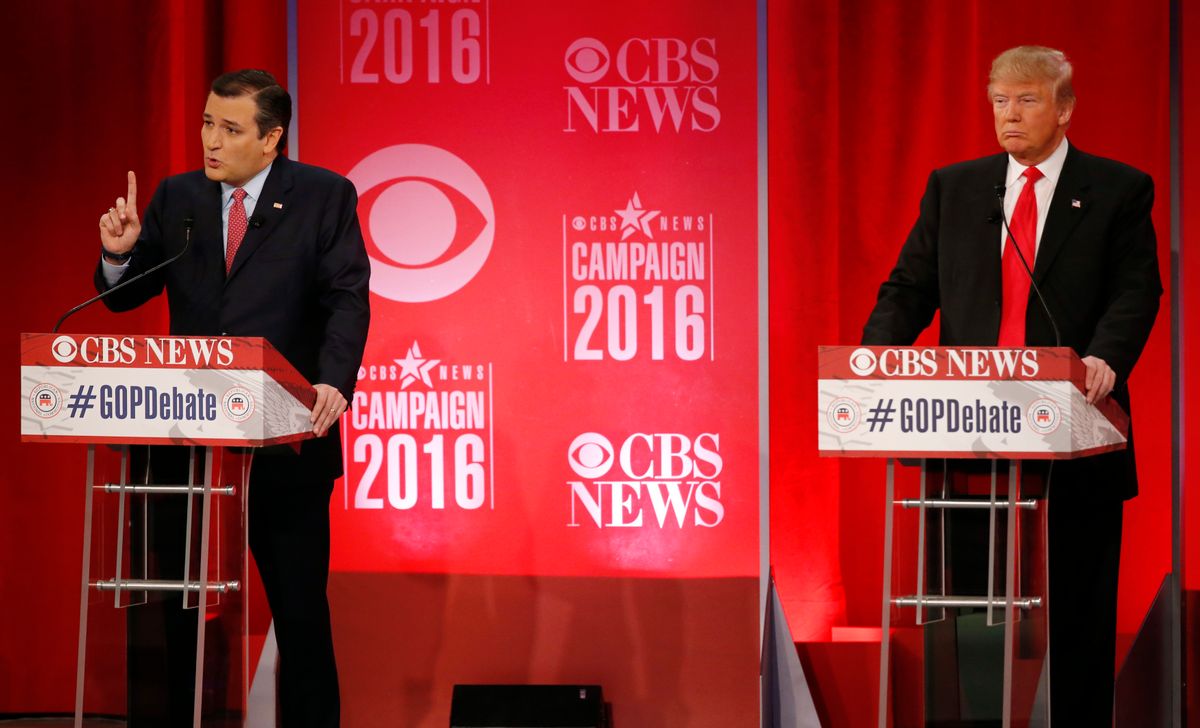 After Ted Cruz attempted to jump into round 3 of Trump v. Bush during Saturday's GOP debate, piling-on The Donald over his ideological flip-flops during a debate on eminent domain, Trump lashed out, calling Cruz the "single biggest liar" in the Republican presidential field.

Moderator John Dickerson asked the Republican frontrunner why he describes his past support for liberal politicians and policies as comparable to Ronald Reagan's turn to conservatism after being a liberal, to which Trump argued that his past usage of eminent domain as a private businessman was OK even though he now advocates against government usage of eminent domain is not a sign of hypocrisy, but rather necessary flexibility in life.

Jeb Bush fired back, arguing against the use eminent domain for private purposes as Trump has done for his business dealings while defending his own past usage of eminent domain as governor of Florida.

Ted Cruz then tried to get in on the action, slamming Trump for being a liberal who lacks any core principles, pointing out that Trump once compared rival Ben Carson to a child molester before later praising the retired neurosurgeon.

“You are probably the single biggest liar!” Trump yelled in response to Cruz.

“This guy will say anything. Nasty guy, now I know why he doesn’t have one endorsement from his colleagues,” he said, railing against the Texas senator.

"Why do you lie?" Trump repeatedly pestered Cruz before Cruz chided him that “adults learn not to interrupt.”

"Today we had robo-calls saying ,'Donald Trump is not running in South Carolina, vote for Ted Cruz’  when I’m leading in the polls," Trump claimed.

Citing Trump's donations to Democrats like Jimmy Carter, Hillary Clinton and John Kerry, Cruz argued that the New York businessman is not only a Republican in Name Only (RINO), but that he would appoint liberal Supreme Court justices, fear mongering that a Trump presidency would result in the loss of the Second Amendment (whatever that means), hours after the passing of conservative Supreme Court Justice Antonin Scalia.

Trump shots back that Cruz wanted John Roberts on the Supreme Court, a knock on the Chief Justice whose vote upheld Obamacare.

When Cruz mentioned Trump's past support for Planned Parenthood, the former reality TV star admitted that, aside from abortions, the women's health organization does “wonderful things.”

Twitter was left in complete disbelief at the raucous turn and rapid breakdown of the Republican Party on CBS' debate stage: