My drinks with a CIA mastermind: Over pinot noir in Georgetown, some hidden truths emerge

The CIA's top lawyer met me in D.C. He was chillingly honest about his work -- and what he sees as real threats 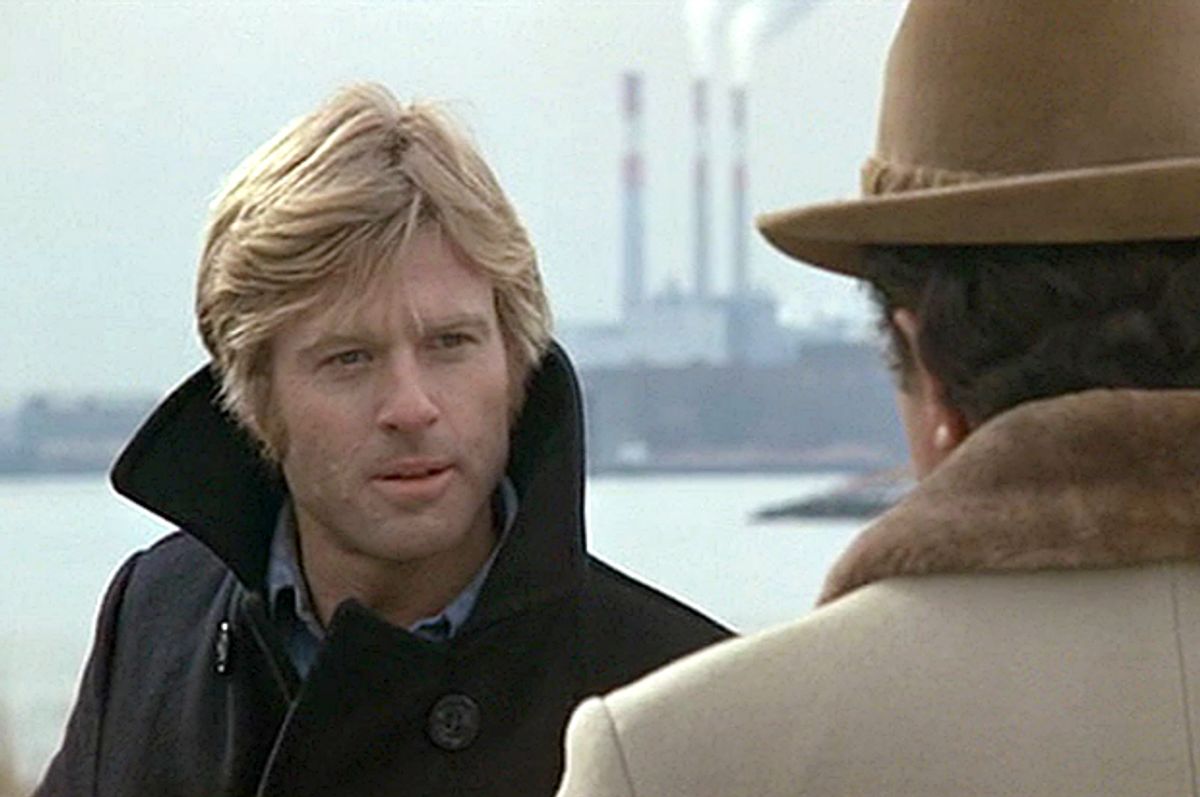 Robert Redford in "Three Days of the Condor" (Paramount Pictures)
--

When asked what it was like to know the majority of the CIA’s secrets for decades, John Rizzo, the former top lawyer at the agency, has a candid answer. He leans in close, his eyes sparkle, and he says, “Well, actually, Elsa, it was neat.” He pauses with a dreamy expression on his face, then reiterates – “it was neat.”

Rizzo is a man with a distinctive presence. From the minute he walks into the Tombs Restaurant in Georgetown on a balmy afternoon, he gives off an air of formidable sophistication. Although he’s now in his sixties, his eyes glimmer with nothing but youth. As we settle in at the bar and he orders a glass of pinot noir, his friendly demeanor and jovial attitude persist.

Throughout his time at the agency, Rizzo was known for his colorful style. In most photos of him, he wears pink in some fashion, whether it’s a pocket square or a bow tie. But on this autumn day, he wears a muted, academic ensemble – a tweed jacket, denim collarless shirt, and brown loafers. Retirement may have mellowed his wardrobe, but certainly not his spirit nor his opinions.

Our conversation begins with the Paris terror attacks, arguably the most psychologically impactful event on the American public in recent memory. He quickly pronounces that, “as horrendous as the [terrorist attacks in Paris were]…the reaction doesn’t come close to anything in the reaction after 9/11.”

However, he still sees Paris as a valuable catalyst for a broader discussion about terrorism to resurface in the public dialogue. “Paris can serve to remind people that there is still a significant terrorist threat out there…that it’s real, and that these terrorists are capable of planning and coordinating a highly sophisticated and ruthless kind of attack.

Rizzo chuckles. “So peoples’ memories tend to fade,” he finishes cynically, taking another sip of wine. “I’ve been lecturing around the country…and I’m struck…that the students really don’t have any real or firm recollection of the horror of 9/11. So, I mean, as terrible as it was, I think Paris could serve to…really reignite this debate.

"Sooner or later, there’s gonna be another attack on the homeland. Probably not a plane, but something…” he pauses and ponders, then repeats himself. “Something. It’s frightening.”

He also ties surveillance into the Paris discussion. “An attack like this, coordinated, simultaneous…these plotters had to have communicated with each other via some sort of encrypted communications,” Rizzo gestures to my iPhone sitting on the bar and shrugs.

If Rizzo is correct, the balance between privacy and security could very well tip back towards security and post 9/11 policies in the post-Paris era. In fact, he believes the balance is much more tenuous than President Obama has portrayed it.

“President Obama was quoted once as saying, “the choice between privacy and security is a false choice.” With all due respect, I disagree with that. It’s a real choice, and it’s a tough choice, especially in the balancing part.”

According to Rizzo, fears of intrusive government surveillance are hyped and unfounded. He seems frustrated with post-Snowden legislation and attempts by both the government and private companies in the U.S. to limit the surveillance capabilities of intelligence agencies.

“Believe me, the CIA has no interest in prying into the private life of – you, or virtually any American,” he laughs. “There’s no time for it, there’s no interest in it. So these fears about ‘Big Brother’ – it’s just not the way the system really operates.”

Rizzo is disdainful of those who harbor such fears, and especially those who act “promiscuously” on them such as Edward Snowden, the famed NSA surveillance whistleblower, and John Kiriakou, a CIA torture whistleblower. He slams them both and argues that it’s the responsibility of the CIA and NSA to spy on foreign governments – though one can only wonder what Germany and France would have to say to that.

“Snowden…was…29 years old…in Hawaii in a shack somewhere as a contractor for NSA, and he gets to decide what the world should know…about espionage activities against foreign governments which is what, you know, that’s what the CIA and NSA are supposed to do – that’s the whole point – they’re supposed to spy.”

As for Kiriakou, Rizzo’s criticism is more succinct and scathing.

“Kiriakou – he’s no Aldrich Ames. I mean, he’s an idiot,” Rizzo says without sympathy. “He wanted to be a big shot, that’s why he did it.”

I’ve always thought that most people leak because there’s a sense of grandiosity – that they know all the hot secrets…so I think that’s why lower-level people are involved.”

He also admonishes the companies that are currently resisting government access to its users’ information through so-called “backdoors,” such as Google and Apple. “There’s an obdurate refusal by these tech companies to cooperate with the government. I think it’s irresponsible.”

Rizzo says he is also “very surprised” that the Obama administration has been the most aggressive in prosecuting leaks and “even going after members of the media” under the Espionage Act.

“You would think Reagan, or George W. Bush – but no, Barack Obama.” He estimates the trend will continue, “whether it’s Trump or Clinton or Bush...whoever gets in the Oval Office is not gonna be soft on leaks.”

In regards to the State Secrets Privilege, the legal defense that the government invokes to shut down cases with any risk of jeopardizing national security, Rizzo’s input is chillingly honest.

“There really isn’t any legal redress [for persons attempting to sue the government or mount a defense and are blocked by the SSP]…unless and until the Supreme Court rules otherwise, the invocation of State Secrets sort of ends it.”

His assessment illustrates the hard truth that many who have attempted to defend themselves against prosecution by the government or who have sued for illegal rendition or indefinite detention have no chance at justice. Reform, absent Supreme Court action, is impossible.

Throughout our conversation, Rizzo alludes to a sustained image problem with the CIA that may contribute to its negative perception. He seems jealous of the FBI’s more positive image and laments that throughout his career, the agency did a “lousy job” at public relations.

“[CIA] just shut down. FBI, on the other hand…[has] had a very active and engaged PR apparatus. Still the public perception of the CIA is based on movies, novels…and that’s what people really think the CIA’s like.”

The public perception of the CIA seems entrenched in its culture of secrecy. While it is certainly not a positive perception in most circumstances, it does not seem likely to change any time soon if the culture of the CIA itself remains stagnant.

As for Rizzo, his CIA is the bad-boy archetype of every high school romance film. Beautiful, mysterious, misunderstood, and quietly heroic, smoking cigarettes next to his vintage Camaro while the FBI golden boy wins the football championship. From talking to him, it’s clear he really believes in that image of the CIA. His starry-eyed captivation is palpable, as if it were the first day he fell in love with the agency and not thirty some years later.

After ordering another glass of wine, Rizzo is enthusiastic when the discussion pivots to incentives within the CIA. In response to the argument that the CIA has a vested interest in perpetuating conflict in order to sustain itself as an organization, Rizzo surprisingly nods.

“It is perverse, but true, that the most dangerous and risky adventures CIA embarks on are also the most exciting and the ones that give you the most satisfaction from having the privilege of participating in them because they’re so high profile,” he admits. He leans in again and grins with a hint of pride.

“The first seven years after 9/11 were the most exciting times at the agency,” he continues.

It’s true that the post 9/11 years did oversee a dramatic increase in business for the intelligence community, but to hear Rizzo boast of that is strangely disconcerting considering this boon occurred because of a horrific tragedy.

“Anything beats it being dull [at the CIA], you know,” he carries on casually, “being bored, or feeling neglected.”

Rizzo addresses the possibility of peacetime as well. “After the end of the Cold War… the agency fell into this funk because it was looking around for another mission… funding was cut, not as many good people applied. And I think that will happen again, if and when things become sort of dull.”

After finishing up the last of our drinks, we step out onto the twilight-lit corner of 36th and Prospect. Rizzo pulls a cigar out of his jacket pocket, pensively rolling it between his fingers as he stares into the distance. We return to the topic of secrets.

“It’s human nature to want to know secrets…and there are still a lot of secrets in my head I can’t talk about, but it’s still exciting to know them.” He breaks into a knowing smile, lights his cigar, and strolls off towards the warm lights of Georgetown.

Rizzo is complex. At some moments, he was magnetically inspiring and wholly goodhearted. At other moments, he seemed callous and even alarmingly cavalier about issues of grave importance. Neither white nor black, Rizzo was a immutable shade of gray – colored only by the thousands of buried agency secrets he beams so passionately about knowing.

Elsa Givan is a student at Georgetown University's School of Foreign Service and a staff writer covering Intelligence & Defense for The Qui Vive.  Follow on Twitter at @ontheqv.