Beyond the "F**k-off Fund": Even if you're "bad with money," you can take control of your finances for the long-term

Saving up enough money so you can walk off a soul-sucking job or leave a partner is the first step. Then what? 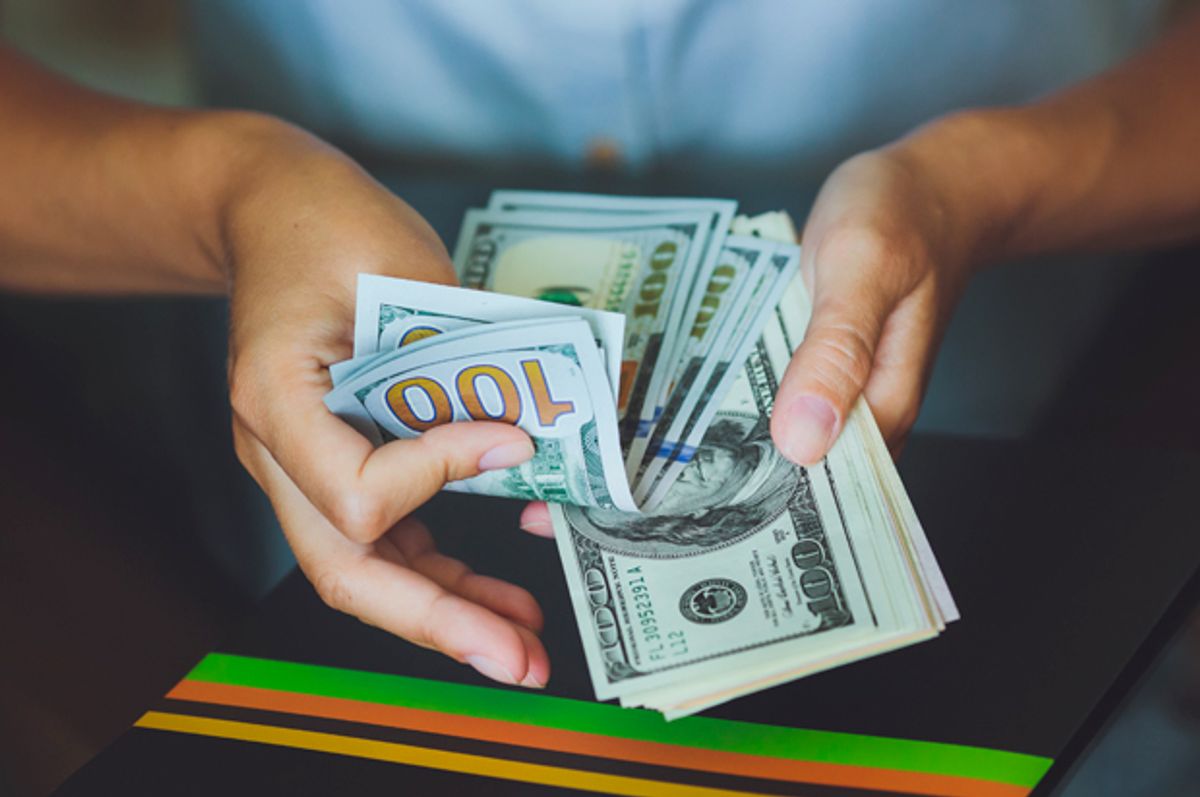 Last month, Paulette Perhach’s essay “A Story of a Fuck Off Fund” at the Billfold, which explored the ways not having any savings can keep us trapped in bad jobs and relationships, while having said fund can mean the freedom to make better decisions, took the Internet by storm. Parents recommended teaching their kids about such funds, and sites like Jezebel and The Frisky lauded the concept. One writer shared how a fuck-off fund helped them to leave abusive situations, while another recounted how challenging it can be to gather even that bare minimum. At Refinery29, Lindsey Stanberry took issue with the questionable financial choices Perhach recounts, asking, “Why does almost everyone insist on talking to women about money like we’re idiots?” It makes sense that it struck such a nerve when you consider that most Americans have less than $1,000 in savings, according to a December 2015 Google Consumer Survey.

While Perhach details the practical implications of not having such a fund, there are also emotional costs involved. “I have been in a situation where I haven’t had [one]. It feels terrible,” Perhach told Salon. “You’re always scared when you’re broke. You can’t afford mistakes, you can’t afford surprises. When you have money, you feel more calm.”

Perhach, a 33-year-old Seattle writer who detailed the economic struggles that led to her moving back home with her mom for Salon in 2013, not only saved up her fuck-off fund, but also paid off about $20,000 of debt between 2012 and 2015 thanks in large part to Excel—and outside accountability. Inspired by listening to financial author Dave Ramsey’s podcast, she started both an Excel spreadsheet listing all her bank accounts and their totals, and a blog she told a handful of people about. The only one who read it consistently was her best friend’s mom, but that minimum amount of outside accountability was enough to keep her motivated.

Perhach has also gotten creative about how she handles her money, knowing that it’s not her strong suit. Despite her impressive savings, she says, “I’m really bad with money,” but has found a way to turn her weakness into a strength. “Taking the shame off that for myself and just saying that and not expecting myself to be magically good with money” has made a world of difference. For instance, for a while, she paid her rent in two checks per month, when she received her paycheck, because she didn’t trust herself to do it differently. Even when her boyfriend asked, “Can’t you just keep the money in your bank account?” she knew that she couldn’t promise that.

According to Helaine Olen, Slate columnist and co-author of "The Index Card: Why Personal Finance Doesn’t Have to Be Complicated," the concept of a fuck-off fund isn’t new. “This is a concept that’s been around forever,” she said, better known by the term “fuck-you money.” She said it’s a vital concept for everyone (not just women), especially since surveys have shown that anywhere from 40 percent to 76 percent of Americans live paycheck to paycheck. “It becomes this chicken or egg problem; are they having a hard time because they have access to easy credit or is easy credit out there to help them because our salaries haven’t kept up?”

Wherever you’re starting from, Olen emphasizes that even the most minimal efforts toward savings can have a powerful impact and are vital to being able to handle financial contingencies. “In 'The Index Card,' we say strive to save 10 to 20% of your income,” Olen said but admitted “that’s a long-term goal.” If you can’t do it all at once, don’t give up entirely. “I would rather see you save $10 a week than have you throw up your hands and say ‘I can’t save anything.’ It’s a good habit to get into.”

Its effects may extend beyond just your bank account. Olen says having such a fund may lead to more confidence, which can have a ripple effect. “Often when you project confidence, you’re simply treated better,” explained Olen. “I think having this sort of money sometimes helps with that. It allows you to take risks you might not otherwise take; you might take a job that pays lower but you think has better long-term growth, or you decide to move to a different city without a job.”

Perhach agrees. “Let’s say you get a dream job offer, but it’s an internship,” she posited. Maybe the New Yorker offers you an internship in Paris, but it doesn’t pay. With the help of your fuck-off fund, you can consider, in Perhach’s words, “If I go there, can I work nights and waitress? It gives you that little buffer. You can really look at what’s best for you and take a little more risk if you want to. It’s definitely a fuck-off fund, but if you have $5,000 in the bank, it can be renamed something else, like a dream job fund.”

Yet a fuck-off fund isn’t an excuse to be unrealistic about just how far that money can go. When Perhach got accepted into NYU Paris’ low residency MFA program, which she wanted to attend “badly,” she was even studying French already. But she totaled up all the costs and found it would have been $90,000, far outside her budget, so she declined after having what she calls a “hard conversation” with Excel.

Nicole Lapin, author of "Rich Bitch: A Simple 12-Step Plan for Getting Your Financial Life Together...Finally," warns that a fuck-you fund is not a career panacea. “Even if you have that fuck-you fund, that’s not going to last forever,” Lapin told Salon. Instead of simply relying on the fuck-off fund as a way to flounce off into the mythical sunset, she urges people to learn about their next step before they actually take it, so if they do quit a bad job, they’re prepared.

“Maybe there’s something that you just can’t get out of your head and you’re obsessed with,” Lapin said, such as raising alpacas. Is this simply a fantasy job or a viable career move? “You need to figure out what that actually looks like. Is it just because you want to pet fluffy animals all day long? That’s one thing, or do you realize what it takes to actually start a business around that? You have to shovel poop, you have to deal with marketing, hiring people, contracts, all the stuff that goes into a business. Sometimes people think, I’m going to follow my passion and play with alpacas. Maybe that’s a cool thing to do, but maybe that’s not a business.” In other words, it’s not just about the grand gesture of leaving a job, but figuring out what you’ll be saying yes to next.

“Sometimes it’s just as important to realize what you don’t like as realize what you do like,” advised Lapin, especially if you’re thinking of striking out on your own and starting a business. “I think a lot of us have this idea that the proverbial grass is always greener and sometimes that is the case, but sometimes you need to test it out and maybe you just get it out of your system.” Lapin recommends biding your time at the job you’re not in love with but test out your second job idea on the side. By doing it part-time, you’ll see if it’s a good match and better know what you’re getting into before you blow your fuck-you fund on a venture that might leave you back where you started financially.

As for the fuck-off fund, both Olen and Lapin recommend first having an emergency fund, something that will cover essentials in case of a true emergency where you don’t so much decide to leave an ill-suited job or home, but the decision is made for you. Maybe you’re laid off, you get sick, your car breaks down or you need to help a family member. As a first step, Perhach recommends following Dave Ramsey’s advice: gathering a $1,000 emergency fund, as quickly as possible.

Lapin suggests saving three to six months’ worth of funds to cover basic life necessities like rent, food, healthcare, etc., if you have a steady job, or nine months' to a year’s worth if you’re a freelancer or your income fluctuates. According to Lapin, a “fuck-you fund” should actually be the final step after your other financial necessities are in order. “First pay off any debt, especially credit card debt, because that’s going to accumulate faster than any of your savings is going to grow,” she advised. Then you can gather your emergency fund, ramp up your retirement find, and after that, focus on a fuck-you fund.

Ultimately, according to Lapin, the key to savings is changing your mind-set, since studies have shown that saving money can lead to happiness and, Lapin suggests, confidence. “[Savings] is not a bill; you’re investing in your future self. I think of it as you’re spending on your amazing future. Focus on all the awesome things that you’re getting from it. Once you change from a sense of deprivation to a place of aspiration, that becomes a big motivating factor.”

Additionally, spending just for the sake of spending, even on supposedly fun things, may not yield the intended results if it’s pushing you further into debt. For Perhach, being debt-free and having a fuck-off fund have changed how she feels about spending money on non-necessities like travel. She can enjoy it now in a way she didn’t before. “There’s a lot of things that you do supposedly for fun, but I think the base of having fun is not feeling like you’re in trouble,” she said. “[Being] on vacation and feeling you’re going to get home and get that credit card bill and be in trouble takes away from that. It’s nice to not feel guilty about it, to say, I can have this.”

For those who can’t seem to get started saving toward any kind of fund, Lapin says, “There’s always ways to save a little bit. I break down a budget into 70 percent to the essentials, 15 percent for extras, which is the fun stuff and 15 percent for the end game. The end game is your savings, your investments, your retirement.” She recommends having even a small amount, such as $5, automatically deposited from your paycheck into a savings account, or otherwise automated so you don’t even notice it, then increasing that automated figure as you’re able to.

Perhach believes that knowing why you’re saving and what it means to you can help you keep that paramount the next time you’re invited out for a fun but pricey evening. “Part of what I wrote about in fuck-off fund was spending money to impress other people and live the life that you think other people want you to live. There’s a kind of self-respect in saying ‘that’s not in my budget.” Staying strong in the face of peer pressure (or even the lure of whatever shiny new purchase catches your eye) can motivate you to keep saving, according to Perhach. “I definitely got a lot of confidence from paying off my debt and knowing I could do that. Saving up for a fuck off fund is a long-term goal and no one else cares about it but you. You’re the only person that can do that.”