Donald Trump and Gavin McInnes: The faces behind the rise of secular but even more odious right-wing misogyny 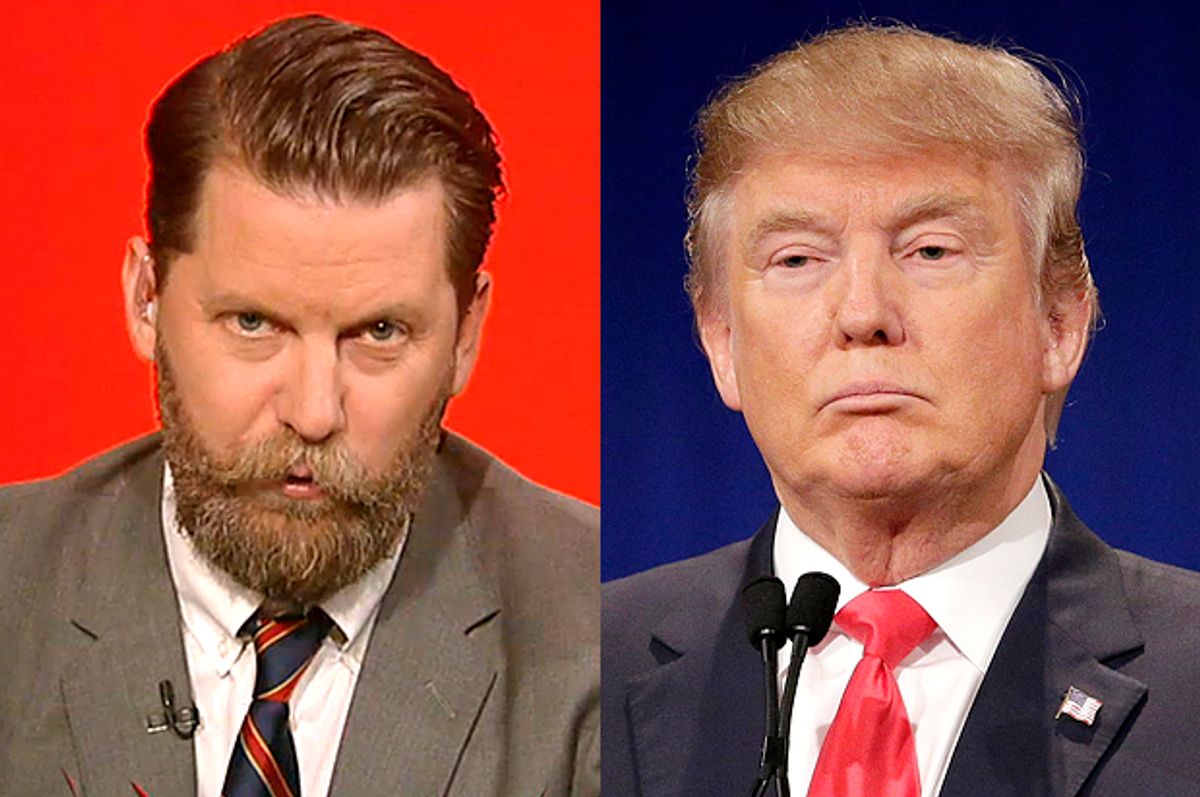 On a network that is full of extremely weird talking points, it takes a lot to stand out as truly bizarre, but Gavin McInnes managed to pull it off recently on Fox News. In a discussion about women getting drafted, McInnes took the usual anti-feminist blather of the network to a whole new level, arguing that it's actually men who are the second sex in our society.

The talking point is self-evidently false —1 in 10 rape victims are male, in case you were wondering, and even among the prison population, a woman is more likely to be sexually assaulted — but what made it stand out was that it was so strange. Fox News hates feminism, for sure, but this kind of rhetoric is out of step with its usual gender framework, where men are presented as strong, paternal figures  who deserve to run the world, not as victims of some kind of horrific matriarchy that violently oppresses men.

But if you've been following the growth of the self-declared "men's rights" movement online (and it exists almost solely online), this sort of rhetoric will be very familiar to you. Claiming that women are the ascendent sex and that men are oppressed is its bread and butter, and now its rhetoric is starting to move into mainstream conservative, aided by men like Gavin McInnes. And this new form of anti-feminism may even be helping Donald Trump maintain his lead in the Republican primary race.

For the past few decades, right-wing opposition has largely been framed in religious terms, with a focus on steering women toward traditional marriage and away from demanding equality at work and at home. Using feel-good words like "faith," "family" and "life," the right attacked reproductive rights on one hand and single mothers on the other, trying to create a situation where having children young wasn't optional and having them alone wasn't either.

That hasn't changed, to be clear, but what the past decade has shown, with the help of the Internet, is that there's an entire contingent of misogynists that isn't so much worried about getting women pregnant and married young as they are just angry with women.

They're not pro-choice, but they tend to obsess less about abortion and way more about rape and domestic violence, which these men, who call themselves "men's rights activists" (MRAs), believe aren't very serious problems. MRAs tend to argue, in fact, that feminists exaggerate these problem because they are out to get men. Minimizing gendered violence and harassment, complaining that women don't try hard enough to please men anymore, and painting women as ungrateful gold-diggers are the main issues. It's like taking every creepy dude's complaints about his ex-wife and trying to turn it into a political movement.

The main impact of MRAs has, until recently, been a bunch of pointless squawking at feminists online. (They are masters of flooding a comment section under a feminist article and making it unreadable.) But their obsessions are starting to leak into mainstream conservatism, giving more fuel to a movement that doesn't even try to hide the misogyny behind faith-and-family.

But now MRA nonsense is popping up in mainstream conservative media more often. In December, Fox News produced an entire special to prop up probably the most important MRA obsession, which is arguing that rape statistics are exaggerated and the women routinely "cry rape" to cover up for consensual sex. It's complete nonsense, and, in fact, sexual assault is drastically underreported. Spreading this myth makes it harder for rape victims to be believed and easier for rapists to get away with it, as well. But MRAs are more worried about demonizing women and Fox News wants their loyalty, so this is what we get.

McInnes is probably the most MRA-affiliated pundit on Fox News, having trotted out MRA truisms such as blaming rape on women going to parties instead of men choosing to rape and even telling women that cutting their hair short is the equivalent of raping men. (MRAs are obsessed with short hair, for some reason, and routinely claim that a woman cutting her hair short is somehow hurting men by doing so.)  But Jesse Watters, from "The O'Reilly Factor," is a close second in pushing this secularized misogyny that doesn't even bother to pretend that it's about faith or family.

Watters is a reliable source of MRA-pandering rhetoric, with his tired jokes about women drivers and his shameless willingness to sexually harass much younger women on camera. But his most perfectly MRA moment came in 2014 when, on "Outnumbered," he called single female voters "Beyoncé Voters" and argued that they "depend on government because they’re not depending on their husbands." He did this in front of four female pundits, all of whom obviously have jobs and are living proof that there's a third financial option for women besides living on welfare or being a dependent housewife.

Why say something so stupid? Well, this assumption that women are inherently dependent on men, and if they're not dependent on a husband it's because they're living off male tax dollars (women also don't pay taxes in MRA-land) is a common MRA assumption. And MRA thinking is leaking, bit by bit, into mainstream conservatism, and if appealing to that crowd requires pretending women don't have jobs, so be it.

Looking at the rise of this more blatant, more secular form of misogyny, it starts to become clear why Donald Trump — who cycles through trophy wives and who reduces every woman, even his own daughter, to whether or not they seem boinkable to him— is an acceptable candidate to conservatives. It's not that the religious right has gone anywhere, as the women living in states where abortion access is swiftly disappearing could tell you. It's that the right is making room for a whole new kind of misogynist, one who doesn't bother to hide it under a layer of religiosity and one who feels perfectly free to flip out on any woman who dares question him by accusing her of getting her period. In a lot of ways, this presidential candidate is already President MRA.