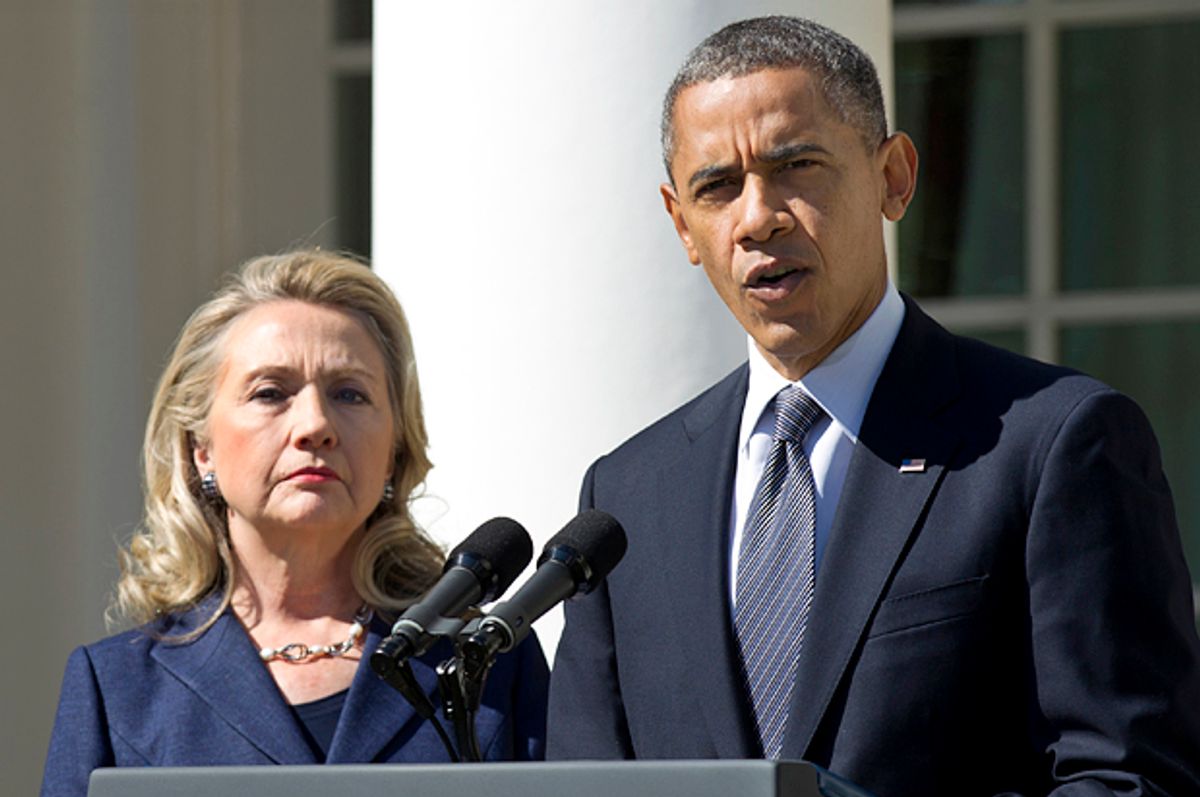 After Thursday's debate it's clear what Hillary Clinton's closing message is: “Vote for me if you want a third Obama term.” Clinton mentioned Obama 21 times during the debate, and almost every time it was to imply that she's a stronger supporter of the president and, more important, better prepared to continue his legacy. She even dodged questions about her financial ties to Wall Street by noting that Obama accepted more donations from bankers than any Democratic candidate in history. The point wasn't to bash Obama but rather to reject the idea that “if you take donations from Wall Street, you can't be independent.”

The most contentious – and revealing – moment of the debate was arguably when Clinton went right after Sanders on his criticisms of the president:

“I want to follow up on something having to do with leadership, because, you know, today Senator Sanders said that President Obama failed the presidential leadership test. And this is not the first time that he has criticized President Obama. In the past he has called him weak. He has called him a disappointment. He wrote a forward for a book that basically argued voters should have buyers' remorse when it comes to President Obama's leadership and legacy. And I just couldn't disagree more with those kinds of comments. You know, from my perspective, maybe because I understand what President Obama inherited, not only the worst financial crisis but the antipathy of the Republicans in Congress, I don't think he gets credit he deserves for being a president who got us out of that...The kind of criticism that we've heard from Senator Sanders about our president I expect from Republicans. I do not expect from someone running for the Democratic nomination to suceed President Obama.”

The subtext is hard to miss here: Clinton is suggesting that Sanders is unrealistic, doesn't support Obama's agenda, and can't be relied upon to carry on his work. Sanders, for his part, pushed back: “Madam Secretary, that is a low blow. I have worked with President Obama for the last seven years...But you know what? Last I heard we lived in a democratic society. Last I heard, a United States senator had the right to disagree with the president, including a president who has done such an extraordinary job.”

Tactics aside, Clinton's decision to align herself with the president is an interesting one, and it's more than defensible. Clinton's philosophy and message is much closer to Obama's than Sanders'. In a recent conversation with Vox's Ezra Klein, veterans of Obama's 2008 and 2012 campaigns talked about their frustrations with and admiration of Sanders.

“Obama got in the race to be president,” said Dan Pfeiffer, Obama's communications director in 2008, “and Sanders got in the race to send a message. And you can see that difference in their approaches to policymaking. Obama wouldn't support a policy unless he felt it was feasible if he was president. Sanders doesn't seem to have that limitation, which gives him more message purity...but is a huge substantive and political problem if he ends up in the White House.”

There is a lot of truth to this. Clinton is a pragmatic incrementalist, like Obama. She appears to share several of the same goals with Sanders, but is much more cautious – or cynical, depending on whom you ask – about the prospects of achieving them. Obama, despite his transformational message, wasn't, as David Axelrod says, “the candidate of the left.” Instead, he wanted to change the climate of Washington, make it more congenial and less ideological. Bernie, on the other hand, is a pugilist by nature; he wants to shake everything up.

Perhaps the biggest difference between Sanders and Obama is their contrasting approaches to corporate power. Jon Favreau, Obama's speechwriter in 2008, elaborates:

“It's not just that Obama doesn't think that's feasible [purging corporate interests from the process], it's that he doesn't think that's the right way to govern in a pluralistic democracy where everyone gets a voice. Obama believes that there's too many Americans who don't have a voice, and too many Americans don't have opportunity, and that a big reason for that is the power of special interests and big corporations. But he also believes that there's a place for those interests and corporations in our system.”

This is an area in which Obama and Clinton are in lockstep. I'm not sure Sanders wants to completely expunge Big Business from the process, but he certainly wants something close to that. Which of course is a great idea. The problem, though, at least from the perspective of Clinton and Obama, is that it's not possible. Even on an issue like single-payer healthcare, which Obama (and Clinton) would likely prefer, the president couldn't even get his Democratic colleagues to back him on the public option. It's not at all clear how Sanders could overcome this.

The point, in any case, is that Clinton and Obama are very much alike. They may hold progressive principles (although Clinton's record invites skepticism), but they govern like calculating centrists. Sanders speaks for those tired of this approach, who regard it as an ethos of capitulation, not pragmatism. This is a difficult position for Clinton, mostly because telling people what they can't do isn't inspiring. But it may be enough to secure her the nomination.