A handful of people are taking gun control activism a step further. Is anyone listening? 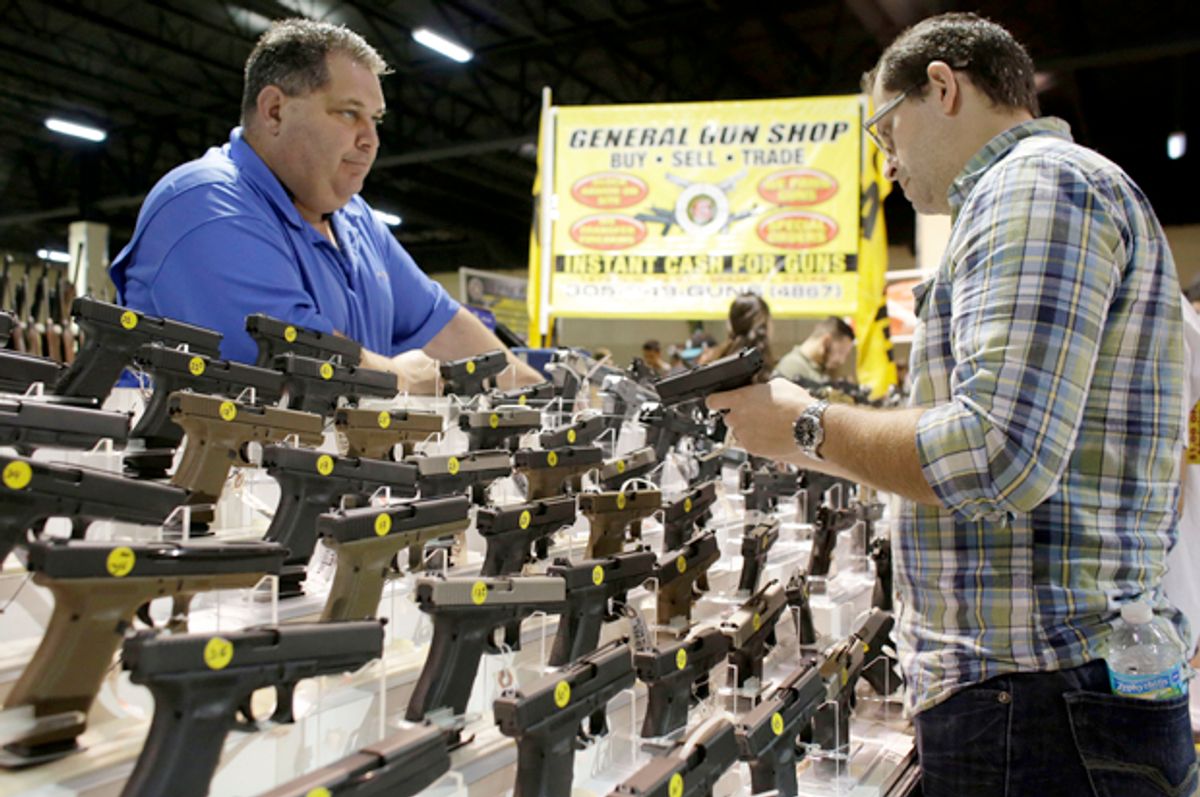 “Why is nothing happening?” Katie Couric asked filmmaker Stephanie Soechtig in the aftermath of the massacre in Newtown, Connecticut, after Congress failed to pass reasonable gun control legislation supported by more than 90 percent of Americans. In response, Soechtig made “Under the Gun,” one of an unprecedented four firearm-centric films at this year's Sundance Film Festival.

But anybody who has spent any time in the gun control effort already knows the answer to Couric’s question. Nothing happens because the Second Amendment stands in the way.

Thanks to Supreme Court precedent set by the Scalia-led majority decision in 2008’s Heller v. Washington, which decided the right to bear arms applies to individuals for self-defense in the home, most activists are forced to give up dreams of assault weapon bans and magazine limits and play small ball: closing loopholes and expanding background checks, Heller-friendly measures that, an AP review found, will not keep guns from mass shooters. Even Karl Rove says that the only way to stop shootings would be to repeal the Second Amendment.

Some people are trying to do it.

In Stanislaus County, California, out in rancher country where carrying a firearm is a necessity to guard against man-eating feral hogs if not a tyrannical government, Mike Barkley knocks on the doors of Ammon Bundy-types and tries to convince them to send him to Congress so he can “shut down the gun madness and make guns a privilege, not a right.”

“Without wanting to put a Second Amendment repeal resolution in the congressional hopper, over and over again,” he says, “I would not be running.” The idea is to have a proposal at the ready, for when the time is right, when the makeup of Congress aligns with the public mood, creating a wave that a repeal amendment can ride to ratification.

If Barkley gets his chance, he will be the first congressman to try to repeal the Second Amendment since the 1990s, when his hero, Rep. Major Owens of Brooklyn, New York, tried it twice.

But how would the government even begin to confiscate the 350 million guns in America? Wouldn’t it lead to a second Civil War?

Barkley stresses that his plan does not call for confiscation. It would simply replace the current Second Amendment with a new one, much the same but with new wording that allows for more innovative legislation. For example, he wants a tax placed on each firearm per household.

Barkley estimates that only one in a thousand voters gives him a hard time. “For most of the people I speak with,” he says, “guns are not a priority.” Maybe six voters out of 100,000 have been supportive of his plan, he says.

Goodman is a Chicago-area attorney and 2004 congressional candidate who has founded an organization, Peaceful Communities, to “educate, agitate and organize to repeal the Second Amendment.”

He agrees with Barkley about the need to have a repeal amendment floating around Congress. He points to Democratic efforts to pass an amendment repealing Citizens United, or Republican ones to pass an amendment banning gay marriage. “If and when any one of them will actually make it through Congress and the ratification process,” he says, “is very difficult to predict.“

The Constitution, Goodman points out, has been amended 17 times since 1791, or about once every 13 years. And all those amendments at one time seemed very unlikely, including the 13th, which ended slavery but not before involving a horrible bloody war.

Are these guys on to something? Why aren’t we doing this?

Because aside from Barkley and Goodman, pretty much no one else seems to want to. Though we are beyond outraged at the constant shootings, the leading MoveOn petition calling for repeal has a mere 2,500 signatures—not quite the three-quarters of the states needed to prevail. And the Twitter hashtag #repeal2A is not exactly shaping up into the next #blacklivesmatter: It currently serves mostly as a forum for apparent spambots. Repeal is not something most people like to think about.

Besides, “if the Second Amendment were repealed tomorrow, very little would actually change right away. Chicago and D.C. might try to reinstitute their handgun ban, but virtually every state constitution carries a provision upholding the right to keep guns,” says Josh Blackman, a constitutional law expert at the South Texas College of Law.

Repealists respond that they understand that, but right away is not what they have in mind. Repeal would allow Americans over the ensuing decades, or even century, to write the laws we want with regard to firearms. If we want to regulate them like we do cars, we would be able to.

But we have never repealed one of the Bill of Rights. Could we even do that? Shouldn’t those be left alone?

Blackman says there is nothing sacrosanct about them—like any other amendment they are subject to Article V of the Constitution. If we want to repeal one, if the criteria is met, then repeal it we will. But he warns of a slippery slope:

“Once you repeal one Amendment, society normalizes the process of repealing another,” he says. “It casts our constitutional liberties as transitory.”

So if we repeal the Second Amendment, we’d next be doing things like banning offensive statements, or requiring journalists to be licensed and registered—right?

Not at all, says Goodman. “Each of our constitutional rights are discrete concerns that stand on their own. The amendment enacting Prohibition did not result in a cascade of other amendments, and neither did the amendment repealing it.”

In fact, I could find no data or example in which repeal of one amendment led to a feeding frenzy upon others, and professor Blackman declined to provide me one. The argument of a slippery slope is an ideological one and not based in fact.

Goodman says that aside from having to stare down the expected hostile crowds and thinly veiled threats from gun rights supporters, he has mostly found a receptive audience.

“To a great extent, people have not considered the idea of repeal. And the response I get is, OK, why not? We are at the point now where people are interested and willing and eager to finally talk about making some changes. The idea is out there.”

Opponents agree—it certainly is out there. Shouldn’t we have learned from the Patriot Act how dangerous it is to trade freedom for safety?

Goodman responds, “People who are walking around neighborhoods right now afraid of being shot don’t particularly have what I would consider freedom. Nor do they have safety.”

Blackman says that repealists would be better off attacking the problem through legislation. Wait for a future Supreme Court that thinks more like John Paul Stevens than Scalia to overturn Heller. But after decades of seeing the NRA exploiting the indecipherability of the Second Amendment to thwart or neuter every potentially meaningful gun control measure, repealists are all out of faith that legislation can coexist with the provision as is.

Blackman brings up another potential problem: A repeal effort could backfire. Red states would retaliate by proposing an amendment strengthening the right to bear arms—for example, upholding the right of constitutional carry—which in our red meat climate could very well see more support than repeal would.

“That argument has merit,” admits Clark Moeller, a repealist in Sudbury, Massachusetts. “That’s a practical consideration.”

It must give repealists pause. Moeller says it doesn’t. A repeal effort, he says, won’t have a real shot for at least another 10 years, when, as another 33,000 die each year to gun violence and the number of gun owners continues to decrease, the popular tolerance for firearms, the romanticism of them, will dry up. “The gun narrative will change.” And with it, so will the conversation.

Moeller is a retired ACLU board member turned Second Amendment repealist pamphleteer. He spent the 3 ½ years after Newtown researching and writing his “Why the Second Amendment Should be Repealed,” which he makes available on his website, launched in August 2015.

“Since 2008,” Moeller writes, “the Second Amendment has become a lethal threat to Americans” and “has not served our national defense in 150 years.”

His biggest victory to date came in 2014 when the Sudbury Democrat Town Committee voted to endorse his ideas and make his paper available on its website. Moeller wants repealists to spread the idea by passing around his pamphlet and his website. He says his efforts are still in the exploratory stages. He is currently awaiting results of a nationwide poll he contracted to take the temperature of the public with regard to repeal.

To Moeller and the others, repeal is something the disparate gun control organizations like Everytown can and should unite under, to hone their confusing, weak message into a powerful clear brand that would finally make them a meaningful adversary to the NRA. There is nothing about repeal, says Goodman, that conflicts with what any of them are doing.

Everytown’s spokesperson tells me, “We believe that common-sense measures to save lives go hand in hand with the Second Amendment. We don’t engage in discussions on repeal.”

Mike Barkley, the congressional candidate, says, “Everytown is gutless. It's fear, as in, ‘Don't piss off daddy and he won't beat us anymore.’ It's a very big disappointment. You can tell them I said that.”

Though Josh Blackman sees repeal as a nonstarter today, he says the future of the effort relies on future Supreme Court decisions. “If the Court one day holds the right to bear arms includes outside the home, that would overturn significant precedent and make repeal much more valuable.”

So, repealists say, 10 or 20 years from now, when more is at stake with potential repeal, and the gun deaths are still unyielding, and mainstream America sees gun owners as polluters of the public health and small ball has still proven ineffectual, and people are still asking why is nothing happening, the idea of repeal will become a swift and sudden movement, not unlike the one to legalize gay marriage. A Congress of just the right makeup, one far more progressive and left-leaning than anything we see today, will begin to find themselves deluged by pro-repeal letter writing campaigns; pro-repeal voters will take a hard-line stance at the polls; NRA-pocketed politicians will find themselves ostracized and out of touch and out of jobs; professional associations and unions such as the National Education Association and police unions will adopt resolutions in favor of repeal and they will wield their influence. For the first few years the repeal effort will appear to go nowhere. But the resolution will be there, bopping around Congress, the idea will be out there, the mechanisms will be in place. Then one day: another shooting, something worse than we thought we would ever see. And we will see what Mike Barkley and Lee Goodman and Clark Moeller see, and we will clamor for repeal, we will plead and scream out for it, we will demand nothing less—and, repealists say, we will get it. And, in time, it will make the shootings stop.

James Boice is the author of "The Shooting," coming in September 2016 from Unnamed Press.