Peter Straub's childhood horror: "I knew more about fear and its first cousin terror, and pain, than children are normally expected to know"

Salon speaks to the veteran horror writer about bullying, H.P. Lovecraft and how dark he'll let his writing get 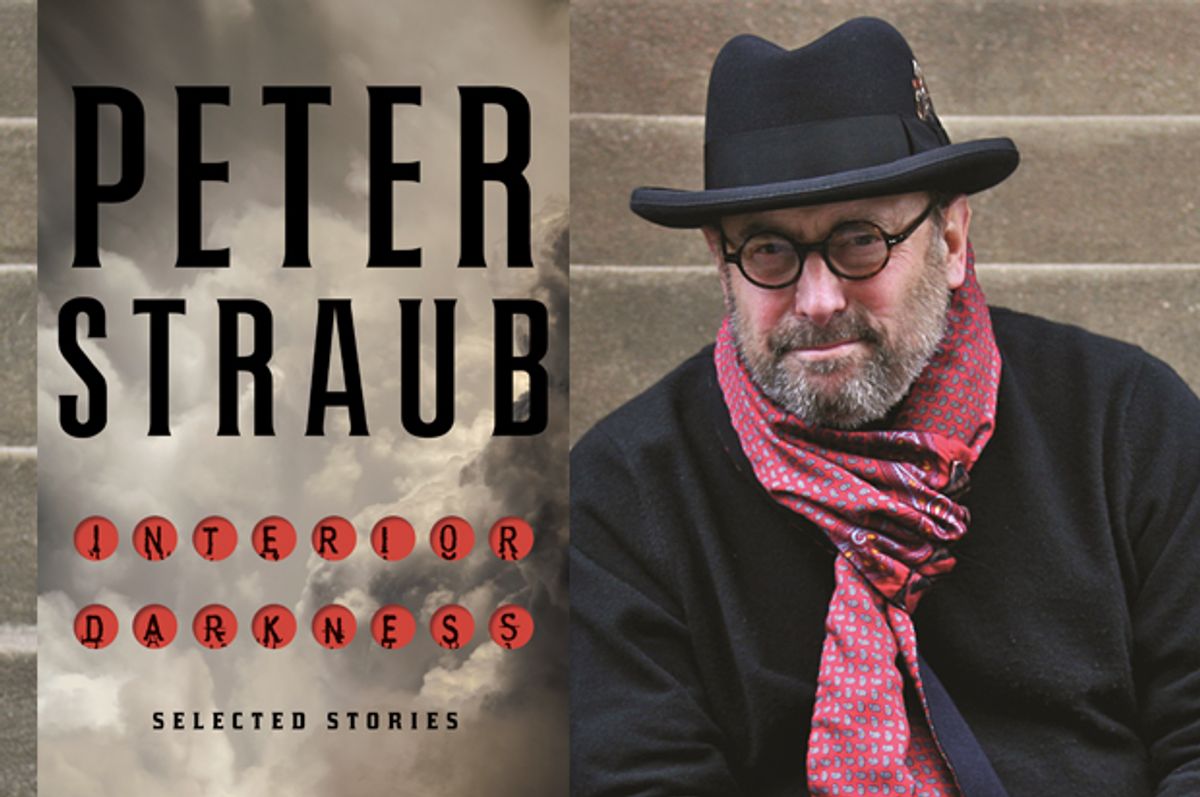 Horror writer Peter Straub is far more genial than anyone who writes such frightening and grotesque fiction should be. The Milwaukee native has a friendly Midwestern delivery even as he talks about acts of violence and the pain of his early years.

Straub, of course, is best known for novels including “A Dark Matter,” “In the Night Room,” “Lost Boy, Lost Girl” and “Ghost Story,” which became a 1981 movie. He's also written books of poetry and two novels with Stephen King.

Next week, Doubleday releases “Interior Darkness,” a selection of 16 of Straub’s short stories, including three that have never been collected. Neil Gaiman has described the short fiction as "like tiny novels you drown in."

Straub is also a student and scholar of horror-story history: He has edited volumes on “The American Fantastic Tale” and the work of H.P. Lovecraft for Library of America.

Salon spoke to Straub from his home in New York; the interview has been lightly edited for clarity.

It must be daunting to try to wrap an entire career’s worth of stories into one book. How did you decide which ones made it in?

At first I thought that I could have a one-volume collection of stories, and when I suggested that to my agent, David Gernert, he said something that I didn’t quite understand about two volumes. I thought he must be wrong, so I added things up and I realized if I tried to do everything it would be way over a thousand pages, almost 2,000. So that meant I really had to be careful about what I chose.

So of course I chose the ones I especially like. Within that category, then I had to do a lot of further trimming, because a lot of my shorter fiction is still really pretty long. There are a lot of novella-size pieces that I like and am proud of that I could not fit into the book. At which point, my criteria had to do with themes. That is, what stories echoed other stories, what sorts of themes were repeated, and which ones did I choose to repeat? If I specify these themes, it’s going to sound like a bloodbath, or like some kind of Grand Guignol or extremely perverse set of stories. So if you don’t mind, I’m not going to do that. But I do have stories that echo the content of other stories and I had to decide which ones I wanted to admit into the book.

Is bullying an important theme to you? It appears in “Blue Rose.” How often does it show up in your work?

That’s a good way to put it. I’m sure it does. It probably did more so in earlier work of mine when I dealt more with young people. Because it comes up on a daily basis, really, if you’re talking about children or high school students. It’s morally offensive, it’s interesting, it speaks to a lot of people, it evokes genuine and painful feeling, so it’s something there to be used for sure.

A perfect subject for horror, I guess.

[Laughs] Yeah. What I like about it is you can call it “horror,” and it is horrific, yet it isn't anything like conventional horror as it is understood by most reviewers.

Let’s stick with childhood for a minute. You had a car accident when you were young. What kind of effect did that have on you and your writing?

It took me a long time to see this, but of course it kind of darkened my view of life in general. It meant that I was way more open to fear than any child ought to be, and that I knew more about fear and its first cousin terror, and pain, than children are normally expected to know. And it meant that I was kind of pushed forward into an emotional understanding that I wasn’t quite prepared for.

It was very, very complex. I had nightmares; my behavior suffered. I darkened in character; I was less amenable, less friendly. I was way less a child than I had been beforehand. It took me a long time to understand the consequences of that single event. Once I did understand the consequences then I was far more able to deal with them. It meant also that I had that material available for conscious thematic use.

So did it help make you a writer?

It helped make me a different kind of writer. The sort of thing that I had written before this that was all available for conscious use was “Ghost Story” and “Floating Dragon.” Afterwards, the kind of thing I wrote was “Koko” and “Lost Boy, Lost Girl,” in which the supernatural is not a part of experienced life at all.

What influence has poetry had on your writing?

I did love poetry with a full, overflowing heart for most of my young manhood and, in fact, still do. I buy a lot of poetry; I read a lot of poetry; I have shelves full of poetry books. I can’t write it anymore. I’m not quite sure that I wrote poetry at all well. But anyhow, though, I certainly did it with great dedication for years.

What it did for me was to allow me to pay great attention to individual phrases, individual words, to the cadences of sentences as they moved across the page. It made me far more linguistically aware than I would have been otherwise. Also, it made me more aware of the way the writing sounded in one’s ear. There are writers who I read sometimes that you can tell have no idea how their work sounds. They can be very, very good writers, although their work is actually very ugly.

To choose a case that’s not going to hurt anyone’s feelings or insult anybody, Theodore Dreiser was a great example of this. He wrote ugly sentences, and you can tell the sound of the language meant nothing to him at all. It’s a little punishing to read, but nonetheless he is a marvelous and great American writer.

But someone whose work you can’t really hear?

Or you can hear all too well. Clunky and ugly and it just doesn’t sound good.

How often do you kill off or punish your most vile characters? Does that happen much in classic horror?

No, it probably doesn’t happen much in classic horror. That is -- I’m thinking of Dracula or Frankenstein or supernatural creatures in general -- part of the problem is you can’t kill them. I guess you can kill a werewolf, but I don’t have much interest in writing about a werewolf anyhow. I like the worst characters, I like the villain. You can almost always tell there’s a lot of imaginative sympathy for them on my part. Once I start thinking about how they got that way I feel empathy and compassion. I don’t want to kill them off.

I do sometimes kill off the worst. In the long novel called “The Throat,” there’s a very, very bad character who’s had a long, long career of being a killing machine, an absolutely soulless character. And one of my heroes, with great satisfaction, literally pulls the trigger on him. So I’m not in love with evil people at all. It’s just that I think that very bad people aren’t born that way and that we increase our intelligence if we begin to understand how they might have been formed.

You’ve been an advocate of H.P. Lovecraft for a long time. What did he do better than anybody else?

Lovecraft was an extremely imaginative man. He invented a scheme that people still thrill to. Out of his sense of his own frailty, he evolved a way of seeing the world that was dramatic, frightening, involving. It had within it all sorts of great readerly qualities. He was an interesting stylist, but not at all a beautiful one. But he wasn’t anything like as bad as he’s sometimes described. He did have a tendency toward, let us say, stylistic enthusiasm.

He could be purple.

He could be purple. He liked exclamation points too much and italics too much. [Laughs.] But Stephen King likes italics and I like italics. Lovecraft probably used those devices a little more than most people would. He was very, very good at a slow burn. Lovecraft was never the scaremonger that people like to think he was. He worked his way in, down many a little trail, through layer after layer, before you got to what he was really talking about. I really like that a lot. That did influence me hugely. The idea that you could work by indirection, you could work in a collage-like manner. For whatever reason I found that very exciting and it did influence me. I was very pleased to be able to do some work with Lovecraft for the Library of America.

What else did you pick up from him? Did you discover him at an early enough age that he could make a real impact on you?

[Laughs.] I did, yeah. When I was maybe 11, I discovered this great Modern Library book, one of the great horror anthologies of all time, called “Great Tales of Terror and the Supernatural.” It had just an amazing amount of great stuff. The stuff I really liked was the stuff I didn’t immediately understand, because of the way that it was written. And Lovecraft was chief amongst those writers.

That I had to work a little bit to get inside “The Dunwich Horror” meant that I valued “The Dunwich Horror” more than most of those other stories. It’s half written in the typical Lovecraft English that was influenced by 18th century English, and it’s also half written in dialect, so you have to try to figure out what these people literally are saying. These little challenges kind of awakened the story for me.

Is any topic off limits for a horror writer? Anything so gross or disturbing that you would shy away?

[Laughs.] I wonder. I don’t really think that I’ve backed away from anything. At one point I would have said something like child abuse, but when it occurred to me that it was open to me in a particular way. What I wanted to do was show it as transparently as possible. I wanted it to really be seen. I think that’s because it is so awful. What happens is so destructive and demeaning to its victims that I thought it was worth doing.

There’s a lot of stuff that I think people in general prefer to back away from that I simply cannot back away from, temperamentally, because I don’t think we have the whole world in mind or in view unless we also include these things. Those kinds of things are of immense importance in allowing us to see what’s going on around us in the proper way.