The pledge of allegiance must go: A daily loyalty oath has become a toxic, nationalistic ritual

We make students salute national greatness for 13 years. No wonder Trumpian anti-intellectuallism is on the march 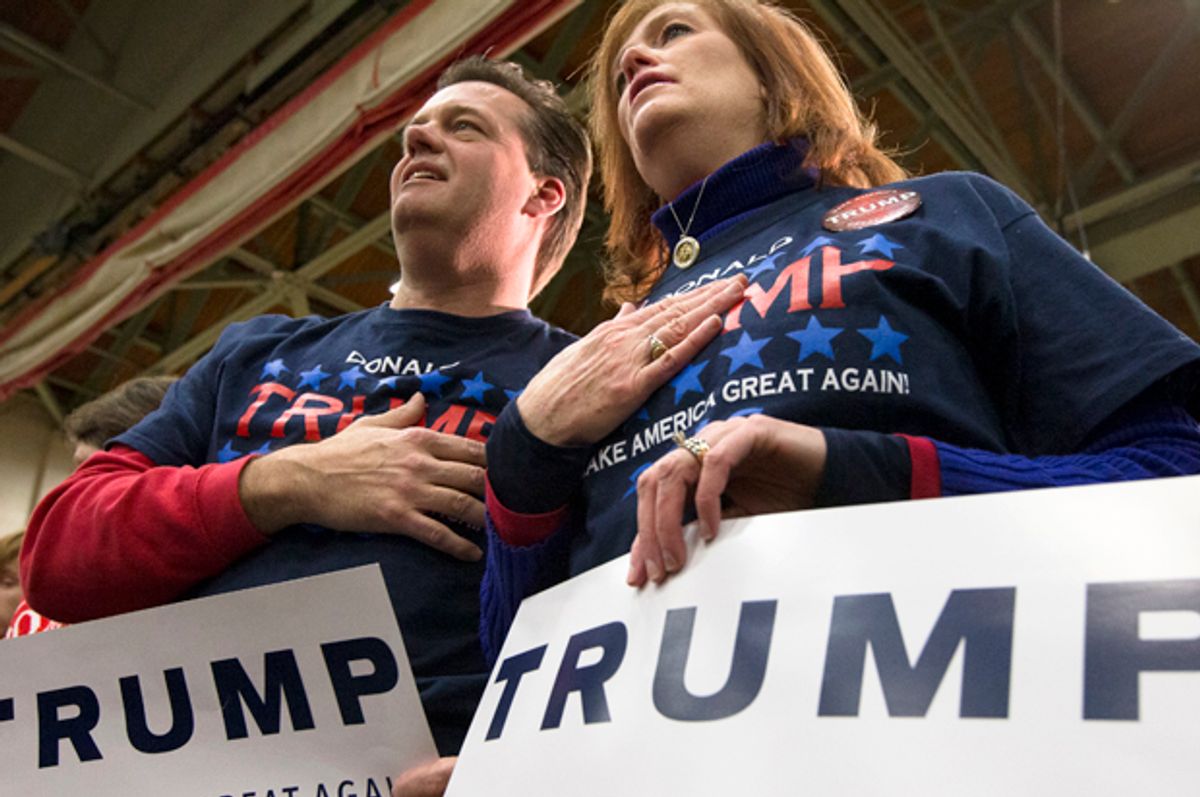 The final straw came when a teacher accused Alicia, a high school sophomore, of treason.

Alicia (not her real name) hardly comes across as subversive. She’s not one of those kids who is intrigued by anti-American propaganda from ISIS, for example, nor is she one who has been duped by homegrown anti-government groups calling for a citizens’ rebellion. She’s pretty much an ordinary, intelligent teenager—interested in politics, current events and government, but hardly a fringe radical.

Her offense in the eyes of her homeroom teacher, however, was that she chose to sit out the Pledge of Allegiance. This act, for Alicia and countless other young Americans, has brought on the wrath of authority, with teachers and school administrators unleashing mean-spirited accusations and hostility toward students who dare to question the wisdom of a daily loyalty oath. We may be a free country, but any kid who chooses to sit out the collective exercise of exalting America runs a risk of official ostracization.

I’ve spent the last year interacting with kids who have participated in the American Humanist Association’s boycott of the Pledge of Allegiance. The boycott is intended to raise awareness of the fact that the pledge, which was originally scripted by a magazine editor in 1892, did not include the words “under God” until 1954. The insertion of those two words has long irritated many Americans, particularly those who reject the notion of tying patriotism to God-belief, and the AHA’s boycott has been an effective strategy for educating many, especially young people, on the issue.

The Supreme Court in 1943 ruled that constitutional free speech principles guarantee public school children the right to opt out of the pledge, but many school officials need to be reminded of that precedent. As such, the AHA’s legal center, which I direct, spends lots of time helping kids whose teachers don’t respect the nonparticipation right.

And there are many of them.

In fact, the intolerance shown toward nonparticipating kids is stunning, enough to make one realize that the daily pledge exercise is far from a benign, unifying activity that instills healthy values. On the contrary, by the actions frequently displayed toward pledge nonparticipants by teachers and sometimes students, any objective observer would quickly conclude that the exercise is downright toxic, a nationalistic ritual that too often instills a venomous attitude of chauvinism.

We see several recurring themes in the attacks on pledge dissenters. Though some teachers will outright lie and tell students that participation is mandatory under law, most will acknowledge the voluntariness of pledge participation if confronted with a student who seems to know his or her rights. Still, however, teachers will often respond with the accusation that nonparticipation is “disrespectful.” Yet it’s not always clear who is being “disrespected” if a child opts out. The teacher? The class? The country?

Frequently the teacher will answer that question by saying that nonparticipation is disrespectful of the troops, as if any student not taking a daily loyalty oath—something no other developed country expects from its youth—is thumbing her nose at America’s military men and women. Here we see how the pledge is a tool of American militarism, with the clear message: stand each day and pledge allegiance, kids, because our fighting men and women are out there protecting your freedoms. Not surprisingly, no public school offers a daily analysis of the country’s foreign policy to offset this not-so-subtle message of nationalism and militarism.

The best response to the “you’re disrespecting our troops” accusation came from a pledge dissenter whose father is in the military. When this high school student confidently informed his teacher that dad fully supported him in sitting out the pledge, pointing out that there is no logical nexus between kids pledging allegiance and the idea of supporting the troops, the teacher was speechless.

Dealing with schools mistreating pledge dissenters is like a tour of duty in the culture wars, a visit to the trenches to see the other side at its ugliest. One discovers that critical thinking is the last thing that many teachers and administrators really want from their kids, who are expected to line up like lemmings each day for 13 years and vocally affirm the Establishment position of national greatness. With such an educational environment, is it any wonder that over half the population in 2003 wanted to rush to war in Iraq, believing Saddam Hussein was behind the Sept. 11 attacks?

George Orwell, an authority on groupthink if ever there was one, wasn’t fond of nationalism. In his essay on the subject he warned against “the habit of identifying oneself with a single nation or other unit, placing it beyond good and evil and recognizing no other duty than that of advancing its interests.” Nationalism distorts one’s sense of reality, Orwell wrote, as well as one’s sense of right and wrong. “There is no crime, absolutely none, that cannot be condoned when ‘our’ side commits it.”

Such unhealthy nationalism is cultivated when an entire population is encouraged to participate in easy symbolic gestures that validate national greatness. Anyone can stand and pledge allegiance and anyone can slap a magnet on their SUV to “support the troops,” but not anyone can learn the history that underlies today’s international situation and carefully assess policy options. Surely we need less pledging and more learning.

Ironically, the AHA’s pledge boycott is intended as a means of changing the pledge, not scrapping it. Seeing the dynamics of pledge recitation and dissent up close, however, and considering it in the context of a nation that seems increasingly unhinged socially and politically, the impact of a daily ritual that conditions kids to blind national loyalty is worth reconsidering. If there are concerns about anti-intellectualism and even fascistic tendencies in American society nowadays, the practice of daily national exaltation has relevance. If you truly love America and the values “for which it stands,” there’s only one thing to do: scrap the Pledge of Allegiance.