Teen Rahmaan Mohammadi says he was "interrogated" by police, who warned him not to talk about Palestine in school 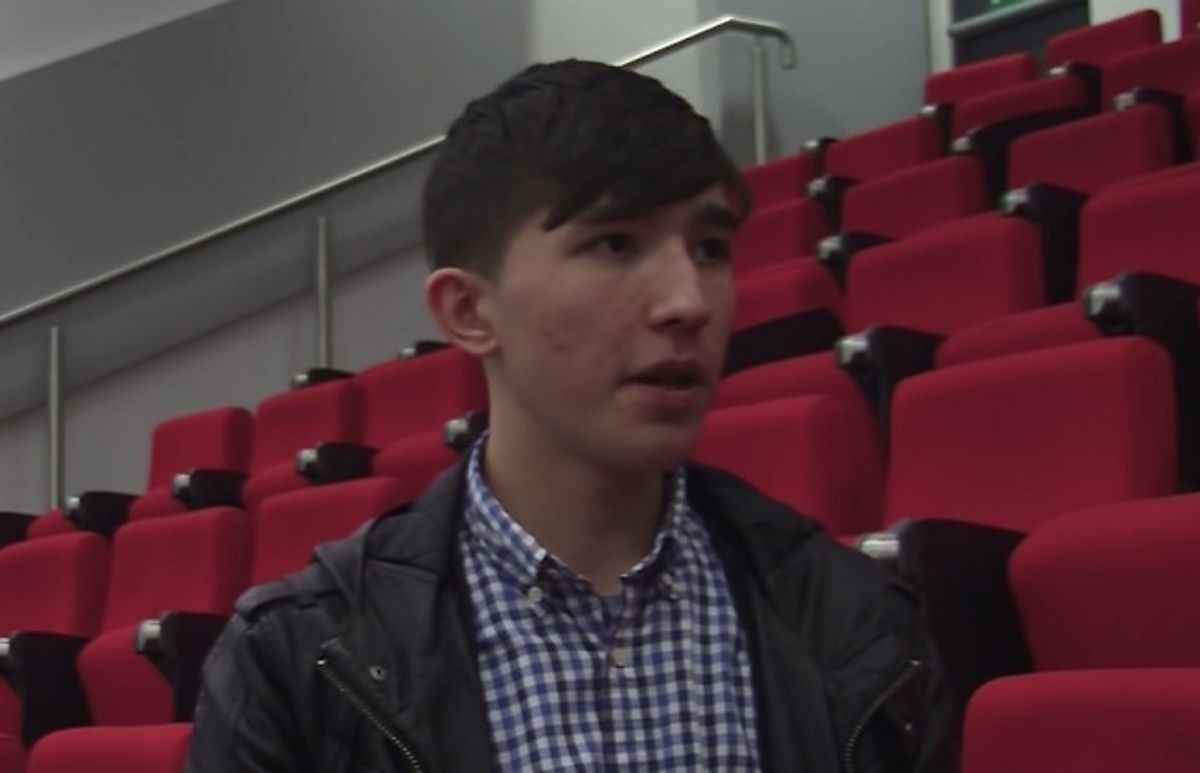 British teen Rahmaan Mohammadi was questioned by "anti-terrorism" police for wearing a "Free Palestine" badge to school, numerous media outlets in the U.K. have reported.

The 17-year-old student at Challney High School for Boys in Luton was referred to police by his teachers last summer. They cited Prevent, the U.K.'s so-called anti-radicalization program.

Mohammadi says he was characterized as an "extremist" and was "interrogated" by police, who warned him not to talk about Palestine in school.

He also says that school staff pressured his 14-year-old brother Rahmaan to tell him to "stop being radical."

In addition to wearing "Free Palestine" badges and bracelet, Mohammadi says he was treated as a criminal for bringing a leaflet to school from the non-profit Palestinian human rights organization Friends of al-Aqsa.

Friends of Al-Aqsa and as many as 25 other pro-Palestinian organizations recently had their bank accounts abruptly closed by the U.K.'s Co-op Bank. The bank did not give the newspaper The Independent a reason why it closed the groups' accounts.

Mohammadi spoke at Goldsmiths University in early February at a meeting of the group Students Not Suspects, which protests the government's Prevent campaign.

A recent report found that the British government deported 2,748 unaccompanied child refugees back to war-torn areas from 2007 to 2015, including 2,018 young Afghan asylum-seekers. Human Rights Watch says the deportations are "cruel" and "disturbing," and likely violate international law.

"As a Muslim, I fight for justice, the equality of freedom, and Prevent itself is fighting that. It takes basic human rights away," Mohammadi added.

Critics of Prevent say the program is racist, anti-Muslim and draconian. In 2015, hundreds of academics signed an open letter in The Independent condemning the program, saying Prevent has a "chilling effect" on free speech and dissent in the U.K.

Between 2012 and late 2015, more than 4,000 people were referred to Prevent, approximately half of whom were under age 18, including children as young as three years old.

"Prevent creates paranoia," Mohammadi told Britain's The Sunday Times. "When police come to your house and say, 'I want to speak to you,' with this massive folder with your name on it, that's intimidating. It makes you feel alienated."

Yusuf Hassan, vice president of the Federation of Student Islamic Societies, told the Huffington Post "Instead of allowing our young people to critique and explore their opinions on such issues, the government are policing thoughts with initiatives like that of Prevent."

"Would a child wearing a badge in support of the illegal Israeli settlements be treated in such a manner?" Hassan asked. He answered his own question: "I highly doubt it."

Students who support Palestinian human rights have faced similar repression in the U.S. The Center for Constitutional Rights and Palestine Legal documented this backlash in their report "The Palestine Exception to Free Speech: A Movement Under Attack in the U.S."

Between January 2014 and June 2015, legal advocacy organization Palestine Legal says it responded to nearly 300 incidents of suppression of Palestinian solidarity work, 85 percent of which was targeted at students and professors on more than 65 U.S. college campuses.

Palestinians have lived under illegal Israeli military occupation since 1967. In the past decades, Israel has accelerated its colonization of the occupied West Bank, expanding its illegal settlements and slowly taking more and more Palestinian land. More than 600,000 Israeli settlers now live in the occupied West Bank, including East Jerusalem, in what the U.N. says is a flagrant violation of international law.

For almost a decade, the Israeli government has also imposed a blockade on Gaza, maintaining effective control over everything that goes into the strip. U.N. experts have explicitly said the blockade is illegal. Supporters of Israel claim the Israeli siege on Gaza is legal, citing the U.N.'s Palmer Report, but human rights groups like Amnesty International say they are purposefully misinterpreting the U.N.'s statement.

Furthermore, legal experts say that, according to international humanitarian law, despite Israel's withdrawal of illegal settlers from the strip in 2005, Gaza is still under effective occupation, as Israel maintains control over Gaza's airspace, territorial waters, electromagnetic field and population registry, as well as most of Gaza's six land crossings. The U.S.-allied Israeli and Egyptian militaries also regularly fire at Palestinian fishers and farmers. Because of Israel's blockade and continuous wars, the U.N. warns Gaza will be "uninhabitable" by 2020.

The violence has escalated since October. Since then, close to 170 Palestinians have been killed by Israeli occupation forces or illegal settlers. 27 Israelis were killed by Palestinians in the same time period. The majority of attacks Palestinians carried out against Israelis have been in the illegally occupied territories.

OCHA reported in early January that roughly 14,000 Palestinians had been injured in the recent increase in suppression of protests or in raids by Israeli occupation forces.