How to build a revolution: How America can get a revitalized left (and why Bernie can't do it alone)

The Vermont senator has created a political sensation with his call for a "revolution." Here's what it really takes 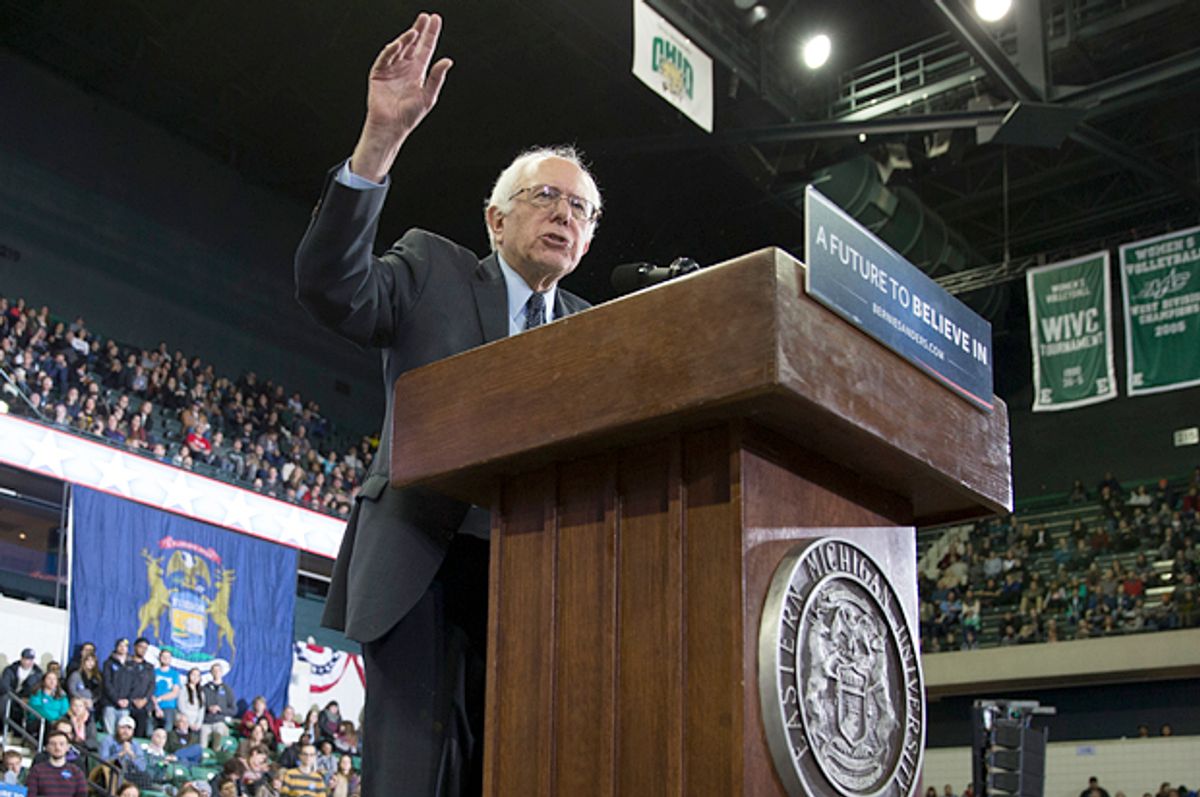 Flashback: It's debate night in New Hampshire, and Bernie Sanders is waiting impatiently for his turn. Beside him on the split-screen, his opponent, Hillary Clinton, looks perfectly presidential: Her body is still, her expressions are composed, her voice is firm but restrained. Sanders is notably less well-trained, less presidential. Bobbing and weaving, biting his tongue, visibly anxious, Sanders is hardly able to contain himself while Clinton speaks. When she finally finishes -- and it hasn't been that long -- the man uncorks. Possessed with a telegenic sense of deep injustice, Sanders embarks on a long recitation of all the screws being turned on the casual viewers back at home. He returns repeatedly to the subjects of our gross income and wealth inequality, the unchecked malfeasance on Wall St., and the corruption of our politics by massive influence-purchasing bribes masquerading as donations. But all of this is just the lead-up to what Sanders really wants to talk about, the central premise of his whole campaign, the sine qua non of his entire political theory: America can only see its way past these monumental problems if it embarks upon a political revolution of unprecedented scale. Only when millions and millions of people come together to upend the political status quo, Bernie suggests, will real progress be possible.

It's a stirring message that speaks directly to the disillusionment of so many young people, who understandably feel that politics and politicians are captured by the super rich, their representatives' values and ideals compromised by the pressure of the "permanent campaign," and by the enormous costs of running one. But Sanders' message also begs a fairly obvious follow-up: What does this "political revolution" look like? Is it even possible? And while many of those asking these questions are Sanders' fiercest critics, who likely find his brand of politics to be naive and idealistic, it's a question that his most ardent supporters must also consider. Because if Sanders manages to capture the presidency, he will face a Congress comprised of two hostile parties who both find the very implication that underlies his campaign to be noxious and personally insulting. How he navigates those murky waters, and whether he can leverage his political success into a much broader leftward tilt, will surely determine whether or not this nation can adequately accomplish his main ambition.

To the question of "political revolution," there is no easy answer. Standing in the way of even the most obvious first step -- putting actual left-leaning liberals into Democratic offices to help carry out his professed agenda -- are a number of profound challenges. Some are as simple and relatable as basic political self-preservation: Older moderate Democrats don't want to lose their jobs, and will fight tooth and nail to keep them. Other challenges are more complex: The Democratic Party is a melange of interest groups and demographics tenuously connected by a set of shared goals, but otherwise widely divergent in the techniques they'll employ and the allies they'll seek out along the way. A recent example is fairly instructive: In July of 2014, while the FCC was still taking public input on its proposal to reclassify broadband internet service providers as "Title II," an obscure bit of regulatory minutia that would help preserve net neutrality, a broad swath of old-guard civil rights groups opposed the proposal. (The FCC went ahead with the reclassification the following February.)

Why did the NAACP, the League of United Latin American Citizens, and the Urban League (among others) initially oppose this initiative? Perhaps they sincerely believed that reclassifying broadband internet providers would hurt communities of color, and therefore the stand they took -- opposed, as it was, to most other left-wing groups -- was principled and courageous. Or perhaps their motives were a bit more cynical. As Lee Fang wrote for The Nation at the time,

"The Minority Media and Telecommunications Council (MMTC) coordinated many of the participants in the anti–net neutrality filings sent to the FCC last week. Last year, the Center for Public Integrity published an investigation of MMTC, showing that the group has raised hundreds of thousands of dollars from Verizon, Comcast, the National Cable and Telecommunications Association and other telecom sources while reliably peddling the pro-telecom industry positions."

This is not intended to single out these groups as especially cynical or opportunistic. This kind of donor/interest group glad-handing is all too common in our political system, particularly when the issue at stake doesn't seem to relate directly to the larger cause being advanced -- i.e. as long as the individuals running these groups don't think they'll get blowback from their members. But when trying to imagine a national, unapologetically left-wing political movement in the model that Sanders envisions, we must grapple with the inherent roadblocks that our system's heavy reliance on corporate cash will put before us, including the craven willingness to compromise one tenet of the progressive movement in hopes of preserving another.

There is another problem, too: Most Democratic politicians aren't left-wing, and their biggest donors clearly prefer it that way. (The Center for American Progress isn't trying to primary Nancy Pelosi or Harry Reid, after all.) To compound matters, most Americans still shy away from the dreaded "liberal" moniker (though that is slowly shifting, as young Americans less hostile to the word come of age). According to a recent Gallup poll, the share of Americans who identify as "liberal" has climbed to a paltry 24 percent -- the highest share in at least a quarter century, but still far lower than those who self-identify as "moderates" or "conservatives."

Still, for years those on the left have questioned those numbers, pointing out that Americans tend to favor liberal policy positions and programs even as they refuse to self-identify with the name. Lots of Americans are liberals, the argument goes, they just don't want you to call them that name. (Some might even remember the 2004 presidential debate, when John Kerry couldn't run from the "liberal" moniker fast enough.) Sanders' early success among working-class whites suggests there may be some truth to this narrative. And Sanders' supporters have little choice but to accept the premise anyway, given that it's essentially what his whole campaign strategy is premised upon. A country where less than one quarter of its citizens call themselves liberal probably won't elect a socialist any time soon -- unless something else explains those poll numbers.

The ability to raise an incredible amount via small, individual donations is one of the primary reasons that the national media has begun taking Bernie Sanders seriously. And while personal donations can do incredible things for a national candidate, it's hard to imagine the Bernie-model working for the more local left-wing candidates he'll need to bring about his "revolution." In the 24 hours following his New Hampshire victory, Sanders raised an astounding $7 million (in ~$30 increments). That's an incredible and encouraging figure, but it's also less than a quarter of what was spent on judicial elections just in the year 2012 alone. Those small donations that Bernie received were also helped along by the enormous amount of free publicity (ahem) that presidential candidates enjoy -- something that can't be relied upon even for Senate or House seats. How many of Bernie's supporters in Maine really want to contribute to the election of a left-wing judge in Michigan, where $13 million was spent in '12? Left-wing Democrats may well be willing to open their wallets for their preferred local candidate, but that's only likely to make an appreciable difference in places where there are a large number of left-wing Democrats who can afford to make political donations -- which is to say, the places where Democrats are already most likely to lean left.

Ironically for Sanders, the best hope for young, progressive Democrats may reside outside the party he's so recently joined.

When looking for examples of unapologetically left-wing politicians, all too often we find ourselves on the outside of the Democratic Party looking in. Whether it's Kshama Sawant, the Socialist Alternative city councilwoman from Seattle widely credited with the city's early push for a $15/hour minimum wage, or Bernie Sanders himself, who wrote an impassioned Op-Ed for the New York Times in 1989 decrying the "tweedle-dee tweedle-dum two party system," left-leaning politicians have had some success in recent years when they free themselves of the constraints that major parties require. Part of it is just avoiding the cynicism and disillusionment among the electorate that the two-party system often incubates. "Given the level of the current political debate," Sanders observed way back in 1989, "the interesting question is not why half the people don't vote but why half the people do."

Want to put enough pressure on Democratic party apparatchiks to get them to follow through with the courage of their professed convictions? It helps to have someone to their left willing to call them out on their hypocrisies and contradictions, should the need arise. I asked radio host and longtime left-wing writer Doug Henwood if going outside the Democratic Party was the right strategy: "I think we need an inside and outside strategy."

"We need people who are maybe organizing 3rd parties, or organizing around specific issues. At the same time, you've got people who are inside the Democratic Party trying to transform it. I think each can help the other -- if they can work together somehow."

All of this is an extremely long-winded way of saying "it ain't easy." And it won't be. What's encouraging is that Sanders himself seems aware of the huge commitment he's asking of his supporters. As he wrote in a press release ten months before declaring his candidacy, "Now is the time to create a government which represents all Americans, and not just the 1 percent. No more excuses. We must all become involved in the political process."

Can he accomplish his lofty ambitions? That depends entirely on whether his faith in those who believe in his message is well-placed.